This is a follow-up to the post I wrote last week about the latest data on real median household income.
One of the things I notes is that “households” includes the millions that are composed of retirees, a burgeoning demographic due both to healthier longevities and the demographics of the Boomer generation.
This morning Jared Bernstein helpfully includes a graph of real median household income excluding those over age 65: 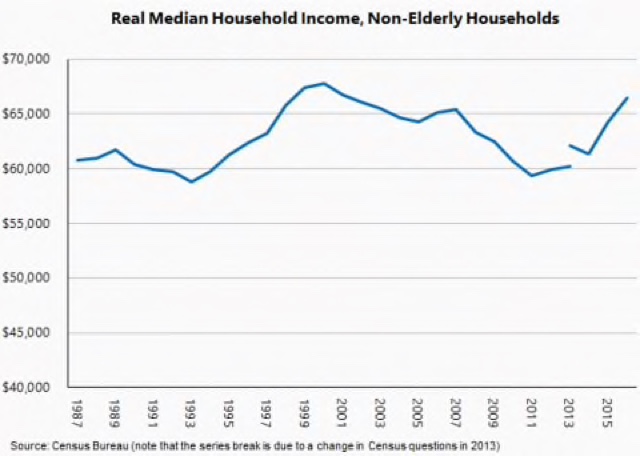 Households headed by working age adults did finally surpass their 2007 income, but were still 3.4% below the all-time highs of incomes of 2000.

But mainly I wanted to follow up on that break in the graph in 2013.  It was caused by a change in methodology by the Census Bureau.

Hurricane Harvey has already affected some of the August data releases.  Irma has already started to affect some weekly releases, and will undoubtedly affect the September monthly releases.
I have already begun to adjust for the hurricanes in the case of initial jobless claims.  But what of the monthly data?
While there is nothing so timely and precise as backing out affected states from the initial jobless claims report, there are workarounds that can at least tell us if there has been any significant change in trend for both the industrial production and housing reports.
I will put up separate posts, but to cut to the chase, we can use the Regional Fed reports (minus Dallas, and adding the Chicago PMI) to give us a reasonable estimate of industrial production in the non-hurricane affected areas. Similarly, we can make use the regional breakdowns in the housing report by subtracting the South and determining the trend in the remaining 60% of the country outside of that census region.  I have already looked at this morning’s housing report, and it turns out the effect is not what you would think!  I’ll have that post up by tomorrow.
Unfortunately there is no regional or state-by-state breakdown of retail sales or regional consumption expenditures on any sort of timely basis, so we’re kind of stuck there.
Read More > 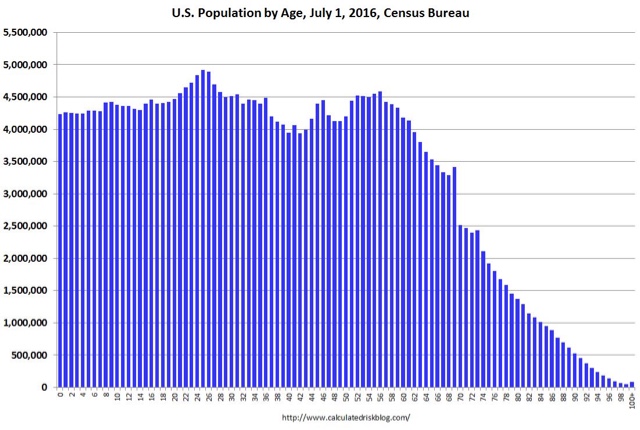 Another problem with the metric is that it is only reported once a year, and with a nine month delay to boot. So this week’s data release tells us what household income was for the period of 9 to 21 months ago! Not exactly timely.
Fortunately, there are several ways to get more timely data.
Read More >

How to kill Social Security in 2 easy steps

the best way to address retirement security is to continue reforming 401(k) plans and to expand Social Security—but only for low-income workers. Middle-class workers are generally doing reasonably well, and certainly as well as they did in the past. We don’t need a massive and expensive expansion of Social Security for everyone, but we do need to make Social Security more generous for the bottom quarter or so of the population that’s doing poorly in both relative and absolute terms. This is something that every liberal ought to support, and hopefully this is the bandwagon that President Obama in now on.

Step 2:
Now that 3/4 of the population will be paying into a system to transfer their income to the bottom 1/4, you have instantly created a majority constituency that will benefit from killing the now-welfare program.
Why does Kevin Drum want to kill Social Security?
Read More >

Last week I promised I would repeat an exercise I first undertook in 2012 when Superstorm Sandy disrupted the initial claims data: estimating what the initial jobless claims would have been, but for the hurricane.

In 2012 I created that adjustment by backing out the affected states (NY and NJ) from the non-seasonally adjusted data.  That gave me the number of initial claims filed in the other 48 states.  I compared that with the same metric one year earlier, and multiplied by the seasonal adjustment.

What that does is give me the number if the affected states had the same relative number of claims during the given week, as all of the unaffected states.  In 2012, it showed that Sandy was not masking any underlying weakness in the economy.

The state by state data is released with a one week delay.  So what follows is the analysis for the week of September 2, the number for which was reported one week ago. This week I only had to back out Texas.  Next week I will undoubtedly have to back out Florida as well.

Here is the table for the Week of September 3 in 2016 vs. September 2 this year:

Thus the hurricane-adjusted initial jobless claims number for the week of September 2, 2017 is 239,000.

A note on Hurricane Harvey and unemployment claims

A note on Hurricane Harvey and unemployment claims

Initial jobless claims for last week were reported at 298,000 this morning, a jump of over 50,000 from recent levels.

As most people probably already know, this huge jump had everything to do with Hurricane Harvey shutting down southeastern Texas, including the entire 7 million Houston metro area. Undoubtedly, the effect will last for weeks.

Fortunately, if we want to know what jobless claims would be ex-Harvey, there is a way to figure that out.  Although I haven’t felt the need to dwell on weekly claims for several years now, I’ll start to calculate this again next week.

I did this before, in 2012, after Superstorm Sandy.  Here’s how I described the process then:

To do the same thing for Harvey, I’ll simply calculate the number for all states except Texas.  Because the state by state data is reported with a one week delay, that won’t be until next week.

Of course, I might have to account for Irma and maybe even Jose in the next few weeks as well.  But, one bridge at a time . . . .

As promised, here is my abbreviated and late take on this morning’s employment report.

While the additions to temporary positions (a leading indicator for jobs overall), and construction, and manufacturing jobs were welcome, this report sure looked like late cycle deceleration.

The number of people not in the labor force who want a job shot back up:

Those who are involuntarily part-time went sideways:

Trickle-down, with the emphasis on “trickle”

Trickle-down, with the emphasis on “trickle”

Since the turn of the Millennium, a torrent of corporate tax cuts has resulted in a trickle of investment growth.

This morning Dean Baker objects to:

the argument … that reducing corporate taxes will lead to more investment and thereby greater wage growth in the future. The data from the last seventy years show there is no relationship between aggregate profits and investment.

As can be seen, there is no evidence that higher corporate profits are associated with an increase in investment. In fact, the peak investment share of GDP was reached in the early 1980s when the after-tax profit share was near its post war low. Investment hit a second peak in 2000, even as the profit share was falling through the second half of the decade. The profit share rose sharply in the 2000s, even as the investment share stagnated. In short, you need a pretty good imagination to look at this data and think that increasing after-tax profits will somehow cause firms to invest more

I was a little puzzled why Dean didn’t differently scale the two series so it would be easier to see any leading/lagging relationship.  Further, since corporate profits are a long leading indicator, and nonresidential fixed investment is more of a coincident indicator, I was pretty sure that there would be a correlation.

Notes on Harvey: if Karma could bring her litter to visit the Texas GOP

Notes on Harvey: if Karma could bring her litter to visit the Texas GOP

First of all, as many of you already know, the M.I.A. proprietor of Bonddad blog, Hale Stewart, resides in the Houston area.  I traded messages with him on Saturday, and as of then, he was doing OK.

Secondly, when Superstorm Sandy hit New Jersey and New York, Texas Republicans were prominent among those who opposed aid.  Ultimately aid was provided — but not until 75 days after the storm.

There were two Sandy-related aid bills.

The first bill granted FEMA a $9.7 billion increase to borrow for the National Flood Insurance Program. It passed the Senate on a voice vote, but the following Texas GOP Members of Congress voted against the aid:

The second bill provided $17 billion emergency funding to the victims and to affected NY and NJ communities.  Both Texas Senators Ted Cruz and John Cornyn voted agains the bill.  In addition to all of the above Representatives, the following Texas GOPers also voted against this aid:

Now that it is Texas suffering a catastrophe, of course some of these same politicians will be at the front of the line braying for help. While with the GOP in control of the entire federal government, Karma will not be paying a visit with her litter, in a just world aid would be provided immediately — on the same day they all visit NY and NJ, apologize, and abjectly beg forgiveness.

Of course, the “better angels” will prevail this time. But rest assured, the next time a disaster befalls anywhere in the Northeast, these same Texas politicians will once again vote against aid. In the meantime, above is the Roll Call of Shame for posterity.

An economy on autopilot between Scylla and Charybdis

An economy on autopilot between Scylla and Charybdis

Interest rates are a vital determinant of longer term growth. While the economy has remained on autopilot for the last several years, with almost no political stimulus or disruption — though that may well change next month — the Fed has to steer a course between the Scylla of an interest rate spike and the Charybdis of an inverted yield curve.  The Presidential election spike in long term interest rates has been enough to cause growth in the housing market, whether measured by permits, starts, new or existing home sales, to stall out. Meanwhile the several hikes in the Fed funds rate has cause a slight flattening of the yield curve.

So while it is somewhat welcome that longer term interest rates have fallen back below 2.20%f and mortgage rates below 4%:

that just means that there is less of a spread between longer term and shorter term yields.