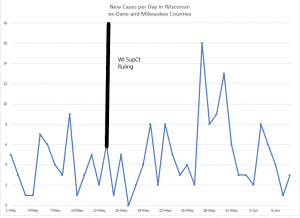 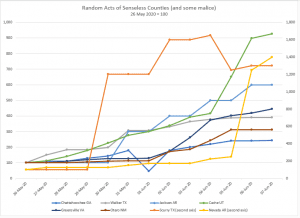 In this brief 30-minute webinar, we will step business owners through the liability concerns when reopening following the COVID-19 shutdown. Bobbi Berkhof will inform entrepreneurs why following local, state, and federal recommendations may help protect the business from lawsuits, potentially stemming from employees and customers. 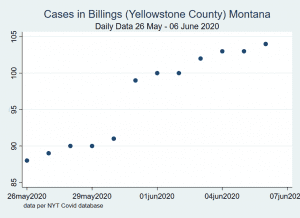 Or, in table form: 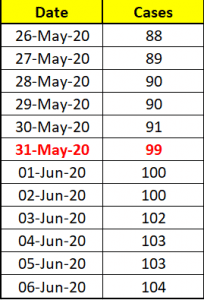 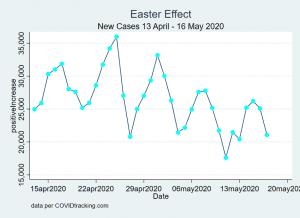 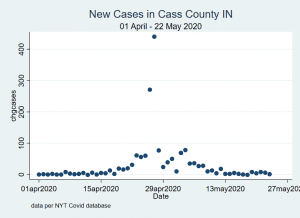 I’m back to playing with data, so there will probably be more posts coming soon. (Sorry.)

Meanwhile, this one was irresistible. FRED® has a “Natural Rate of Unemployment” data series. Apparently, the evil of the United States is that—except for the second half of the Clinton Administration where it was worth people’s while—Americans Just Don’t Work Enough,

What happens when you downsize a large number of people? Well, it depends on the cohort downsized. In this case,

For context, that one-month change matches the average hourly earnings growth from September/October of 2018 until March of this year–18 months of increases in a month. And all it took was eliminating the jobs of about 6% of the U.S. population (not just workers).

It’s That Day again. I mostly stayed off Facebook (except for birthday greetings) and Twitter, but even LinkedIn has posts of now-yellowed newspaper articles of survivors–and probably some of those who didn’t.

At least now, most people know what a sh*t Rudy Giuliani was, both in setting up the firefighters for disaster and moving the NYC Office of Emergency Management Command Center from the safest location in the city–the basement of 1 Police Plaza–to the 23rd floor of a building in a complex that had already been bombed once before he did it. While he and Bernard Kerik got to Be Adulterers on taxpayer money, somewhere between one-third and one-half of the 343 firefighters they murdered outright certainly could have been saved. Though that would have been more people who, but for the grace (and anger) of Jon Stewart, would still be trying to get health care. Rudy’s tombstone should read: ““This group’s finding is that the security of the proposed O.E.M. Command Center cannot be reasonably guaranteed” — July 1998″

Yes, I’m still bitter. No, I’m not going to post anything nearly as subtle as this, which is probably my ultimate contribution to the genre of In The Shadow of The Towers. I’m going to talk about Milton Friedman. Because it’s the 18th anniversary, so it’s now old enough to vote–or, especially in the pre-26th Amendment world–be drafted.

Let’s be clear: Milton Friedman had one good idea in his life, and that was that his alma mater should not sponsor a football team. Even a broken clock, and the program whose highlights are Ray Rice and Greg Schiano (whose skills included guiding the team to a money-losing Bowl appearance) isn’t exactly something that could justify Superstar Economics Theory.

Milton Friedman, like Gary Becker, was wrong about almost every social policy recommendation he made. While it might be difficult to identify what he was most wrong about, a leading contender is The Elimination of the Draft, which he championed for years and finally shepherded through the Nixon Administration.

After all, people should be Free to Choose, and conscription is certainly not a “choice.” Choice can discriminate; conscription means mandatory attendance or a demonstrable reason to be excused. Friedman’s ghost, twirling at Mach 3 in the Eighth Circle, probably rues that males still must register for Selective Service.

So we have a story published just over two years ago on America’s only remaining news source becoming evermore real. While before people who didn’t want to be subject to two years of training and possibly warfare had to at least come up with a somewhat reasonable excuse (*cough* bone spurs *cough*) or face jail time, the scions of the elite have no “skin in the game.” So the Longest War in U.S. History continues: planned as well as it was executed, executed as well as its objectives were planned. While the planners well know that their sons (and daughters) will not even have to come up with the lies they did to avoid any chance of being killed.

Because Milton Friedman said that would not be Freedom. And people believed him, because “freedom” means you don’t have to “have skin in the game” (literally, in this case) if you don’t want to, even if your actions caused the problem.

Projection is an Art, not a Science, especially for the SSA

The scary headlines of the past few days have been well-discussed below by Dale Coberly and Barkley Rosser.

Data, however, is only as good as its assumptions, and the overall trend is well worth a glance. (Note: I took the 2013-2017 data from BC professor (and director of their Center for Retirement Research) Alicia H. Munnell’s Table 1 here.

Note that last year’s projection that 2018 would have a funding shortfall turned out to be so incorrect that this year’s report didn’t even pretend there would be excessive demand until next year.* Also note that, despite a relatively anemic recovery in the labor force, the projection “we’re out of funds” date keeps getting extended, though not so much as it did pre-Tepid Depression years.

More coming up. As usual, the report is only so good as its data assumptions and there are some interesting assumptions made.

*Part of this, as Henry Aaron noted Tuesday, is that the Disability portion of SSDI has declined precipitously from projections.

What a Difference Three Days Makes?

TEGUCIGALPA (Reuters) – The United States said on Wednesday it had reached an agreement with three Central American countries to carry out joint police operations in the region, as the Trump administration seeks to stem the flow of migrants across its southern border.

The governments of Guatemala, Honduras, El Salvador and the United States said in a statement they had agreed to a series of measures, including joint police work, improved border security, and efforts to deter international crime and curb “irregular migration.”

WASHINGTON/EL PASO, Texas (Reuters) – The U.S. government cut aid to El Salvador, Guatemala and Honduras on Saturday after President Donald Trump blasted the Central American countries for sending migrants to the United States and threatened to shutter the U.S.-Mexico border.

A surge of asylum seekers from the three countries have sought to enter the United States across the southern border in recent days. On Friday, Trump accused the nations of having “set up” migrant caravans and sent them north.

As I have said before, it’s fairly easy to understand how the man went broke running casinos, even without noticing that Atlantic City is a drab and dreary place in the Winter.

The Bank is the Colour of Malpasspractice, not Dead Televisions

If you want to understand why Mark Thoma’s 12-year daily-and-then-some blogging effort has become intermittent, consider that President Shit-for-Brains has made his nomination for the person to ru(i)n the World Bank.

The best part of the nomination so far? This Twitter feed from Charles Kenny.

And I’m not the only one bringing back my writings from almost a decade ago. David Glasner at Uneasy Money remains in fine form. (via Krugman on Twitter)