China Is Selling More EVs Than the US 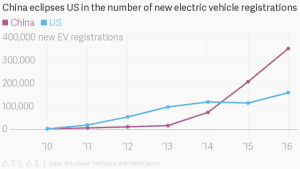 The electric car is becoming prominent China. China registered as many as 352,000 new electric vehicles (EV) in 2016 compared to 159,000 cars registered in the US during the same time period and mostly in California.

Automotive analysts suggest China’s numbers could be inflated due to subsidy cheating: but, even the lower estimates remain higher than the US. Navigant Consulting puts China’s 2016 figure at an approximate 250,000, but, it expects new registrations will nearly double this year in 2018.

China wants 11% of all vehicle sales to be EV by 2020 and would add up to 3 million sales annually. It is thought most of the next generation will never own a gasoline powered vehicle.

Two Wheelers:
Electric two-wheelers have transformed the way people move in most Chinese cities. In just ten years, the growth in the electric two-wheelers category (that includes vehicles ranging from electric bicycles to electric motorcycles) has increased the total number of vehicles in China. Electric bike sales began modestly in the 1990s and started to take off in 2004, when 40,000 were sold. Since then, over 100 million have been sold and now more than 20 million are sold each year. Electric two wheelers, in short, represent the first mass produced and adopted alternative fuel vehicles in the history of motorization.

Batteries:
Cobalt is a key ingredient used in lithium-ion batteries to power everything from Apple products to Tesla cars. As it happens, the great cobalt boom of 2017 follows a bumper year for lithium, which rose by around 80% in price in 2016. More than 60% of the world’s Cobalt reserves are in the Democratic Republic of Congo making it one of the hardest things to get a supply of today. The Republic of Congo uses children labor as young as 5 years old to mine the mineral. Many companies have signed agreements not to use minerals mined in the DRC.

The shortage of Cobalt has promulgated a rise in pricing and an investor can make a serious amount of money in a short amount of time by buying cobalt. The price per ton of the metal has soared by almost 70% this year, driven by demand for rechargeable batteries in EVs.

In the mean time, US automakers continue to invest in more efficient gasoline driven larger vehicles such as SUVs and trucks. Many of them are eliminating automobiles as demand has decreased. We have been down this path before when foreign automakers started shipping more smaller vehicles to the US to fill the gap. I suspect we will see the same happen in the near future.