The more leading numbers in the report tell us about where the economy is likely to be a few months from now. These were mainly positive. 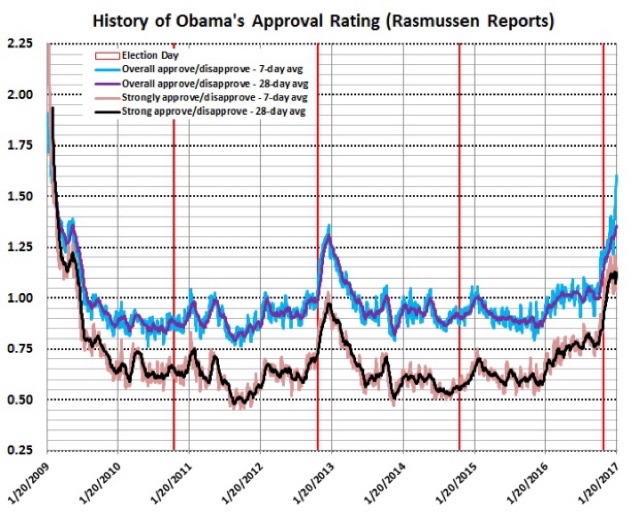 Since this year the Doomers haven’t even been able to rouse themselves up enough to call for OMG recession imminent!!!, they have had to settle for how slow the growth in the economy has been.  Their favorite theme has been the alleged divergence between the “soft” consumer confidence and ISM survey data, and the “hard” data, like industrial production:

Well, then, how about durable goods?  Since it was just updated this morning, let’s take a look at that:

The use of the term “neoliberal” has recently been criticized as a meaningless epithet, a tabula rasa used to disparage anyone deemed unsatisfactorily conservative.

To the contrary, I think the term “neoliberal” is fairly precise, but much like the term “liberal” itself, it has two quite different meanings depending on whether the definition descends from its original European or American incarnation.  The first variety is very right-wing. The second is centrist.

A good description of right-wing neoliberalism can be found in this article in Al Jazeera this past weekend on a right-wing awakening in Latin America:

[N]eoliberalism is … a means to an end. The state is purposefully reduced in its scope of action to a minimum – by way of policies associated with fiscal austerity, financial deregulation, free trade and the privatisation of public assets, among others – so nothing can prevent the market and its profit-oriented agents from reaching a fair point of equilibrium between demand and supply. According to those who advocate such perspective, the state is nothing but a “necessary evil”.

[R]ight-neoliberalism is the claim that social democracy was one huge mistake–that it created a North Atlantic of takers who mooched off the makers. It holds that if we got rid of social democracy, we would have a utopia because the makers wouldn’t have to carry the takers on their backs and the takers would shape up ….

This right-wing meaning, of “neoliberalism” is a reincarnation of European-style 19th Century laissez-faire liberalism, a belief that the ideal state should operate and be limited by the rule of law, and administered by neutral officials selected on merit, with the economic markets left to themselves without interference by government. Nineteenth century liberals had no problem with, for example, government  promotion of infrastructure, including things like sanitation and education. Right-wing neoliberals, by contrast, see all government bureaucracy as inherently evil — even, as we saw in the case of Flint, Michigan, in the case of basic sanitation.

Note that right-wing neoliberalism is similar to, but not quite the same as, “libertarianism.” Libertarians believe the state also has no business in the private sphere of people’s lives. Thus it should stay out of the bedroom as well as the boardroom.  Not necessarily for right-wing neoliberalism. Right wing liberalism is agnostic as to whether foreign policy is passive or imperialistic, and whether or not government intervenes in the social sphere, so long as it stays out of the economic sphere.

The second type of “neoliberalsim,” centrist neoliberalism, originates from the US meaning of liberalism, and is once again defined pretty  well by Brad DeLong:

1. Most of the time the best way to accomplish social-democratic ends will be to get the money to the people who maximally want those ends accomplished, and then let them spend it.

2. Most of the time the best way to correctly manage the market system so that it doesn’t rain destruction upon the land is to impose the appropriate anti-destruction-raining Pigovian taxes (and subsidies).

3. Most of the time command-and-control is strictly dominated by other modes of government intervention that are less vulnerable to naked rent-seeking by the politically influential.

Today marks half a year since Donald Trump took the Oath of Office as President.  I just wanted to note that, so far, absolutely nothing of significance has been enacted to affect the economy.  It’s still basically Barack Obama’s expansion.

Of note, where have all the Doomers gone?  Zero Hedge has turned into a Trump + Putin fanboi club. The left-wing purists who were sure that everything stunk and the next crash is right around the corner have moved on to other things.  The writers who had been bleating about imminent recessions – almost every year since 2009 – are now just talking about very slow GDP growth.  I’m almost tempted to become a contrarian!

Basically, everything of note is positive, although much has been or is decelerating.  Over the next 6-12 months, if Washington leaves the economy alone, I expect job growth to continue, the unemployment rate to decline a little, prime age labor force participation to increase, and nominal wage growth to remain steady if participation increases a lot, and maybe increase more if participation only increases a little, although the positivity of most of these things will probably decelerate.

One eighth of the way through Trump’s presidency, Obama’s autopilot is still engaged.

There was some economic news last week which is important for the long term, and I’ll try to post about it later today or tomorrow, but in the meantime …
I’m as interested in the latest Trump-Russia tidbit as the next person, but really, don’t we all already know the endgame?

Remember during the campaign, no matter what devastating gaffes Trump made, he always rebounded into the low 40%’s? Well, about the same thing has been true for the last 5 months.  No matter what the news, Trump’s approval rating is 38% +/-3%:

So here, as a public service, to save you all the sturm und drang of the next 3 years, I present you in narrative form with the endgame:

I am currently reading a comprehensive tome on 19th century European history, “The Pursuit of Power,” by Richard J. Evans.
One episode that made a big impression on me was the decision by Otto von Bismarck (no conservative he) upon the establishment of the German Confederation, to eschew property qualifications for the franchise for the Reichstag and embrace universal male suffrage (p. 257).  Why? In so doing, he “bypass[ed] the liberal middle classes to appeal to what he assumed were the loyal and conservative masses in the countryside.”

I was reminded of Bismarck’s shrewd insight upon reading a post by Dietrich Vollrath:  “The return of the peasant mentality.”

[W[hen people move from rural to urban, or urban to rural places in these countries, do their wages change?….
The combination of facts tells you that there is selection out of rural/agricultural work and into urban/non-agricultural work for people with lots of human capital. There is not some distortion that prevents rural people from moving to higher wage positions, apparently, its just that all the really skilled or smart people move off the farm.

What’s really interesting is that this pattern shows up in the Raven’s Z-scores …. a crude, but effective, proxy for IQ….  So it’s not just that people who are lucky enough to get an education in an urban area stay there, and people unlucky enough to miss out on schooling in rural areas stay there. People with better measures of inherent smarts tend to end up in the city, or are in cities to begin with.

Perhaps we should take seriously the idea that peasants are really different, not just in their constraints (which the development literature …, but in their underlying preferences as well ….

One sees the pattern repeating over and over, across all sorts of societies, from the Spanish Civil War of 1937 to most of Mexican history. A decade or so I read that many of the Chinese immigrants to the U.S. in the late 20th century were Fujianese.  What distinguished the leavers from the stayers?  More than anything else, it was the propensity for risk-taking.

While we are waiting for tomorrow’s employment report, here’s a little something to chew on. In the immediate aftermath of the Presidential election — as in, by the end of that week — Gallup’s measure of economic confidence soared, from its 2016 average of roughly -10 to a positive number and to nearly +10 by the end of November:

In fact, while the confidence of Democrats sank, the confidence of GOPers skyrocketed even more. Since I have very little faith in the GOP agenda to deliver any uptick in growth, I have been watching and waiting for this confidence to ebb.  It did somewhat beginning in March, but never to the point of coming close to that in the final year of Obama’s term. (For the doubters, consider George W. Bush’s economic policies.  Despite being the most right-wing since the 1950s, we had the weakest post-War jobs and wage growth on record, and a weak GDP to boot. Where was the trickle-down?) Until last week.  Last week Gallup’s economic confidence index fell to -7:

Once more on vaccine hesitancy

Half a Century Passed to Rediscover Trickle-Up Economics