I have been looking at the data recently to find economic series that would quickly reflect the impact of rising tariffs on the consumer.

One is Retail Sales: GAFO.  Think of it as department store type merchandise  — goods excluding autos, food and energy. It is reported every month in both the Census retail sales press release and in the BEA measures of retail sales they compile in putting together personal spending and GDP.  I have long preferred the BEA data because it provides very detailed measures of retail sales and real growth. Moreover, the practice of some to deflate the Census retail sales data with the CPI overstates retail price increases and under states real sales growth. 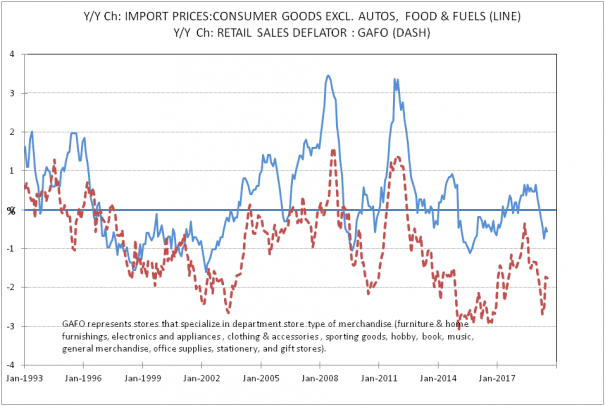 However, there is a problem with using the price index for imports as a measure of the impact of tariffs. It is a measure of prices FoB,  or freight on board. So it does not include tariffs that are added as the merchandise moves through customs. In the current environment importers reaction to tariffs could show up here.  One, if China absorbs some of the price increase while consumers would see higher  import prices, this measure of import prices would actually fall  as it shows prices China receives. Alternatively, if production is shifted to other countries their prices could be higher that the original Chinese price but less than the new Chinese price including the tariff. In this case, this measure of import prices would rise. So we do not know ahead of time how this price index will change. 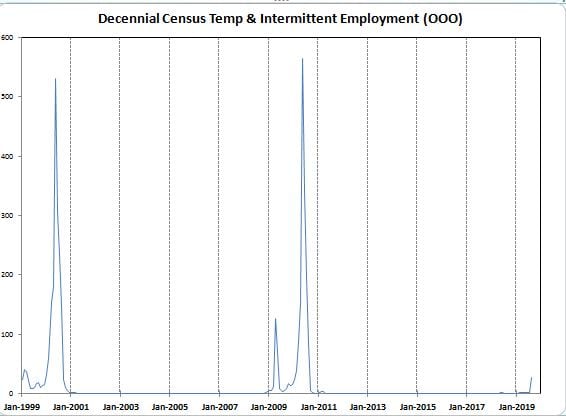 For seven years from 2012 to 2018 the monthly payroll employment showed a solid trend of around 200,000 gains each and every month.  If it was much above or below this trend, analysts found some excuse to explain the difference and expected the off-trend observation to be quickly reversed.  So far this year most analysts continued to act as if this pattern was being repeated.

However, in August the Bureau of labor Statistics (BLS) rebenchmarked the data to more recent Census data. They announced that it would lower reported employment growth but they did not release the revised data until the August employment report last Friday.  The new data shows that 2019 payroll employment was significantly weaker than originally reported. The January monthly increase was still around the old 200,000 trend.  But in the seven months from February, 2019 to August,2019 the average monthly gain was only 123,000, roughly 60% of the old trend. Moreover, the 12 month moving average fell from 225,000 in January to 165,000 in August and every observation from February to August was below the still declining  12 month moving average.

Seven consecutive months should be enough to clearly demonstrate that trend payroll employment growth has fallen to a new, significantly lower trend than the old 200,000 trend. 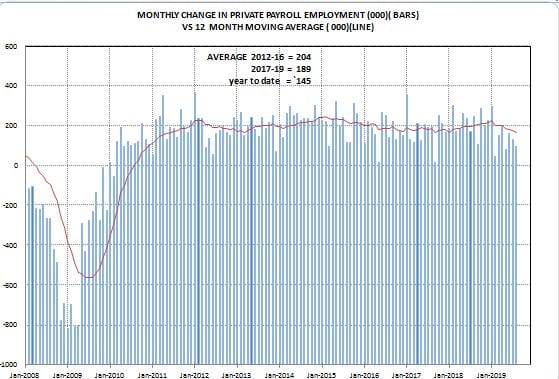 Analysts tend to focus on the month over month change so it was understandable that they did not notice that the revised data was showing much more weakness than the old data. Remember,guessing monthly economic releases was a game created by the brokerage house, especially the bond houses, to generate volume because their earnings was much more sensitive to volume changes than other variables.

As of the second quarter the year over year percent change in real GDP is 2.3%.  Virtually everyone refers to this as strong. Why?  By historic standards 2.3% real GDP growth is subpar. It is below the long term growth rate of the economy using virtually any widely accepted estimate of trend or potential growth. Many republicans actually claim that the potential growth rate is now 4%. If so, it would only make Trump’s 2%-3% growth look worse.

In 1967, real GDP growth was 2.7%, significantly stronger than the current rate.  Yet, that was labeled as  a GROWTH RECESSION.  In Obama’s second term, after the recession and economic recovery, his economic expansion averaged 2.4% growth, or essentially the same growth Trump has experienced during what is actually the same economic expansion. But Obama’s record was almost universally labeled as weak growth and Trump’s as strong. Trump recently bragged that the economic expansion just passed ten years, to become the longest in US history.  But  seven and a half years of this was under Obama and only two and a half years have been under Trump. Virtually all the data says that current growth is just a continuation of the trends established under Obama.  To date Trumps policies have had essentially no impact on economic growth. In this expansion  the strongest q/q SAAR was 5.5% in IV 2014 and the strongest  y/y growth was 4.0% in first quarter  2015–both under Obama.

I can understand Trump and the Republican propaganda machine calling 2.4% growth weak and 2.3% growth  “THE STRONGEST ON RECORD” as Trump repeatedly does.

But why do we let the media and many economist get away with repeating this republican propaganda.  Shouldn’t we be calling them out every time they do this,  for practicing such sloppy economics.

Note, all growth rates are rounded to one decimal point. Economist quote two decimal points just to prove they have a sense of humor. 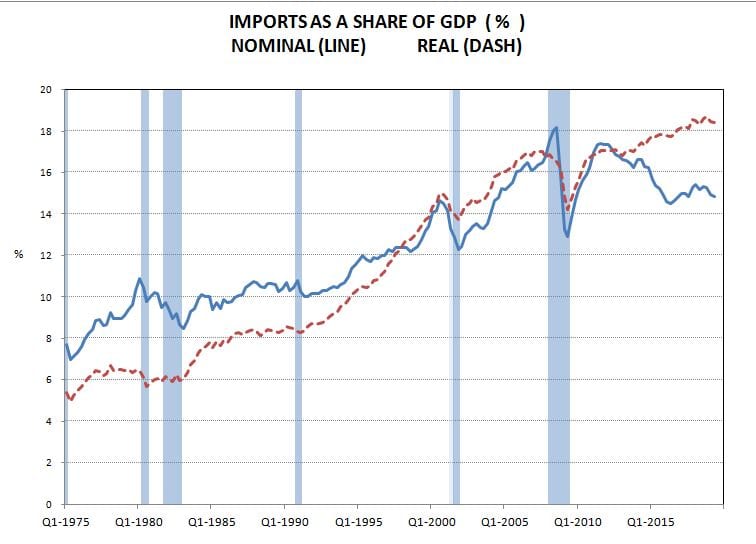 While the yield curve turning negative is getting a lot of attention and seems to be the main excuse for yesterdays stock market drop, there are other financial indicators that are also signaling weaker economic growth ahead.

The primary one is quality spreads as the yield on corporate bonds are rising relative to treasuries.  This is driven by investors fear that in a weak economy, recession environment the risk of corporate defaults rises and bond buyers demand a larger premium to take that larger risk. 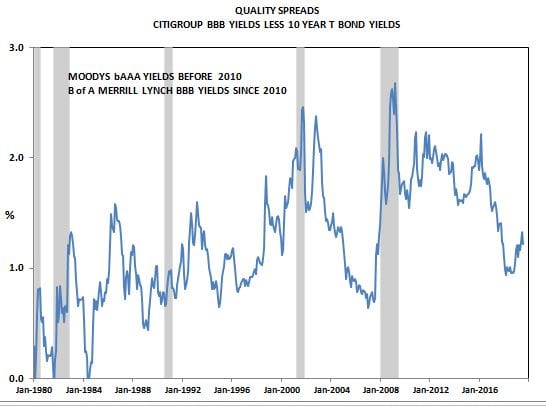 It is easy to see that quality spreads are driven largely by economic weakness by comparing them to capacity utilization. 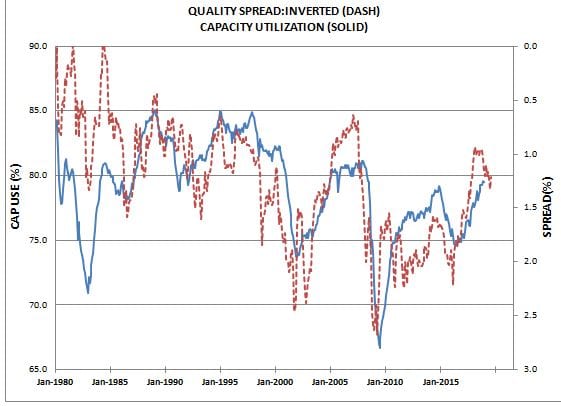 Long Treasuries vs The Long Wave

Since the early 1990s, I published this chart every month on the back cover of my publication until I retired a couple of years ago.  I thought it was a great piece of marketing to remind readers that I was a long run bull on interest rates.

Readers might not pay much attention or remember claims that I was bullish, but they would pay attention to and remember this.  I even had bond managers walk out over this chart in the middle of my presentation.

Now just felt like a good time to publish it again. 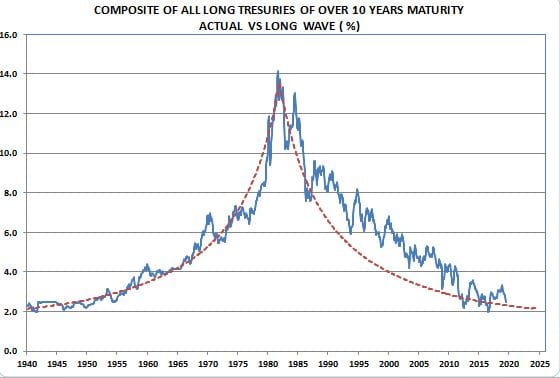 Click on image to enlarge it for better viewing.

Trump should not forget that the Chinese leadership does not have to hold an election in 2020.

I wonder who this gives an advantage in the trade war.

Economy may be weaker than generally recognized

The survey data tends to lead the payroll: 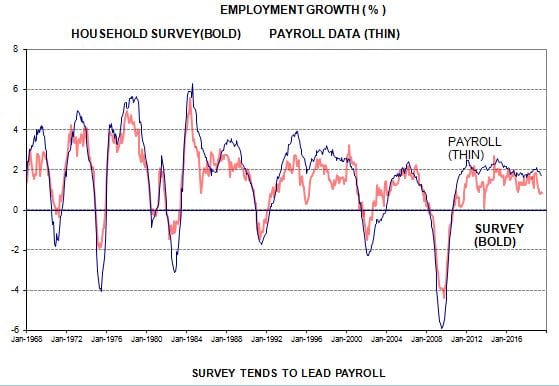 In 2019 payroll employment —  what Wall Street pays attention to –is the weakest since 2012. 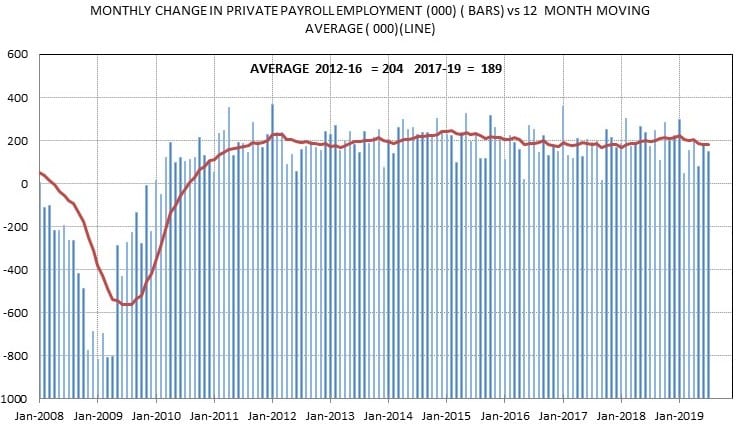 Moreover, hours worked has flattened out:

Under Trump the federal deficit has rebounded to some 4.4 % of GDP  — it is the same whether you look at it quarterly or monthly data as this chart does.  The monthly estimate is calculated by Haver Analytics. So much for the tax cut paying for itself.

The shaded areas are by Presidential term, not of recessions as is usually the case.  Typically, Republicans leave office with a larger deficit than they inherited while Democrats leave with a smaller one, or a surplus. Of course, this is exactly what “starve the beast” calls for. 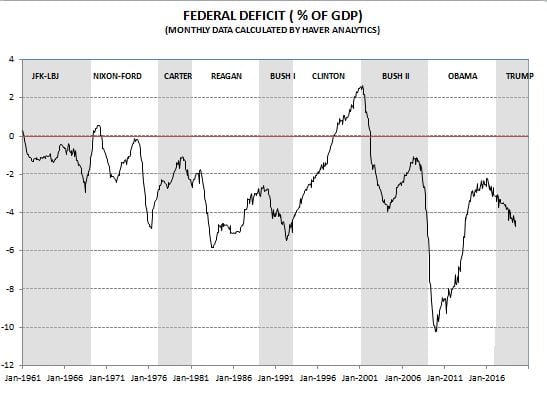