The coincident and short term leading indicators, as expected, continue to be awful — probably the worst since the Great Depression.

Whether this downturn can be turned off relatively quickly, or whether it metasticizes into something far worse and far longer is going to be determined by the wisdom – or lack thereof – of those few people at the very top of the US and State governments. The outcomes might be extremely different if they are determined at State levels.

Abbreviated Coronavirus dashboard for April 23: New York accounts for ALL of the US’s progress

Abbreviated Coronavirus dashboard for April 23: New York accounts for ALL of the US’s progress

No big changes today, and since a picture is worth 1000 words, let me let the graphs speak pretty much for themselves.

1. Daily infections for the US as a whole continue to look like they are trending slightly down (but more on that below): 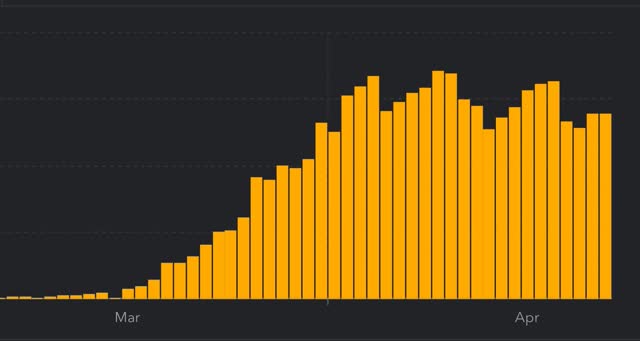 is out.  SS now in “short term actuarial insolvency”  Much (lies) will be made of this.  The Report does not lie,  but it does obscure the fact that a 2% increase in the payroll tax will still solve the problem.  the one tenth percent per year gradual approach will now need to be a little bit higher…  increasing each year we delay, but at the end of the day no higher than the 2%.
The biggest reason for the projected “insolvency” now has nothing to do with SS itself,  but predicted increase in employers shifting pay to non taxable health care benefits.
I may be able to write more about this but not very motivated since no one seems to listen.
Also it is getting harder for me to find the energy and correct the typos.
2% is the cost to workers.  employers pay another 2%.  people who like pointless arguments will argue this is “really” a 4% increase.
doesn’t matter.  the workers will only “see” 2%,  and even a 4% increase is cheap for what it buys.
Read More >

Healthcare
This note was published on April 17, 2020, at NEJM.org.
As a chief physician executive, I rarely get involved in my health system’s supply-chain activities. The Covid-19 pandemic has changed that. Protecting our caregivers is essential so that these talented professionals can safely provide compassionate care to our patients. Yet we continue to be stymied by a lack of personal protective equipment (PPE), and the cavalry does not appear to be coming.
Our supply-chain group has worked around the clock to secure gowns, gloves, face masks, goggles, face shields, and N95 respirators. These employees have adapted to a new normal, exploring every lead, no matter how unusual. Deals, some bizarre and convoluted, and many involving large sums of money, have dissolved at the last minute when we were outbid or outmuscled, sometimes by the federal government. Then we got lucky, but getting the supplies was not easy.
Read More >

Climate Change
(Dan here…I know its long, broad, … but I think it says somethings that need be said.  Another look??)
by reader Ken Melvin

The Anthropocene and Global Warming

of significant human impact on Earth’s geology and ecosystems.

Someday, anthropologists and historians will look again at the possible causes of Global Warming. That it was Anthropogenic has long since been recognized, but let them ask what were some of the worse things humans did to cause Global Warming? What led them to so damage their only home?

For Humans’ first 200,000 years, their impact remained low. World wide Human Population, made up of small groupings of hunter-gatherers, never reached 10 million. The First Agricultural Revolution, occurring around 10,000 B.C. when human population was still below 10 million, brought more land under cultivation; producing more food which supported an increase in population.

As the Human Population continued to grow, humans came to live in villages, then towns, and then cities. More people required more food, more housing, more fuel for heating and cooking, … Ancient Rome, circa 800 B.C., is thought to have had a population of 1 million. A city of that size needed a lot of lumber from trees for houses, wood from trees for cooking and heating, timbers from trees for the ships for trade and war. Over-cutting of adjacent forest caused soil erosion and local Climate Change. A lot of food was needed to feed a population of 1 million. This required the cultivation and grazing of more land; led to the over-cropping and over-grazing of the surrounding lands. Soils were being degraded and eroded, and grasslands were being turned into deserts.

The final dominoes among the coincident indicators fell this past week. In the “real economy,” the impact of the coronavirus pandemic is fully priced in.

As usual, clicking over and reading should not only be informative for you, but tosses me a penny or two for my efforts in bringing you all this content. 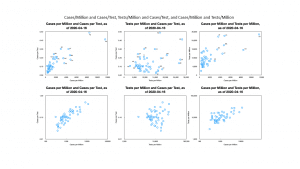 Tests per million are different across states because (a) the states are undertaking testing with different levels of effort and (b) the prevalence of the virus is different in different states.

Confirmed cases per million are different across states because (c) states are testing at different rates and (b) the prevalence of the virus is different in different states.

Cases per test are different across states because (d) some states are not testing much and hence are still picking (relatively, for their state) low hanging fruit and (b) the prevalence of the virus is different in different states.

We have data on confirmed cases and tests across states. How do we use that to get real as opposed to fake estimates of where the virus is in the different states?

And then there is the lag: how do we do the nowcast, taking proper account of acceleration and deceleration in the progress of the disease?

If Georgia were testing at the same rate as New York—30000 per million—how many cases would it be reporting, and what would its confirmed caseload be? Its cases per test is presumably elevated because it is not testing very many people, so simply multiplying by 4.5 is not right. What is right?