The last few weeks oil prices have been moving higher and few analysts seem to understand the full story. If there is any commodity that trades at a one world price it is oil.  So the recent weakness in West Texas Intermediate ( WTI)  is very unusual and stems from temporary bottlenecks.  Over the last few years a new major source of oil has emerged from fracking in North Dakota and other interior locations. The problem was that over the years pipelines and other supply chains for oil had been built to move crude from  coastal ports to interior locations  and refiners like Cushing, Oklahoma, not from the interior to ports. A s a consequence, when mid-western oil supplies expanded it created local surpluses and price weakness.  But now these bottlenecks are being eliminated.  In particular, two pipelines from Cushing to the Gulf Coast have been reversed and large quantities of oil are now flowing from Cushing to the Gulf ports and refiners.  As a consequence the spread between  WTI and Brent crude is  collapsing. Since the June low, Brent crude has risen some 6.5% while WTI has jumped some 15.7%.  This has caused the spread to collapse back to near its old pre-2011 values.  Butt in evaluating the impact of the Egyptian unrest on world oil prices the number to watch is the 6.5% increase in Brent crude, not the 15.7% increase in WTI.  But the impact on domestic gas prices is more complex.  On  the coast gas prices are experiencing small price increase in line with the move in Brent while in the interior gas prices are moving up some 10% to 20% in line with the jump in WTI.

Chart for the day: Growing on Imports

by Rebecca Wilder
Chart for the day: Growing on Imports
Or should I say barely contracting on imports. In the traditional sense, growth in imports does not make a whole lot of sense. Normal economies import and export things, such that statistical agencies subtract the dollar amount of things that are made in other economies but consumed domestically (imports) out of their tally of spending on goods and services (GDP) in order to avoid double counting items. So if I spend $20 on candy at store in some resort town – $9 on taffy made in Monterey, California and $11 on chocolate made in Belgium – the government only counts the $9 candy made in Monterey as part of US GDP.

If imports is the sole positive growth contribution for GDP, that’s tantamount to production falling on goods and services but we don’t want to double-count the drop in spending of imported goods when calculating GDP, so it’s added back.

Yesterday I illustrated the unsustainable accounting growth engine of imports occurring in the euro area (EA). Today I’ll present more of a forward looking analysis on private domestic demand within the euro area: consumption and investment. If current levels of real retail sales hold at the euro area level, then the contributions to growth in Q2 2013 will likely be ever so slightly healthier amid a pickup in private consumption.

Consumption Yesterday we received the May 2013 data on euro area real retail sales, of which the quarterly growth pattern (after revisions, which is very important because this index is heavily revised) has a 70% correlation with euro area real private consumption. A simple bivariate regression predicts that real consumption will grow 0.3% in the second quarter of 2013, holding all else equal and provided the level of real retail sales does not change in June. This would be a material increase from its meager 0.04% contribution to real GDP growth in Q1.

There are many ways to define rebalancing within the euro area: relative prices, trade, productivity, unit labor costs, etc. I’d argue that one could see it in the employment data as well, although it will take a long time to work its way through. Basically, Spaniards should move to Germany and vice versa to enjoy higher income and lower input costs, respectively, when looking for work or planning a business. Well, a lucky 5,000 young Spaniards will get the chance for apprenticeship in Germany thanks to a recent deal between Germany and Spain. But with 770,100 Spaniards aged 15-24 unemployed in Spain, 5,000 German jobs is not going to go very far. So what’s happened to date?

Eurostat released its annual detailed report of the labour force in Europe. I dug around a bit and found some interesting stats. The gist of what I found is the following: employment in the periphery markets has plummeted with no seeming end in site. Notably, 2012 employment levels in Portugal and Greece are 299,000 and 356,000 lower than their respective 2000 levels.

Note: Please click on all charts for a closer look. On its face, the headline increase of a seasonally adjusted 195,000 new jobs reported by the Bureau of Labor Statistics in its June Employment Situation Summary was a respectable monthly increase and better than expected, and with the revisions of April’s payroll jobs from 149,000 to 199,000 and May’s from 175,000 to 195,000, this report represents 265,000 net new jobs compared to last month’s report, adding up to give us the best first half of private job creation since the Clinton administration. However, as we’ll see, the jobs that have been added for the most part aren’t the types that would typically support a decent middle class lifestyle, and almost twice as many new jobs were only part time, strongly suggesting that full time jobs had actually declined in June..

Considering the large revisions, we’d do well to start our look at the establishment survey with a reminder that the 90% confidence interval for this survey is on the order of +/- 90,000 jobs, and that the average change from the initial estimate to the 3rd review has been averaging 46,000, so none of the numbers in this report are cast in concrete.

An Important New Book on Income and Wealth Inequality

I just got an email from LIS (the group that runs the Luxembourg Income Study and Luxembourg Wealth Study) giving notice of a new book:

Contrary to the title, there’s a whole section on wealth inequality.

The book’s 17 chapters by 17 established researchers/research teams all draw on the extensive LIS databases of micro-level income and wealth data from 28 affluent countries 1980–2004. That large-sample, carefully normalized database holds promise of delivering insights that have been unavailable from previous data sets.

Given my interest in inequality and growth in advanced countries, I’ve been watching LIS for a while. I’ve tried working with their data, but it’s so micro-level that a great deal of work would have been required — more than I as an interested amateur was prepared to devote. I’m excited to see what these researchers have done with it.

Unfortunately it’s $65, and I don’t see any indication that the researchers have made their compiled/analyzed data sets (much less spreadsheets/stata files,etc.) available in electronic form for vetting and consideration by the likes of me (and more-competent others). But I’ll probably break down and buy it anyway.

Frances Coppola sums up and expresses a great deal of great thinking in her recent Pieria piece, The wastefulness of automation.

I’d like to highlight one point, one that I’ve been pondering for a long time. There’s one area where machines — until they get sentient — can’t replace people (here from her response in comments):

only humans desire to consume in excess of basic living needs. Show me a robot that wants a Gucci handbag. Or a Shire horse that wants an iPad.

Or…an expert system or drill press that wants a massage. As she concludes the article:

Maybe capitalists DO need a large labour force. Their survival depends on it.

Which leads me, once again, to wonder why I’m not hearing a lot more people discussing Ed Lambert’s work on “effective demand” and its relation to labor’s share of income.

It’s really hard to kill this meme. Note the label on this graph from today’s Free Exchange post: 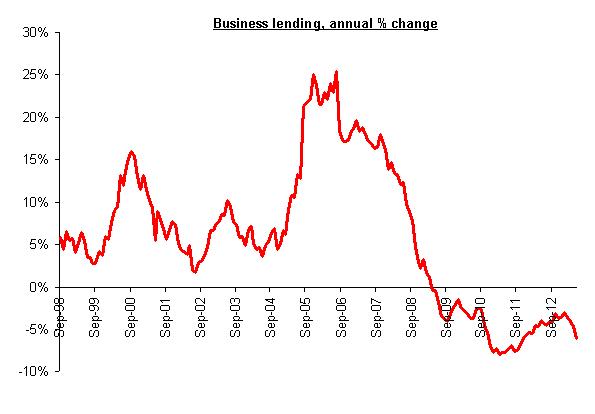 The idea that the problem’s on the supply side is pervasive, and false or at least wildly overblown. Lending rates are at historic lows. But the credit-crunch storyline gives very effective aid and cover to the financial industry in justifying its inordinate size and power.

I tried to drive a stake through the heart of this vampire squid back when we saw that first dive, back in 2009, and the situation is much the same today. (See also Related Posts at the bottom of that post.)

The Sky Is Falling! Business Lending Down 1.2 Percent!