Improvement in initial and continuing claims stalls out

Improvement in initial and continuing claims stalls out

This morning’s jobless claims report shows that the trend of “less worse” news has at least temporarily ended, at a level of about 150,000 higher than the worst weekly levels of the Great Recession.

On a non-seasonally adjusted basis, new jobless claims rose for the second week in a row, by 20,140 to 857,148. After seasonal adjustment (which is far less important than usual at this time), claims were unchanged at 884,000, tied for their “best” reading since the pandemic began. The 4-week moving average declined by 21,750 to a new pandemic low of 970,750:

Working-class Black and Latino Americans, more likely to be paid lower wages, less likely to own significant assets; feel that they are being deprived of a fair share; see this as a consequence of white privilege. Meanwhile, white working-class American’s see themselves as less than privileged, barely hanging on; feel that such demands by Blacks and Latinos amount to a threat to their meager share, their livelihood. Neither group is the other group’s problem, the two groups have a common problem; America’s wealth and income distribution problem.

In a prosperous nation with more than 800 billionaires, no one should have to work for low wages, work multiple jobs, in order to survive. Yet, not enough is coming down to the working class for sharing. Robbing Peter to pay Paul is not the answer. It is because of America’s unfair income distribution that the two groups are being pitted against one another in their struggle to eke out a living. More needs to come down to the working class in toto. Less needs to go up to the already wealthy.

While the Democratic Party seeks to attract the vote of working-class Blacks and Latinos, Republicans have made significant progress in attracting votes from the white working-class; thus splitting, thereby negating, the working-class vote. Choosing sides is not the answer. These are the same group with an artificial distinction being made on the basis of race and ethnicity. There is only one side here – that’s the side of the working class; the side of a majority of Americans.

It’s a slow economic news week, so let me follow up with some further information about movement in the polls. My usual caution: polls are *NOT* forecasts, just nowcasts estimating what would happen if the election were today.

In the past few days, there is further evidence that Trump’s “law and order” message has resonated with at least a small subset of presumably white, probably older, voters. Below are some graphs from Nate Silver’s site of a few swing and swing-ish States. Note his graphs take into account national, as well as State-specific polls, but the net result is typically within 1% of what my average of State-only polling shows.

There has been a considerable narrowing of the race in Florida: 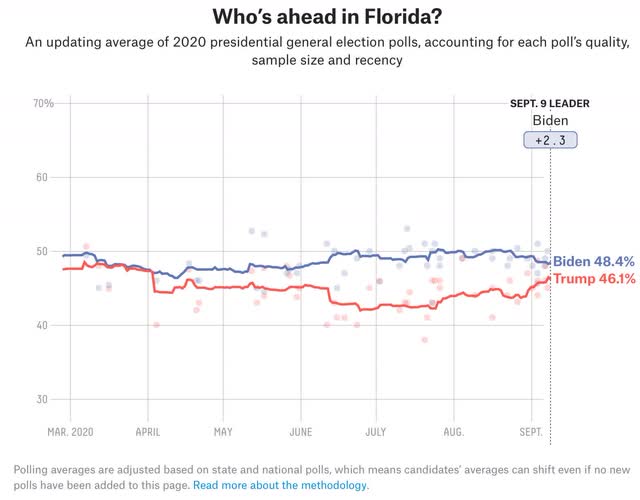 And also, to a bit lesser extent, in Pennsylvania:

A friend sends a picture of the sky at 9:30 AM in San Francisco CA.  The color matches other pictures I have seen. 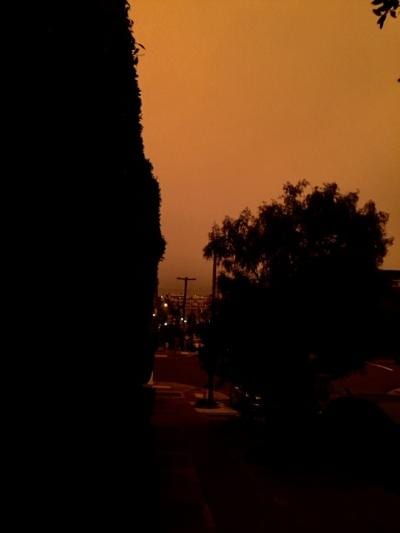 Let’s take a look at the ‘Greatest’ Trump Economy. The first graph shows the BLS Civilian Unemployment rate from 2000 t0 2020. Use the link for a better look Civilian unemployment rate

If you look really close, no you have to look a little closer yet, you can see the Trump effect. 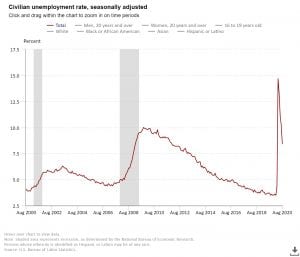 Steve Rattner on the Economy

It appears the FDA is now willing to deviate from its “bedrock mission” of guiding the public with accurate science-based information to a different road emphasizing variable political interests.

“The deep state, or whoever, over at the FDA is making it very difficult  .  .  .   @SteveFDA“, addressing you directly with your Twitter handle (trump).

FDA is endorsing twitter as a mechanism to broadcast actions with and by Commissioner Dr. Hahn. Tweeting:

“I have been criticized for remarks I made Sunday night about the benefits of convalescent plasma. The criticism is entirely justified. What I should have said better is that the data show a relative risk reduction not an absolute risk reduction.” SteveFDA.

It would appear the FDA is now under direction of trump who is taking it down roads not traveled by the FDA in the past with the medical profession in the back seat. Some are not so willing to go along for the ride.

“We cannot entrust the health of 330 million Americans to a person who is subservient to President Trump’s whims, unprecedented promotion of unproven therapies, outrageous lies, and political motivations.” Dr. Eric J. Topol, MD, the editor-in-chief of Medscape

Medscape has three interesting articles critiquing the FDA. The first article reviews the  expansion of remdesivir usage, the second covers FDA Commissioner Dr. Stephen Hahn actions, and the last is questioning the FDA’s Covid decisions.   The first two articles were published on August 31st and the last on September 2nd. Typically, I read the articles and then go on to the comments section to see what medical practitioners have to say. I would suggest you too read the articles and then read the comments which can reveal a different perspective.  The comments can be useful and insightful.

I am afraid I have some bad news for those who think Trump did not have a convention bounce. In the past week, disapproval has eroded by 1.9% and approval has increased by 1.5%. Both of these have moved over 3% from their recent nadirs. I am sorry to tell you that Trump’s attacks on violent protests have been effective, presumably by convincing some Whites who were previously on the fence that “the animals” are loose and have to be brought to heel: 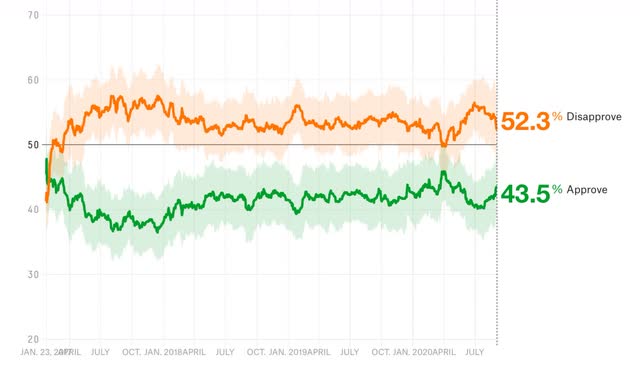 This is probably why Biden had a press conference in which he unreservedly condemned the violence, and Trump has continued to attack anyway.