As usual, the first data for last month starts out with the ISM manufacturing report. This index, especially its new orders subindex, is an important short leading indicator for the production sector.

In January the index declined from 58.8 to 57.6, as did the more leading new orders subindex, which declined from 61.0 to 57.9 (note the breakeven point between expansion and contraction is 50): 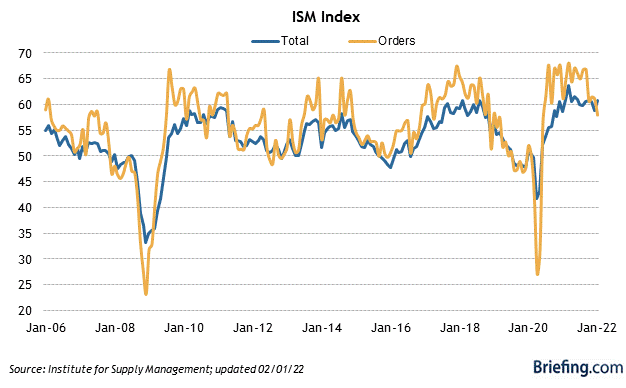 Both the total index and the new orders subindex ran extremely hot throughout 2021, typically with readings over 60. In the past several months these have cooled a little bit, but are still very positive. This continues to forecast a strong production side of the economy through mid year 2022, if not so ‘red hot’ as before.

The second release that typically begins the month, construction spending for two months ago (December), rose 0.2% in nominal terms for overall spending including all types of construction, while spending on the leading residential sector rose 1.1%. Nominally, both made new all-time highs:

While total construction spending declined by more than it had before the Great Recession, the decline in residential construction spending, while increasingly substantial, remains nowhere near the big decline it suffered before the end of 2007, in this series that only dates from 1993. Comparing it with single family permits (gold), and housing starts (violet) below:

This confirms that residential construction spending is not yet a recession level decline. This is important, since as my long-term forecast yesterday indicated, housing is an important such indicator, and as of now is one of the negative inputs.