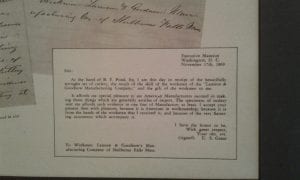 Of all the things being deconstructed regarding the debate last night, this is the one that stood out for me:

QUESTION: The outsourcing of American jobs overseas has taken a toll on our economy. What plans do you have to put back and keep jobs here in the United States?
Romney:…which will allow me as president to be able to put in place, if necessary, tariffs where I believe that they are taking unfair advantage of our manufacturers.

So, who is it on Romney’s team that has decided this is a viable tool regarding the position labor is in? Is this what would be expected of a Republican presidential candidate? It just floored me to hear Romney speak the word “tariff” when presenting his solution to the question.  What would Uncle Milton think of his school’s chosen one?
Read More >

Larry Summers, who is very very good at provoking debate, said
“It may be desirable to have a given amount of work shared among more people. But that’s not as desirable as expanding the total amount of work.”

True. But we are not, in fact, expanding the total amount of work — and Congress doesn’t seem willing to spend enough on stimulus to change that unfortunate fact. So shouldn’t we be considering other measures, if only as a stopgap?”

Please click the link and read Krugman’s op-ed if you haven’t already. It is excellent but limited to 700 words. Unlimited reflections on the topic after the jump.

Second, Krugman suggests that US unemployment is not just high, but much higher than it need be given the large recession and small stimulus. Note that the evidence he presents is the change in employment and unemployment in the US and Germany. One might suspect that this amounts to the US unemployment rate rising to a level similar to the German unemployment rate – that in effect Krugman is proposing that we don’t accept unemployment that suddenly rises to around 10% in a recession but rather insist on such levels all the time.

So how did they do it and should we do what they did?

First all Euro area countries have strong restrictions on layoffs. At least two Italy and Spain have decided not to apply the restrictions to many newly hired workers starting, in the case of Spain, almost 30 years ago. The Spanish increase in unemployment is even huger than the US increase.

The effect of employment protection legislation is a confounding factor not relevant to the US policy debate and a major part of the explanation of the especially bad experiences of the US, Spain and Ireland.

Second job sharing. Germans have been doing this for decades. The idea is that there is a fixed number of hours of work demanded and it is better if everyone works part time than if some are unemployed. This reasoning is like a red flag to a bull to almost all economists certainly including Larry Summers (and including Paul Krugman in the past). Krugman considers it a third best approach imposed by political limitations. I’d note that the simplest way to do this would be to make the payroll tax progressive so that less has to be paid by firms and workers if there are more workers each of whom is paid less . Also a progressive payroll tax implies increased revenues in the future even if marginal rates are a function of real wages (so inflation doesn’t cause bracket creep).

In one of my favorite papers of all time MacDonald and Solow argue that employment will be increased by a progressive payroll tax for fixed revenues (zero in their model). They consider a unionized firm (the paper is very old) but evidence on wages suggests that similar things happen without formal unions. The point is that it doesn’t really matter why a firm is spending the same money to pay 3 people a lot or 4 people a little. Whether the 3 are paid a lot because they work longer hours or because they have higher hourly wages, hiring them is still 3 jobs for the price of 4.

I don’t see any value added from applying the benefit only in cases in which one can document the splitting of a set of tasks to share jobs. This would be complicated and I don’t think there is anything especially desirable about that.

Note a historical example, the Clinton tax increase of 1993. Not all taxes were increased as the bill also expanded the Earned Income Tax Credit. Taxes were higher on average and much more progressive. The tax changes were followed not only by a huge increase in employment but also a downward shift of the Phillips curve. Theory and evidence correspond in this case. Also the proposal is wildly popular according to dozens of polls.

OK aside from that Krugman mentions hiring subsidies. Now most such subsidies would go to employers who would have hired without a subsidy. One would expect much of that money to go to the workers who would have been hired anyway (how much depends on assumptions about labor markets and/or bargaining). So ? It’s an excuse to pump more money into the economy which would be good policy.

Also such subsidies have been shown to affect employment. In particular a deadline to get the subsidy (only paid if one hires before oh say November 2 2010 just to pick a date) would have a large effect on the speed of the increase in employment. Following Greg Mankiw, I’d add it on to cap and trade as part of where the revenues go. As noted by Mankiw, this is also an excuse to start subsidizing before CO2 permits are actually sold as it takes time to set up a cap and trade system.

So I propose the Greg Mankiw/soak the rich plan to help US employment.

The New York Times carries a story that is actually probably of more import than Fed announcement of not renewing the Treasury Bond program.

Wednesday’s ruling goes to the heart of one of the biggest trade issues pending between China and the West: whether intellectual property, like copyrighted songs, books and movies, should be granted the same kind of protection from discriminatory trade practices as manufactured goods.

In its petition to the W.T.O., the United States particularly criticized China’s requirement that most copyrighted material be imported through a few government-designated companies, which tend to be wholly owned or majority-owned by the government.

The panel condemned this, saying in its report that “it also appears that foreign individuals and enterprises, including those not invested or registered in China, are accorded treatment less favorable than that accorded to enterprises in China with respect to the right to trade.”

China in particular has been an enthusiastic supporter of the W.T.O. since its admittance in 2001, because the group’s free-trade rules have made it hard for other countries to impose antidumping and antisubsidy limits on Chinese exports. But the Chinese government has not removed heavy taxes on imported auto parts that were condemned by another W.T.O. panel in July 2008.

Economic planners in Beijing have ordered government agencies not to buy imported goods for the country’s nearly $600 billion stimulus program except when no domestically produced goods are available. The government has set high domestic content requirements for the wind and solar power industries, and has rejected bids even by multinationals that erected factories in China to supply the local market.

The panel stopped short of endorsing an American requests for a ruling on whether Chinese censorship had unfairly restricted imports. The panel said that this question was outside its purview; for the same reason, the panel also declined to rule on whether China’s approval processes were too onerous for would-be distributors of imported entertainment.

Another example of a trade issue is noted that is recurring as well:

As the International Trade Commission considers comments on its recommendation to impose tariffs on Chinese tire imports, President Obama stands at a crossroads in the fight to rebuild the American economy.

President Obama has made a commitment in the past to uphold previously signed trade agreements. China, however, is violating these agreements by flooding the market with a massive 300 percent increase in tire imports in an attempt to wipe out American tire manufacturers. In 2004, China sent 14 million tires to the U.S. valued at $453 million. By last year, that had increased to 46 million tires valued at $1.7 billion.

This affects Canada as well, since many tires are made up north. Is the climate different enough from ‘no tariffs’ days to make for a different response? How does a trade policy respond to deal with these issues as we make adjustments in people’s livelihoods? What are the rules of this market situation?