Lebanon’s Leaders Resign over deaths of 200, but Trump refuses Accountability for 163,462 Deaths

Prof. Juan Cole, the Richard P. Mitchell Professor of History at the University of Michigan, Ann Arbor is also the founder of the blog Informed Comment. Professor Cole writes on international issues. Angry Bear has featured Prof. Cole from time to time.

Ann Arbor (Informed Comment) – On Monday, the prime minister of Lebanon and his entire cabinet resigned en masse, reports Bassem Mroue at the Associated Press. Last week an enormous explosion destroyed Beirut’s port and part of the city, killing over 200 persons and wounding thousands, and leaving 300,000 homeless. The explosion came about after volatile ammonium nitrate was stored at the port carelessly for seven years, despite expert warnings that it could flatten the city. Government corruption and neglect were at the root of the tragedy.

Hassan Diab, a former engineering professor at the American University in Beirut and former minister of education, became prime minister in December after massive protests ousted his predecessor, Saad Hariri. By custom, the prime minister in Lebanon is a Sunni Muslim, but Diab joined a government dominated by the Shiite Hezbollah and its allies. He is a technocrat rather than an old-time sectarian, machine politician, as were most of his cabinet ministers, and became prime minister because he was the sort of leader the crowds seemed to be demanding.

When he resigned, he said of the old political class of warlords and elite sectarian families, “They should have been ashamed of themselves because their corruption is what has led to this disaster that had been hidden for seven years. I have discovered that corruption is bigger than the state and that the state is paralyzed by this clique and cannot confront it or get rid of it.”

Diab had hoped to stay on for two months to arrange for new elections and a smooth transition, but three of his ministers resigned this weekend after demonstrators massed in downtown Beirut and briefly took over government buildings, declaring one of them the “HQ of the Revolution,” and he saw the writing on the wall.

Still, while president Michel Aoun accepted Diab’s resignation, he would ask him to stay on in a caretaker role. Protesters remain in the streets and are demanding new elections under a new electoral law. It is not clear how a new electoral law would be crafted in the absence of a government, nor is it clear that parties such as Hezbollah would allow significant changes in the rules of the game.

Juan Cole at Informed Comment has a post up by Will de Freitas Should we cover the Sahara Desert with Solar Panels to Fight Climate Disaster?

A map of North Africa is shown, with a surprisingly small box somewhere in Libya or Algeria shaded in. An area of the Sahara this size, the caption will say, could power the entire world through solar energy. 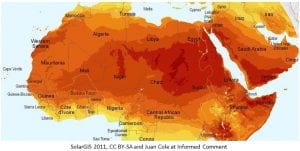 Over the years various different schemes have been proposed for making this idea a reality. Though a company called Desertec caused a splash with some bold ideas a decade ago, it collapsed in 2014 and none of the other proposals to export serious amounts of electricity from the Sahara to Europe and beyond are anywhere close to being realized.

An engineer at Nottingham Trent University has researched various options for Saharan solar, Amin Al-Habaibeh and discusses the sheer size of the Sahara desert and amount of sunshine it receives:

– It’s larger than Brazil, and slightly smaller than the US.

– If every ray of sunshine hitting s the Sahara was converted into energy, the desert would produce enough electricity over any given period to power Europe 7,000 times over.

So even a small chunk of the desert could indeed power much of the world, in theory. But how would this be achieved?

According to Amin Al-Habaibeh, there are two main technologies which can be applied to this project and each has their pros and cons:

– Concentrated solar power using lenses or mirrors to focus the sun’s energy in one spot, which becomes incredibly hot. This heat then generates electricity through a steam turbine.

– A tower in the middle of the mirror or lens is the “receiver” which then feeds heat to a generator.

– Some systems store the heat in the form of molten salt. This means they can release energy overnight, when the sun isn’t shining, providing a 24 hour per day supply of electricity.

– Concentrated solar power is very efficient in hot, dry environments, but the steam generators use large amounts of water.

– There are also the regular photovoltaic solar panels which are much more flexible and easier to set up, but less efficient in the very hottest weather.

Amin Al-Habaibeh: “Just a small portion of the Sahara could produce as much energy as the entire continent of Africa does at present. As solar technology improves, things will only get cheaper and more efficient. The Sahara may be inhospitable for most plants and animals, but it could bring sustainable energy to life across North Africa – and beyond.”

The issue may be in how to transmit the energy to other areas? Is it still transmission via immense cables?

The longer we delay, wait, deny, and ignore the issues we produced for climate; the more drastic the action to be taken. There is more to the discussion on producing power from the sun in the desert and worth exploring. In Juan Cole’s post: Should we cover the Sahara Desert with Solar Panels to Fight Climate Disaster? there are other sites identified in which to do similar installations.

13 gigawatts of New Wind power in US in 2012, Renewables Half of all New Energy

13 gigawatts of New Wind power in US in 2012, Renewables Half of all New Energy

Juan Cole at Informed Comment writes on Wind generated electricity and how it is quickly becoming a major source (updated 1/27…dan):

The US put in 13 gigawatts of new wind energy capacity in 2012, 5 of it in December alone, according to a Bloomberg study. The Office of Energy Projects report was a bit more conservative, but confirmed the general trend.

Wind alone now accounts for 6% of US electricity generation!
Even the government figures showed that about half of all new energy generation in the US came from renewables in 2012, mostly wind turbines.
The US also put in about 1.5 gigawatts of new solar power last year.

In some markets, such as Texas, installing wind turbines for electricity generation is now actually cheaper than building natural gas plants! Reflecting this trend toward wind grid parity, more new wind capacity was added to the US electrical grid than natural gas, which was itself no mean shakes. Gas puts out less carbon dioxide than coal, but fracturing it from underground rock formations may release so much methane (a very potent greenhouse gas) that it is a wash with coal. Both coal and gas plants need to be mothballed as quickly as possible.

The bad news is that the US still generated 5 billion metric tons of carbon dioxide in 2012, the highest per capita in the OECD nations! We are poisoning the world and provoking catastrophic climate change, and all the good news about wind and solar doesn’t offset our massive contribution to looming environmental disaster.

Specially bad news is that 1.4 gigawatts of new, dirty coal power was brought online in 2012 in the US. That should be illegal! Coal is poisoning us and our world! Carbon dioxide in the quantities we are producing it is a toxin for the world. Not to mention that we are being mercury-poisoned by dirty coal emissions!

If you care about your children, call your state representative (look him or her up) and demand that building new coal plants be made illegal. Now! We don’t need it. Put in wind and solar instead. In many markets it wouldn’t even be more expensive, and if you count in the cost of nerve poisoning by mercury and loss of seaside real estate, wind is dirt cheap compared to coal!

Likewise, call your city council representative and demand that your city generate its own electricity with wind and solar, taking it off the coal grid (this is especially important in the Midwest, where typically 65 percent of electricity generation comes from coal). And if you can afford it, put solar panels on your roof. You can cut your electricity bill 20-40% even in the Midwest. And invest in crowdsourcing solar projects (Warren Buffett is investing in solar, why shouldn’t we?)

We can do this from the bottom up. We can’t wait for the backward Neanderthal tea partiers in our Congress, who practically eat lumps of coal for lunch and wash it down with a petroleum martini. There isn’t much time to bring the carbon down, America. 2020 is a deadline, and it is only 7 years off. Goals of being 20% green by 2020 won’t do it. We need a major national movement and transformation, on the scale of the Civil Rights movement. Because clean energy and a non-warming world are a basic civil and human right that we deserve and will only get it if we demand it.