The Pro and the Con of Obamacare

I’ve been trying to learn a bit more about PPACA (aka, Obamacare) and its effects. It hasn’t been something that has interested me a great deal until the last week or so, so I am approaching this from a position of ignorance. But I have been reading through as much material as I can find.

Basically, I think the biggest factor in favor of PPACA is the big reduction in the number of uninsured. 14.7% of Americans were uninsured in 2008, the last year before Mr. Obama became President. As shown in the graph below, by 2016, that figure had dropped to 9%. (All figures from table 1.1.b in this CDC report.) 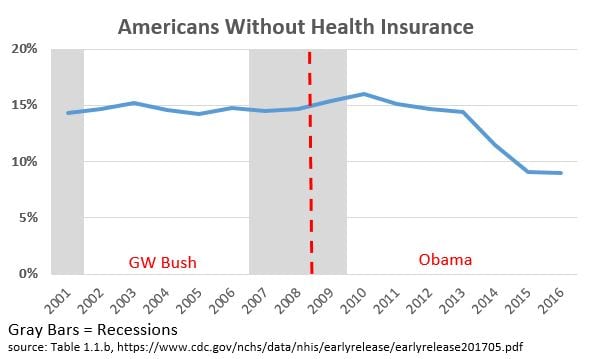 The biggest factor against PPACA is its cost. According to the Department of Health and Human Services:

As a backdrop to all of this, two additional things are worth noting. The US was already an outlier when it came to healthcare spending as a share of GDP even before the Obamacare provisions kicked in. That despite the fact that many countries that spend a lot less than we do already had something like universal coverage by then.

And speaking of universal coverage and costs, Mr. Obama, in his speech accepting the Democratic nomination for President of the United States in 2008, said this:

Now is the time to finally keep the promise of affordable, accessible health care for every single American. If you have health care, my plan will lower your premiums.

Of course, this didn’t quite happen… more Americans have access to health care, though there are still over 28 million uninsured. And of course, for quite a few (just about all?) of us, this promise of lowered premiums hasn’t happened. Quite the opposite, in fact.

So what is the end state? Why does the system we have fail so many people? How can we make it better?

Update…  The graph at the bottom of this article from the Washington Post is quite informative.