As usual, we started out the month with the forward-looking ISM manufacturing report for September, as well as construction spending for August.

Let’s take the ISM report first since it is an important short-leading indicator for the production sector. And here, the news was good, as the overall index improved to 61.1, among its highest numbers in several decades (but not quite as high as several readings earlier this year). The more leading new orders subindex held steady at a white-hot 66.7: 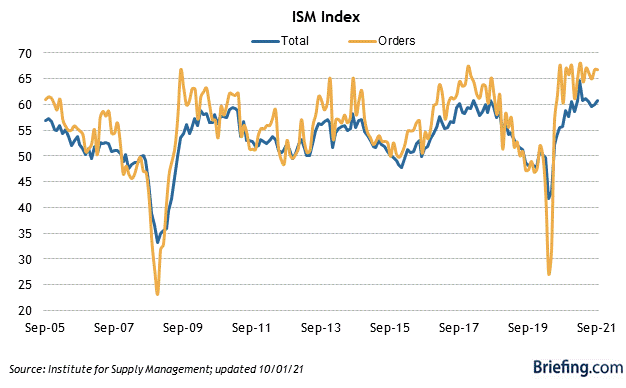 There is not a hint of a manufacturing slowdown in this number, despite the well-documented problems in the supply chain.

Turning to construction, overall spending including all types of construction was unchanged, while spending on the leading residential sector increased 0.4% at or making new all-time highs:

In absolute terms, “real” construction spending declined sharply earlier this year, but now appears to have bottomed out:

So the leading aspects of both reports were positive, although price issues in construction materials remain problematic.