An Idea Whose Time Has Come: Make Election Mail Free 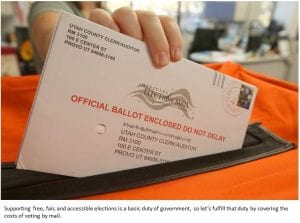 Mark Jamison’s commentary on USPO matters have been featured at Angry Bear Blog a number of times over the years. A retired postmaster, Mark Jamison serves as an advisor, resident guru, and a regular contributor to Save the Post Office. Mark’s previous posts concerning the USPO can be found here at “Save The Post Office” or by doing the search function at Angry Bear.  Mark can also be contacted on USPO matters markijamison01@gmail.com

A common thread that runs throughout the history of the United States is the expansion of the franchise.

Early in our history the right to vote was limited to white males, often with strict property qualifications. By the time of Andrew Jackson, the franchise had extended to white males generally. While the primary reason for the Civil War was the elimination of slavery, the logical conclusion of that conflict was the Fifteenth Amendment, which prohibited denial of the franchise based on “race, color, or previous condition of servitude.” The Nineteenth Amendment extended the franchise to women, and the Snyder Act of 1924 extended the vote to Native Americans by granting them full citizenship rights. The Twenty-sixth Amendment extended the voting age to eighteen-year-olds, acknowledging that if one was old enough to fight and die for their country they were old enough to exercise the franchise.

The fundamental premise of our Constitution is that sovereignty lies within the entity known as We the People. Voting, the exercise of our basic right to choose our leaders, should be our most cherished right because it enshrines voice and participation granting the dignity of self-government.

And yet for all its acknowledged value and importance there have still been reactionary and revanchist powers that sought to limit and confine the franchise. The powerful and elite rarely willingly share their wealth and power.  Each step in extending the franchise was met with resistance.

Ninety-five years after passage of the Fifteenth Amendment, the 1965 Voting Rights Act finally enshrined mechanisms to fulfill the vision of participation that is the cornerstone of American Democracy. The VRA was renewed by Congress several times, most recently in 2006 when it passed in the House by a vote of 390 – 33 and in the Senate unanimously. And yet elements, small recalcitrant elements of our society, still begrudge this most fundamental and basic of rights. In an infamous decision that stands with Dred Scott as among the most unjust acts of the Supreme Court the 2013 Shelby County v. Holder decision eviscerated key parts of the VRA. Predictably the same bad actors who have fought voting rights took the opportunity to find new and effective ways to suppress voting, especially among minority communities.

Now we have a president who, fearing he will lose an honest and fair election, takes every opportunity to call into question the integrity of our elections and voting practices. While we struggle as a nation with a deadly pandemic, this president has done everything in his power to call into question an obvious solution that will make voting safer, easier, and more accessible. That solution is voting by mail.

Several states already vote exclusively by mail and every state has some provision for mail voting even if limited to excuse-required absentee ballots. In this time of pandemic, voting by mail makes sense and we should make every effort to assist states in providing vote by mail.