Doctor, Who Was Paid by Purdue to Push Opioids, Will Testify Against Drugmaker

Just this morning I read this article by The Guardian;

“In a newly released statement to an Ohio court hearing a combined lawsuit of more than 1,600 cases, Doctor Portenoy accuses drugmakers of underplaying the dangers of opioids and of pushing them on patients who did not need them. The doctor said the industry overstated the benefits of narcotics painkillers and ‘understated the risks of opioids, particularly the risk of abuse, addiction and overdose’”.

Apparently Doctor Portenoy was the hired gun for Purdue Pharma and others to promote the use of Opioids. Dr. Portenoy “did a study of only 38 patients and the results were mixed with more than one-third failing to benefit from the drugs. It also lacked the standard scientific rigor of control groups.

But the paper had a significant impact and tapped into a frustration among a group of younger pain doctors at their inability to offer anything more than superficial relief to patients whose lives were dominated by debilitating pain.”

Even though Portenoy’s study lacked the numbers that the Jick and Porter study had in their study, I am sure it had a tremendous impact on subsequent sales. It was a more recent study than the 1980 letter detailing the impact of Opioids in a hospital setting.

In the text of my post on April 7th;

In 1996 with the introduction of OxyContin by Purdue Pharma, the use and abuse of the letter almost tripled. If we go back to the charts again, we can see that upon introduction of OxyContin in 1996 a year or so later the death rate per 100,000 doubles and continues to increase yearly. “The aggressive sales pitch led to a spike in prescriptions for OxyContin of which many were for things not requiring a strong painkiller. In 1998, an OxyContin marketing video called ‘I got My life Back,’ targeted doctors. In the promotional, a doctor explains opioid painkillers such as OxyContin as being the best pain medicine available, have few if any side effects, and less than 1% of people using them become addicted.” Increases in drug poisoning deaths involving prescription Opioids increases with 37% of all drug-poisoning deaths in 2013 being attributed to Opioids a 4-fold increase from 1999.

In the 2017 letter to the NEJM, The Jick and Porter Letter is cited in the Supplemental Appendix. The bibliometric analysis of the increased numbers of citations of this letter aligns with the introduction of OxyContin in 1995/96.

“the authors of 439 (72.2%) cited it as evidence that addiction was rare in patients treated with opioids. Of the 608 articles, the authors of 491 articles (80.8%) did not note that the patients who were described in the letter were hospitalized at the time they received the prescription”

The increased numbers of deaths due to Opioid use, as shown in the Joint Commission charts, occurred shortly after the introduction of Oxycontin.

The Guardian article affirms what many of us have been thinking over the last couple of years.

There a pretty detailed discussion of the impact of pharmaceutical companies on the use of Opioids at Naked Capitalism as written by Yves Smith; New York Sues Big Pharma for Opioid Crisis Bill Black, Marc Steiner, Letita James, discuss the study and how Purdue and other Pharma companies influenced the market.

In 1980, the Porter and Jick letter to the editor of the New England Journal of Medicine by the Boston Collaborative Drug Surveillance Program stated:

“the risk of addiction was low when opioids such as oxycodone were prescribed for chronic pain.”

It was a brief statement by the doctors conducting the study, taken out of context, and cited many times afterwards as justification for the use of oxycodone. 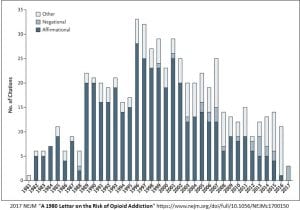 Citations of the 1980 standalone letter on “addiction being rare” from the use of opioids such as oxycodone failed to mention, the patients administered to were in a hospital setting as noted in the Porter and Jick letter. Overlooked, a mistake, intentional misquote by the people citing this letter?

In 2007 in the pharmaceutical industry, “the manufacturer of OxyContin and three senior executives of Purdue Pharma plead guilty to federal criminal charges that they misled regulators, doctors, and patients about the risk of addiction associated with OxyContin.”

This year, law makers questioned Miami-Luken and H.D. Smith wanting to know why millions of hydrocodone and oxycodone pills were sent (2006 to 2016) to five pharmacies in four tiny West Virginia towns having a total population of about 22,000. Ten million pills were shipped to two small pharmacies in Williamson, West Virginia. The number of deaths increased along with the company and wholesaler profits.

60% of all drug-poisoning deaths in 2013 involved prescription opioids and/or heroin. Among individuals aged 25 to 64 years, deaths from a drug overdose—the majority of which were opioid-related—exceeded motor vehicle collisions as the leading cause of accidental death in 2013. Four in five new heroin users started out misusing prescription painkillers.

The information is out there as to why the abuse of opioids and related drugs is increasing. It is being ignored or argued against as limiting a patients rights to have unhindered access to opioids by doctors and patients alike. Sound familiar, similar to the gun lobby?

AMA Delegates Back Physician Freedom in Opioid Prescribing At best, 20% of all doctors are members and the percentage has been declining. From the meeting; “The CDC’s guidelines on the use of opioids for pain management are well-intentioned, but some insurers and pharmacists have used them to restrict providing and need to be discouraged from doing so, members of the American Medical Association (AMA) House of Delegates said Tuesday.”

And the CDC response as told by one doctor. “a member of a pain management task force being convened by the Department of Health and Human Services. “Draft comments will be coming out in a couple of weeks and will very specifically address the misinterpretation of the CDC guidelines,” he noted. “This is really timely because the comments from the AMA will be extremely important in weighing in [on the issue].”

Doctors do no want interference with decision- making when it comes to patients. At the same time, little has been done to rein in addiction due to prescription opioids which lead to other addictions because prescriptions are expensive or are limited in access. Here is Janet from stopnow blog and who writes about addicted babies due to mothers taking opioids:

More overdose deaths last year than the entire Viet Nam War. The FDA approves sufentanyl 10 times stronger than fentanyl. Yesterday the AMA President was quoted using the same verbiage as Big PhRMA- undertreatment of pain. And now a campaign to undo the CDC guidelines which until they were released doctor education was coming from the drug companies. We need full disclosure – is this funded by Big PhRMA.

Here is a counter argument from a pharmacist where he misapplies the stats to suit his argument:

“it depends what numbers of overdose deaths you are referring to because it is certainly not more deaths due to opioid pain medications. There were 72,000 overdose deaths which includes ALL overdoses from ALL classes of medications. Overdoses from opioids were 49,000 and within that group only 19,354 were from opioid pain relievers. Deaths from fentanyl (illicit) totaled over 29,000, heroin almost 16,000, and cocaine 14,500. (One death could be counted in more than one category, numbers from NIH.) Vietnam war deaths totaled 58,220 versus 19,354 deaths from opioid pain medications. By the way, there were 10,684 deaths due to benzodiazepines, should the CDC mandate doses and days of therapy for those also?

I have no connections with or any payments/gifts from any drug manufacturer. My only concern is that in the national noise of the ‘opioid epidemic’ the focus is on those who abuse opioids and I want to make sure that we still hear the cry of the patient who needs pain relief and who does NOT abuse the medications.”

Yes the pharmacist is correct when he says of the 72,000 deaths only 19,354 can be attributed to opioid pain relievers in 2018. Janet cited the 20 years of Vietnam deaths. The pharmacist conveniently sidesteps the time periods involved here. In three years and if the numbers stay the same (they have been increasing YOY), the numbers of opioid deaths will be slightly less than 20 years of Vietnam if it were to remain at 19,000/year. Four in five new heroin users started out misusing prescription painkillers. Of recently cited 150,000 accidental deaths, 72,000 (a record high) can be attributed to drug overdose deaths, a record high.

And this is ok?

“60% of opioid deaths occur in those who were given a prescription by a physician. The other 40% of deaths are caused by people who obtained opioids by “doctor shopping,” and receive multiple scripts at once. The perceived safety and easy accessibility of these drugs have presented the highest risk for most users, even if they eventually seek out illicit opioids or “street drugs.” In 2014, only 22.1% of non-medical users obtained opioids through a doctor, meaning that the diversion rate of these drugs is very concerning. Many people are getting these medications illegally or without doctor supervision.”

Here’s is a PBS commentary by law professor Ekow Yankah:

That Kroger, the Midwestern grocery chain, has decided to make the heroin overdose drug naloxone available without a prescription is a sign of how ominous the current epidemic has grown.
Faced with a rising wave of addiction, misery, crime and death, our nation has linked arms to save souls. Senators and CEOs, Midwestern pharmacies and even tough-on-crime Republican presidential candidates now speak with moving compassion about the real people crippled by addiction.