Here’s a graph from the UN’s 2017 International Migration : 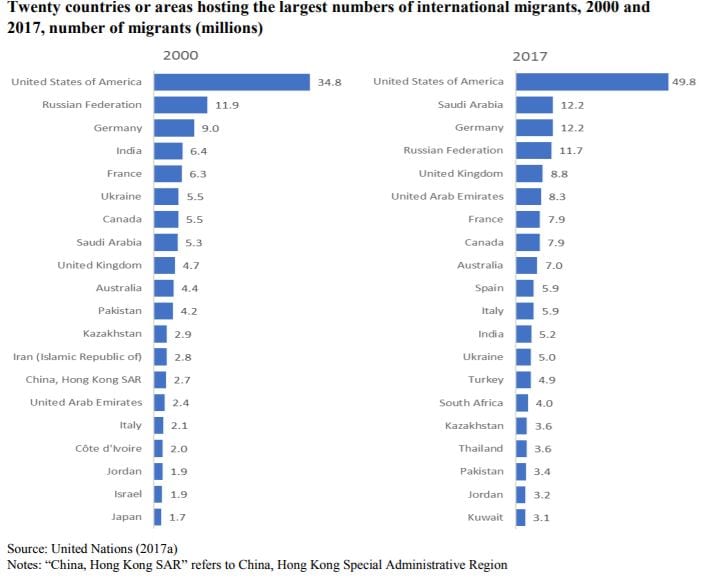 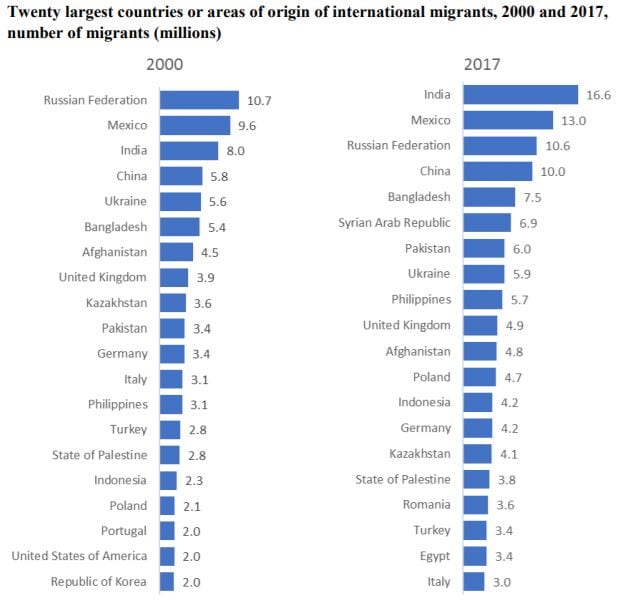 In the last few months I have gotten accused of racism a few times at this blog. I don’t think I am misrepresenting my accusers by stating that their claim is based primarily because of my views on a) immigration and b) the differences between the economic performance of different countries. The two issues actually collapse into one. I have stated repeatedly that I believe that culture is a key factor affecting the difference in economic outcomes (and many social outcomes) between countries. Furthermore, I have stated that people carry culture with them when they move, so a wise immigration policy would select immigrants whose culture is both compatible and likely to generate positive economic results and limited friction.

I claim no credit for these ideas, mind you. Outside of some quarters, the idea that culture is a driver economic growth is widespread, long standing, well established and supported by data. I find it stunning that anyone would question the importance of culture in driving growth and the assimilation of immigrants.

But it is important to always be willing to question one’s beliefs, so I am going to do that here and now. So… how would we show that culture is not a determinant in how well a country does? I can think of a few possible tests but I want to avoid data at this time and just talk it through.

If we do that, we could start by defining “countries that do well.” In general, these would be countries that are stable, pleasant to live in, and relatively wealthy. Over the past few decades, if someone were to make a list of such countries, it would probably look more or like this (in no particular order): the US, Canada, Northwest Europe, Switzerland, Scandinavia, Australia, New Zealand, Japan, South Korea, Singapore and, until China began applying a heavier thumb, Hong Kong. Those also happen to be the countries that would attract the most foreigners interested in being citizens, so this quick and dirty list should pass a basic smell test. (If some of these nations don’t have much of an immigrant population and don’t rank on high on the destination of potential immigrants, it is because they are very selective about the who they let in as opposed to being shunned by would be immigrants.)

So what do these places have in common? It isn’t natural resources. Just ask the Japanese. (Plus, in countries outside of the list above, being blessed by nature somehow correlates with suffering from the “Resource Curse.”) It isn’t Democracy as we know it. That’s a relatively new thing for South Korea, Hong Kong was ruled by foreigners for most of the last century, and then, of course, there’s Singapore. It isn’t coming into the post-WW2 period wealthy; quite a few countries on the list were in miserable shape in 1945. It isn’t a matter of exploiting other countries (which Americans of a certain bent are always fond of claiming is the US’ secret) – South Koreans will proudly tell you that the country has never invaded anyone in well over 2,000 years. Switzerland, too, is proudly neutral. The Scandinavians have also been pretty pacifist for well over a century as well. Small government? As much as libertarians like to claim Singapore for their own, ignoring the massive government participation in the economy (think Temasek, Singapore Airlines, Mediacorp, Singtel, Singapore Power, etc.). Nor did Japan, Inc. qualify. Something about about geography and environmental factors that these countries have in common? Nope and nope.

To be blunt, there doesn’t seem to be a factor or group of factors that can be applied to these countries but not to countries that are “developing.” I also hesitate to go with supernatural explanations, particularly since, as I learned about four decads ago (long before the stupid movie was made), Deus é Brasileiro. Besides, there is no such thing as empirical theology. For completeness, I should also say the Guns, Germs and Steel explanation got a few things right about the past. However, unless I missed something, Papua New Guinea is not is not putting out the performance you’d expect from the world’s smartest people in the Internet Age, which should go some way toward invalidating Diamond’s hypothesis.

On the other hand, I can describe a few cultural factors that distinguish these countries from others. For instance, these countries have (or had) reputations of being the home of people who were, on average, diligent, frugal, studious, and punctual among other traits. I presume those traits are largely learned, I might add.

And just like that, I slipped back into my sinning ways. So let us assume that like Winston Smith, I really would prefer to believe something that presently I don’t. Perhaps my reasons are not as noble as Smith’s. Maybe I am only concerned because I know that cultures change, and I wonder about the direction in which ours is currently headed. But regardless of my motives, how do I convince myself?

Tell me, please, what are the factors that explain economic and social performance so well that we can dispense with culture entirely as an explanation?

by Rebecca
Cross posted from Newsneconomics

These are interesting times in global economics, especially from the policy perspective. And although there was a sense of global urgency across the G7 (Canada, France, Germany, Japan, Italy, UK, and US) and the G5 (Brazil, People’s Republic of China, India, Mexico, and South Africa) late in 2008 and early in 2009, policy makers now face very different economic circumstances. The global downturn was (mostly) ubiquitous, but the upswing will not be. The G5 are likely to initiate explicit exit strategies before the G7, as growth, domestic demand, and inflation rebound first.
The downturn in the developed world was very severe, as illustrated by the sharp contraction of GDP of the G7 countries. And across the G5, some countries experienced similar declines, however given the nose-dive that was global trade, the economic resilience via expansionary policy in India and China has been rather remarkable.

Monetary policy – driving down interest rates in order to stimulate consumption via the credit markets – was very successful in the G5, but much less so in the ailing G7.

And finally, inflation has been quite resilient in some countries, notably in the UK and India. As such, the Bank of England has a real trade-off with which to contend: inflation (as measured by the CPI), 1.6% over the year, remains sticky and remarkably close to target, 2.0%. The Reserve Bank of India is seeing food prices drive inflation steadily upward. http://online.wsj.com/article/SB125439928727956013.html?mod=googlenews_wsjSome expect India to be one of the first emerging markets to start tightening (The Bank of Israel was the first).

There are a lot of question marks right now – the biggest is when central banks and fiscal authorities start to pull back. Especially in the G7, too early and one risks the feared W, but too late, and inflation becomes an issue.
Across the G7, rate hikes are unlikely to occur until well-into 2010, and maybe even 2011 for some. Across the G5, however, late 2010 is more likely an upper limit, however, some countries like Mexico are seriously struggling and policy will remain loose for some time. (See RGE Monitor Nouriel Roubini’s latest, “Thoughts on Where We Are” – unfortunately, a subscription is required.)
Read More >
Tags: g5, g7, global economies, Globalization, international Comments Off on g7-vs-g5-in-charts | Digg Facebook Twitter |

Here are some charts to demonstrate what I was talking about. the recent drop in US bond yields has not been accompanied by a similar drop in European rates.

Consequently the spread between US and foreign bonds has narrowed and it no longer compensates foreigners for the currency risk they take when investing in the US.
The consequences are a weak dollar. Note the opposite happened when Reagan first
created structural deficits and the dollar had to weaken enough to create a large enough
trade deficit to facilitate the capital inflow. At that point we had crowding out but it worked through the dollar to crowd out the manufacturing sector rather then the interest sensitive sectors.

It is also working against the Euro as you see the it strengthen when rates spreads widen.

When the US made itself dependent on foreign capital inflows the world got a lot more complex and it was no longer possible to analysis monetary or fiscal policy as if the US were a closed economy. I worry that we are now starting to see the bear case that I have worried about for years when international capital flows prevent the Fed from easing when domestic considerations call for it. I’m not making a forecast, I’m just laying out factors that make the analysis much more complex and that need to be brought into the analysis.

Maybe it is what we need to revive the manufacturing sector, and will be what drives the economy over the next decade. Save-the-rustbelt would love this. But, it creates inflation and real income complications for the rest of us.

I probably is what will happen since Don Boudreaux at the Cafe Hayek blog just got one of his letters to the FT published where he praised the trade deficit. I just base my analysis on the thesis that he is usually wrong.

I realize these charts are simple and the real world is more complex involving covered interest rate difference, etc, but they are adequate to make the point.