I was about to write a post about a Supreme Court opinion issued today, but made the mistake of checking my emails first–and saw this:

I tried but was unable to also capture the photos that are part of the email message, but the pictures are on the website here.

Why not just boycott products we know are made in China?  I just a few days ago replaced my phone, an LG, with a Samsung.  Both companies are Korean–I’m especially glad that Samsung is–and I assume their products are made entirely there.  A large boycott of tech products made in China–Apple, for example–could make this f***ing Yulin festival the last.

Now I’ll draft that post about today’s big-news Supreme Court opinion, although I’m no longer much in the mood.

Really … I can’t stand this.

Apple has some money burning a hole in its pocket

So I was hearing some where that Apple has a lot of money just burning a hole in it’s pocket. Seems there’s an arson named Carl Icahn trying to really ignite it by using twitter.

Apple has implemented a plan to spend $100 billion of it’s current estimate of $148.6 billion pocket money by 2015 to buyback it’s stock. Mr. Icahn has tweeting his joy.   Others say Apple needs to grow to grow it’s stock price.  Now wouldn’t that be the New Deal thing.

A Question About Apple

A Question About Apple

My wife has been an Apple user for a long time. I on the other hand have tended to avoid purchasing Apple products for myself – I just cannot get around the concept of a single button on a mouse, nor why I should be interested in buying a product whose manufacturer apparently makes conscious decisions to remove features based on someone’s aesthetic sense rather than usability. That said, I did notice that Apple products had a tendency to be reliable, though that reliability certainly came at a price.

Recently, my wife convinced to ditch my Droid for an i-Phone so we could use facetime. Perhaps because of that, I’ve become overly sensitive to issues involving Apple products as of late. My mom has a keyboard for her iPad which seems to have stopped working. (I was the one who originally recommended she buy an iPad as I figured it would be easy enough for someone as technologically unsavvy as her to use easily.) The only way I can get my iPhone to admit I have a voice-mail is to power it off completely and then turn it on again. It’s been that way from day one – at first I chalked it up to yet another thing about the phone, but my wife told me it wasn’t supposed to behave that way. And I notice my wife has been complaining about her Mac – something that didn’t happen except rarely with its umpteen predecessors.

Is this just something from my immediate circle (i.e., random anecdotes) or are the company’s products becoming less reliable? Anyone else notice anything?

If you haven’t yet seen The New York Times article on Apple, go read it. I’ll wait. It’s a blockbuster.

As I wrote last month, Apple whines about the fact that it has to pay taxes. But of course, it does much more than whine. It sets up subsidiaries in tax haven states like Nevada to avoid U.S. state taxes, and establishes foreign tax haven subsidiaries in order to avoid U.S. and other government’s taxes. Then, through the magic of transfer pricing, profits made in high-tax jurisdictions becomes taxable only in Nevada, Ireland, Luxembourg, etc. The Times reports estimates by Martin Sullivan that this saves Apple $2.4 billion a year in U.S. federal taxes alone, not to mention what it save in U.S. states or foreign countries. This is a conservative estimate, based on only 50% of its profits being due to U.S. operations. A more realistic 70% allocation of profits to the U.S. would mean that Apple’s federal tax bill would be $4.8 billion higher, according to Sullivan.

Based on extensive interviews with former Apple executives as well as accountants for other firms, Charles Duhigg and David Kocieniewski show that not only does the company practice extensive legal avoidance of its taxes, but that the firm pioneered several of the most important tax avoidance techniques out there:

Apple, for instance, was among the first tech companies to designate overseas salespeople in high-tax countries in a manner that allowed them to sell on behalf of low-tax subsidiaries on other continents, sidestepping income taxes, according to former executives. Apple was a pioneer of an accounting technique known as the “Double Irish With a Dutch Sandwich,” which reduces taxes by routing profits through Irish subsidiaries and the Netherlands and then to the Caribbean. Today, that tactic is used by hundreds of other corporations — some of which directly imitated Apple’s methods, say accountants at those companies.

Not only that: Apple paid, according to The Times article, $3.3 billion in “cash taxes” on its $34.2 billion of worldwide profits, for a 9.8% tax rate, as opposed to the $8.3 billion the company’s 10-K report said it paid. As the article notes:

“The information on 10-Ks is fiction for most companies,” said Kimberly Clausing, an economist at Reed College who specializes in multinational taxation. “But for tech companies it goes from fiction to farcical.”

Some commenters on my article last month actually cited these 10-K figures as proof that nothing was amiss at Apple. As it turns out, the company’s reporting has other major gaps. Its 2011 10-K Annual Report states that it has only two “significant” foreign subsidiaries, both based in Ireland. Apparently its Luxembourg subsidiary — with over $1 billion in 2011 sales, according to The Times — is not significant. Nor are its subsidiaries in the Netherlands and the British Virgin Islands, despite their importance in keeping Apple’s worldwide taxes low. Because Apple only deems its Irish subsidiaries “significant” and does not report on any others’ existence, the Government Accountability Office report of 2008 on tax haven subsidiaries was misled into saying that the company had only one such subsidiary. We can only wonder how many other tax haven subsidiaries are omitted from companies’ SEC filings.

Here’s the kicker: Even “cash taxes” is not a figure that accurately represents a given year’s tax payments, according to The Times.

As Richard Murphy points out, while Apple’s tax strategy is no doubt all legal (“perfectly legal,” as in the title of David Cay Johnston’s great book), “It’s also profoundly unethical.” Apple largely rejects its duty to help pay for living in a civilized society, even as state (like its home of California) and national governments flounder with debt. Its behavior forces one or more of three outcomes, as I have written many times before: shifting the tax burden to others, more government debt, or program cutbacks. Apple’s behavior shows that it’s clearly okay with that.

The solution starts with Murphy’s innovative “country-by-country” reporting, which does not require the tax havens to cooperate because all the information would be supplied by the company. Then, as I noted in November, we need worldwide unitary taxation to strip out the artificiality of companies’ allocation of assets and profits. We could treat Apple’s (and Microsoft’s, and…) “ownership” of patents in Ireland as the fiction it is, and force these companies to pay their fair share of taxes.

Apple Whines About Having to Pay Taxes

Given Ryan’s release of his new plan calling for territorial taxation of corporations comes this example of Apple from Kenneth Thomas, Middle class political economist econoblog:

Apple Whines About Having to Pay Taxes
by Kenneth Thomas

On Monday, Apple announced that it was going to start paying dividends to shareholders, and buy back $10 billion worth of stock. What caught many people’s attention in the subsequent conference call, however, was the company’s pointed statement that it would not be bringing back any of the cash it holds overseas, estimated at $64 billion, or over 64% of its current cash on hand.
The reason, as stated by Chief Financial Officer Peter Oppenheimer, is that it would have to pay taxes on this money if it were repatriated to the United States. Apple made the money, so it owes taxes on it just like you or I would. But because the money was earned overseas (though realistically, some of it probably got there through transfer pricing), it can defer paying taxes on it until the money comes home. Taxes deferred are taxes reduced due to the time value of money, but that’s not enough for Apple. In good Mitt Romney fashion, Apple is working with other companies to try to get the tax laws changed in its favor.What they want, as Carl Franzen of TPM points out, is a “repatriation holiday” that will allow them to bring back the money at a greatly reduced tax rate, as in 2004. Franzen notes:

However, in that 2004 experiment, pharmaceutical companies were the largest beneficiaries and although $312 billion was brought back into the U.S. by some 800 companies, most of the money was spent on dividends and stock repurchases, as Bloomberg and the New York Times both reported, referring to numerous studies. In fact, some of the companies that benefited the most from the 2004 tax holiday ended up laying off employees.

Today, despite having just gone through the worst economic crisis since the Great Depression, U.S. multinationals now have over three times as much overseas as was brought back in 2004, some $1 trillion, according to Franzen’s article. Apple’s action Monday suggests that more dividends and stock repurchases would be the order of the day once again if they got their way.
According to Justin Fox, the $64 billion is “sitting in Apple’s overseas subsidiaries…” This almost certainly means it is in Ireland: According to Apple’s 2011 Annual Report (Exhibit 21.1), it has only two “significant” subsidiaries outside the country (and one significant subsidiary in the U.S.), both of which are in Ireland. Apple, then, is simultaneously benefiting from Ireland’s tax haven status and the deferral provisions of U.S. tax law.
What should be done? I agreed with Citizens for Tax Justice in January that not taxing worldwide corporate profits would give companies even more incentive to make their profits show up overseas than they do now. Fox notes a similar argument from tax attorney Edward D. Kleinbard, who says that ending the deferral provision is the right way to go. That way, companies’ income would be taxed in the year it was earned, and multinationals would get no benefit relative to domestic companies that don’t squirrel away their profits overseas. It would go a long way to ending our current situation where there is one tax law for the 1% and another one for the rest of us.

But Johnson admits he’s a tech toy writer who apparently has no knowledge of manufacturing …. Yet he’s remarkably uninhibited in using his fantasies and abject ignorance as a basis for making sweeping generalizations about the Taiwanese powerhouse.
…
I find this little chart (hat tip Richard Smith) from ninety9 via Alea (who is the antithesis of a socialist) to be more though-provoking than the entire Wired piece: 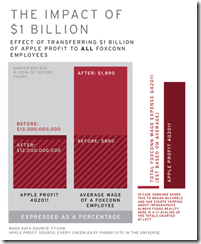 More can be found here.   Lots of links as well adding to the state financed aspects of Foxcomm.