This morning’s (Aug. 9) JOLTS report for May was the best we have seen since the immediate rebound from the pandemic lockdowns.  There was yet another record level continued all of the unfilled job openings, yet another new record low in layoffs and discharges, an enhanced number of people quitting their jobs, and finally – for the first time this year – a huge number of new hires, setting a new m/m record high outside of the immediate lockdown rebound last year.

Here are the month over month percentage changes for each of those metrics:

As noted above, headline job openings (blue), which have been making new all-time records for the month, were finally joined by a nearly 700,000 gain in actual hires (gold):

Voluntary quits also rose, and are higher than any other prior month except this past April:

The record number of people voluntarily quitting their jobs (meaning they are not eligible for unemployment benefits) is testimony to the record robustness of the jobs market.

Finally, while total separations (light blue, left scale) are at normal levels, layoffs and discharges (violet, right scale) declined to yet another all time low:

This is a market that is beginning to arrive at a new equilibrium, after having been out of equilibrium for most of this year. Almost nobody is getting laid off, but lots of people are quitting. But the big change is, while there are continued record openings, finally there is hiring outpacing the level of new openings to fill them.

I want to share two other graphs that I came across recently. The first, from Wolf Richter, shows that continued unemployment claims have declined in the aggregate in States that have cut off pandemic unemployment benefits vs. those that have retained them: 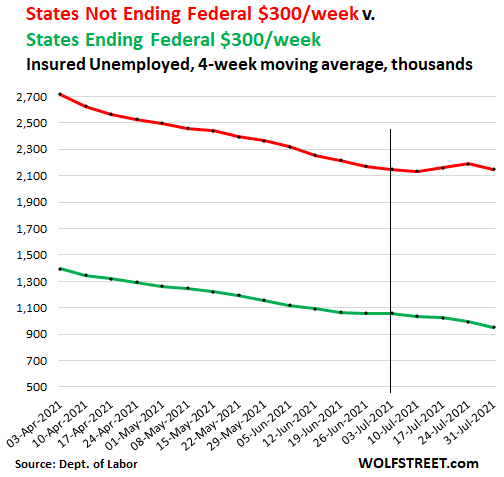 One drawback of this graph is that we can’t tell if the difference is driven by just one or two of the big States, but I think it makes a valid point that is also consistent with this second graph, which I have posted previously but was forwarded to me again last week: 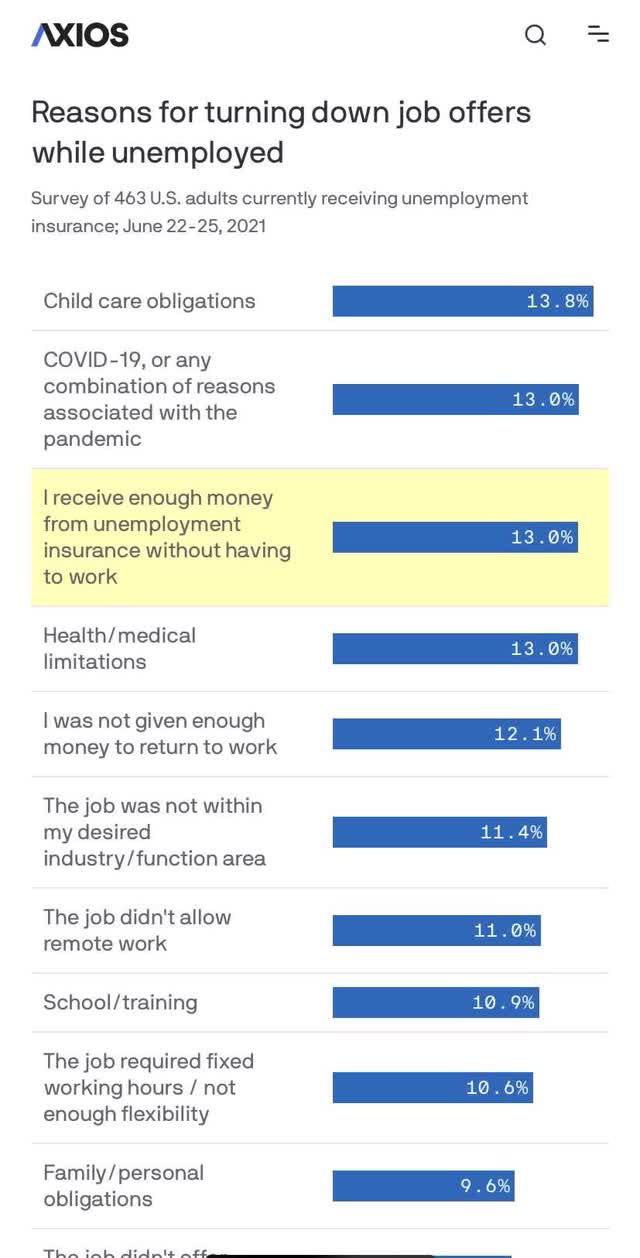 Together, these show that while undoubtedly for some of those people not entering the job market continued pandemic jobless benefits are an issue, for many more the lack of COVID safety in the locale where they live, the unavailability of reasonable-cost child care, or the generally low pay for the labor required, are keeping them on the sidelines.

A great deal depends on the course of the Delta wave. If it burns through the dry tinder and recedes over the next 45 days, then we may see openings gradually level off and begin to decline, while hiring continues to increase sharply. If not, well, . . . .