This past week I nearly became apoplectic about he malfeasance of much of the press and the punditry reporting of Barr’s 6 paragraph substantive “summary” (3 paragraphs each as to “collusion” and “obstruction of justice”) of Mueller’s roughly 300 page report.

As an initial matter, because Mueller’s grand jury is continuing to meet, and there are still subpoenas and witnesses outstanding, it is incorrect to say that “the investigation” has concluded. clearly “the investigation” is ongoing. What *has* concluded is Mueller’s involvement as special counsel, now that an Attorney General has taken over who did not have to recuse himself. Keep that basic point in mind.

But that’s not what got me livid. Much has already been covered by others. But it is one important, even fundamental, aspect of Barr’s executive summary on which I wanted to focus.

Start with the fact that Barr is a very good attorney. He is going to choose his words, and what he cites and what he omits with great care. Now, this is the *totality* of the language from the actual Mueller report that Barr quotes as to collusion:

“[T]he investigation did not establish that members of the Trump Campaign conspired or coordinated with the Russian government in its election interference activities.”

“[T]he investigation established that members of the Trump Campaigndid not conspire or coordinate with the Russian government in its election interference activities.”

All I did was change the phraseology (in italics) slightly. But the meaning is much more definite and sharper. In my formulation above:

1. There was a finding.
2. The finding was no collusion.

But in the quote which Barr cites, and refers to twice more, it states:

1. There was no finding.
2. The “no finding” was that there was collusion.
Notice that the first formulation above is much stronger than the second. And yet, three times in his executive summary, Barr chooses the second – in circumstances where, if the first were true, he certainly would have used that instead.
While the “no finding” formulation is consistent with a “finding of no collusion,” it is also consistent with other readings:
1. The investigation isn’t complete yet (which is almost certainly a correct statement).
2. The evidence is inconsistent, weak, or contradictory.
3. There are too many unknowns to come to a conclusion.

4. While the evidence of collusion is strong, it is not strong enough to support a jury verdict beyond reasonable doubt.

To reiterate, Barr is a seasoned attorney. He chose the weaker rather than the stronger formulation for a reason.  Again, if the stronger statement were the true one, don’t you think he would have used the stronger statement? That he chose the weaker statement is telling. The reason, almost certainly, is that the stronger formulation is not correct, and that some version of the 4 weaker possibilities I’ve listed above is the correct factual statement.
Further, as it was elsewhere pointed out a few days ago (sorry, lost the link),  the bracketed [T] in Barr’s quote of Mueller is doing a lot of work. Because it means that there was a first part of the sentence that was omitted. Put that together with the fact the Mueller’s quote then specifically references that “the investigation did not establish …” and there is compelling evidence that the first part of the actual sentence was a qualifier.
In the first place, had the first part of the sentence been a positive statement, Mueller would not have repeated the phrase “the investigation” in the second part. It would have been something like “The investigation demonstrated that at all time Donald Trump and his Campaign acted lawfully, and thus it did not establish …”

Almost certainly the first part of the sentence is something like “Although…’” “Since …’” or “Despite …” followed by “the investigation…”,  or a formulation like “The grand jury’s work is incomplete, and so the investigation …”

Yet the press and most commentary wrote as if Barr had chosen the stronger formulation I discussed above. Here are some examples: 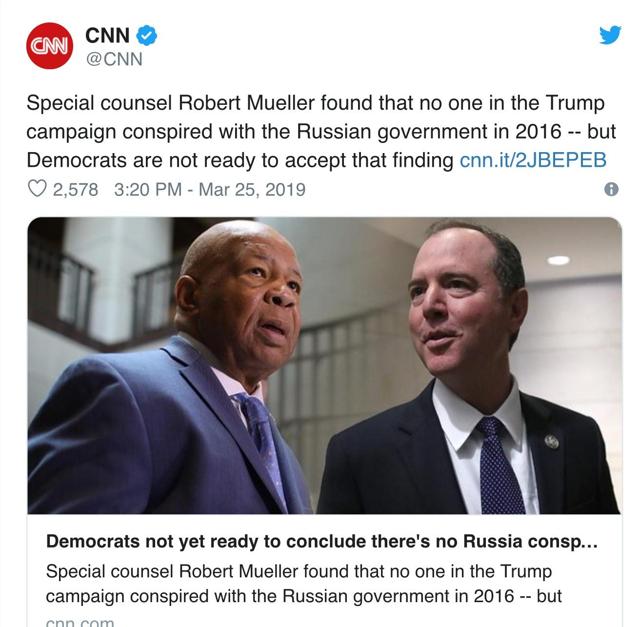 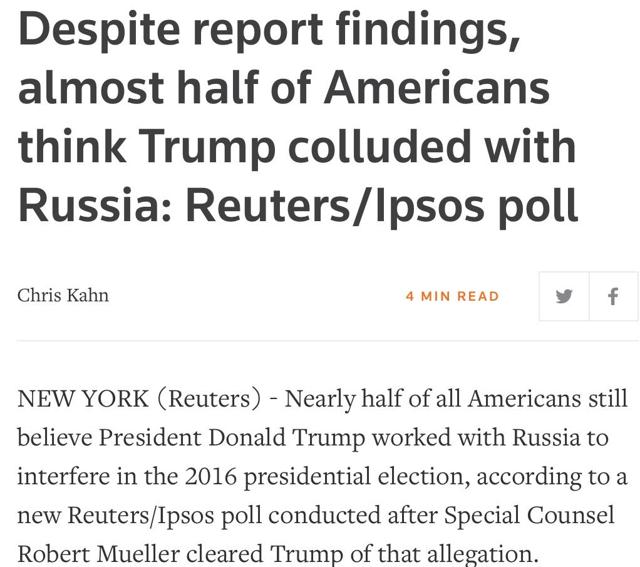 Aside from the fact that none of these people has read the actual Mueller report, the simple fact is they are all incorrect as to what Barr stated as well.
And that probably tells you why Barr, who putting it most charitably, as Trump’s attorney general was going to “tell the truth with the best foot forward,” pounded this quote 3 times in his three paragraph discussion of the collusion issue: because he wanted people who aren’t versed in parsing attorney language to jump to the exact conclusion they reached: the “no finding” of collusion became a “finding of no collusion.”
There is no such “finding of no collusion” in evidence. This is spin, plain and simple. It needs to be corrected.
Comments (3) | Digg Facebook Twitter |
3 Comments