The August and September hurricanes continue to make their impacts felt in the economic data.  Yesterday’s JOLTS report for October, like the October and November jobs reports, shows a rebound from those impacts.  The best way to look at the data is to average the last two months (and this will be true for the next JOLTS report as well, which will be best viewed by averaging all three months).Let’s start as usual by updating the disconnect between the “soft data” of openings in this survey and the “hard data” of actual hires and discharges. As I have pointed out many times, openings can be just chumming the water for resumes, or even laying the groundwork to hire foreign workers. The disconnect betrays an unwillingness to pay new hires more, or to engage in on the job training.

In October. openings continued to run about 10% higher than actual hires: 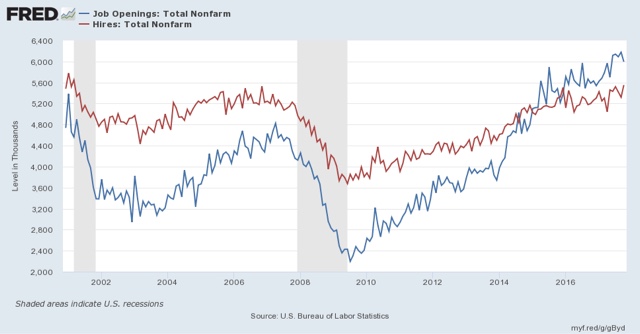 Hires have been basically flat for the last 2 years — specifically since December 2015 — while openings have continued to increase, although they too have been flattish for the last 5 months (especially if we average the last two months): 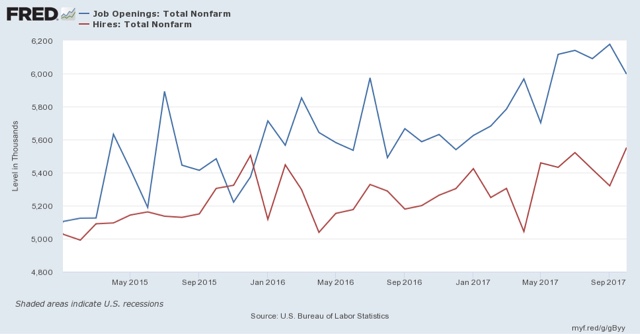 One of my mantras is that hiring leadis firing. To reeiterate, the major shortcoming of this report is that it has only covered one full business cycle. In that cycle, in acord with my mantra, hires peaked and troughed before separations:

Further, in the previous cycle,  hires stagnated, and shortly thereafter involuntary separations began to rise, even as quits continued to rise for a short period of time as well:

[Note: above graphs show quarterly data to smooth out noise]

Here are hires vs. separations on a monthly basis for the last several years (again, mentally aveerage the last two months). At this point both hires and separations are tracing a similar trend over the last 24 months: 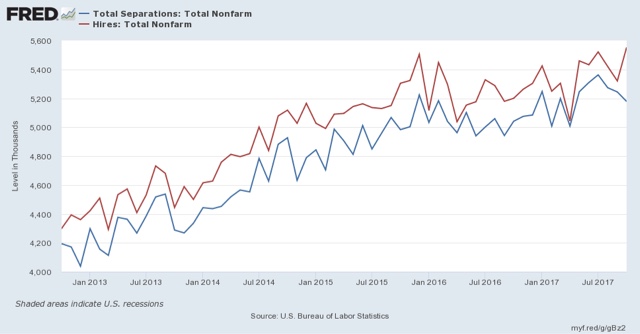 While quits remain at expansionary high levels, involuntary separations bottomed a year ago, and have risen  on a quarterly basis ever since.  Here’s the monthly view of the last several years. The good news is that involuntary separations have fallen in the last several months, even if we average the last two. At the same time, they remain above thei bottom they established a year ago: 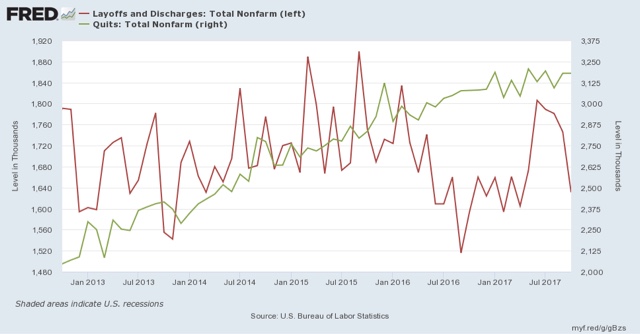 Finally, while  the JOLTS  data is not broken up by states, so it is impossible to know the precise impact of the hurricanes, because the data is broken down by Census Region, we can exclude the Southern Region and see what was going on in the rest of the country, which was not affected.  I’ve prepared that for openings, hires, quits, and layoffs and discharges below (and helpfully marked the expansion highs (low for layoffs)  with an “H” (and “L”) symbol):

This is pretty impressive. It shows that outside of the South, both openings and hires are at new highs, and involuntary separations have receded. The only sore spot is quits, which peaked over a year ago, although they have improved compared with earlier this year.

The report yesterday was a good one, but on the other hand, it is very consistent with being late in the cycle.

Posted by New Deal democrat at 9:02:00 AM Links to this post