On the erection of Confederate memorials: in which I have to get this off my chest

(Update…Dan here…I erroneously posted this post under Barkley”s name but it is NDd.)

On the erection of Confederate memorials: in which I have to get this off my chest

Below is a photograph of the World War Two Memorial on the National Mall in Washington, D.C.

Keep it in the back of your mind. I’ll return to it.

I am a data nerd, and leaping to conclusions about data is a pet peeve of mine. I really hate it when anyone, and particularly my own side, falls for groupthink, jumping to instant conclusions which then become the only acceptable opinion. In the last 48 hours, without consideration of other possibilities, or looking for contrary vs. corroborating data, it seems that just about everyone on the center and left has become an instant expert on the fact that Confederate statues were erected because of Jim Crow.

In support of that, a number of graphics, such as this one, have been used: 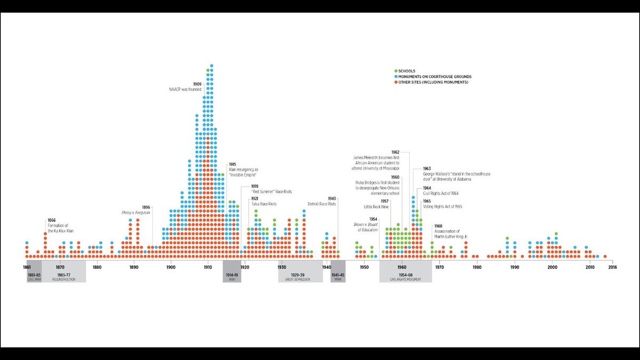 So, has it occurred to nobody that there might be a more straightforward reason why there would be a huge spike in Memorials (cough, cough, hint, hint) ***50*** and ***100*** years after the Civil War?

Yes there were a number of racial incidents that occurred in the 1910s.  But before the last 48 hours, the general consensus was that there was a resurgence in violence associated with white supremacy in the 1920s, not the 1910s.

But 1910-1915 marked 50 years sine the Civil War, and those 20 year old soldiers who fought it  had dwindled to a band of 70 year old men, who did not want themselves or their cause to be forgotten after their generation had passed.

For (huge) example, on July 2-4, 1913, on the 50th anniversary of the Battle of Gettysburg, there was a reunion of both northern and southern armies who camped out at the site. That reunion was commemorated by the Eternal Light Peace Memorial erected on the 75th anniversary during another encampment of the last few survivors: 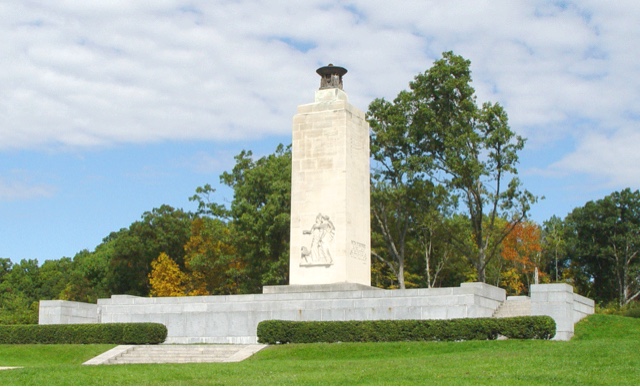 In our own time, we have had a demonstration of the exact same psychology: the World War Two Memorial shown at the beginning of this piece was championed as the 50th anniversary of the war approached, as a monument to the “Greatest Generation,” particularly by veterans such as Bob Dole who did not want their sacrifice  to be forgotten after they shuffled off to the Last Great Muster in the sky.   Bill Clinton signed the authorizing Act for the memorial in 1993.
I am sure speeches were made lionize Jim Crow when the statues were dedicated, and none of this affects the debate on what should become of them. But can our side please not succumb to leaping to conclusions?
Here’s a good test: when were monuments to Union soldiers and leaders erected? I haven’t found any information onlline on that subject. Was there a similar spike in the vicinity of the 50th anniversary of the Civil War? If there wasn’t, then there was something “special” about what the South did. But if there was, then the more straightforward explanation is probably the correct one.

Thank you for letting me get that off my chest.

UPDATE: Oh, good, I’m not the only one.  Here’s a data analyst and neurocognitive researcher replying to Kevin Drum: