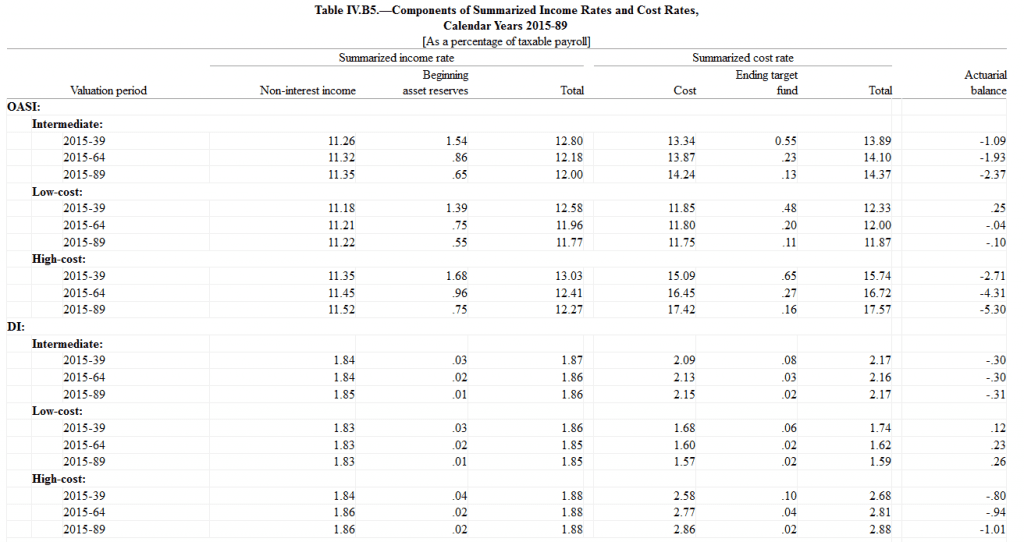 Lots of numbers here but the only ones want to focus on are those in the last column, those which show actuarial balances for each of the OAS and DI Trust Funds for for the next 25, 50 and 75 years for each of the Low, Intermediate and High Cost Alternatives.

The first thing I want to note is how front loaded the crisis is for DI. Under current projections its Trust Fund will go dry in the 4th quarter of 2016. On the other hand the total fix for the period 2015-2040 is only 0.30% of payroll. Which is almost identical to the cost of the fix for the whole 75 year window or 2015-2090. Meaning this isn’t a case of a patch that needs to be revisited a couple decades out. We could if we wished fix DI for 2016 and 2040 and 2090 right now for a very modest cost. Moreover such a standalone fix would meet the requirement the Congress stuck into the budget rule, that any fix for DI would have to positively effect the overall prospect for combined OASDI. While this requirement was inserted in hopes of Obama and the Dems being forced to open up the entire program for discussion and ‘reform’ there is actually no reason NOT to piece-meal it. Fix Social Security DI by a one time increase in FICA of 0.31% of payroll and we have bought more than a decade of space to address OAS.

Another way to look at this is as a down-payment on the Northwest Plan. Once people see how cheap and easy a DI fix was making them understand that a series of increases even smaller than that starting 3 or 5 years down the road might be the optimal choice. Or at least as the opening point for negotiations on the right mix of revenue enhancements.

In the meantime: DI Fixed. Done. For as Far As the Eye Can See. Let’s get started?