“I’m personally offended that they’re playing a high-stakes game of chicken with our national defense,” fumed Weston Newton, chairman of the Beaufort County Council, after hearing Senator Graham’s dire warnings. . Lawmakers look for way out as defense cuts near.

After agreeing to automatic cuts if a resolution to the deficit could not be agreed upon in the budgeting process, some members of the Senate now what a redo. Senator Graham goes to great lengths to stir the guns and/or butter pot of fear.

· The law exempts war costs and allows the administration to wall off personnel levels and military pay, about a third of the Pentagon budget. That means everything else — operations and maintenance, research and development, procurement, fuel, military construction — would face immediate cuts as deep as 13 percent,” Mr. Harrison said.
· “‘Our ability to modernize will be basically gutted,’ Senator Graham told National Guard officers in Greenville. ‘The Marine Corps will have to choose between its giant training camps in San Diego or Parris Island, he told community leaders in Beaufort, a stone’s throw from Parris Island.”
· “‘The C-17 fleet at Joint Base Charleston would be ‘devastated,’ Senator Graham warned city leaders at the Charleston Chamber of Commerce. The cuts to the soldiers and airmen at Shaw Air Force Base would leave behind a ‘hollow force,’ he intoned in a windowless room at the Quality Inn in Sumter.'”

During the month of May, a House majority voted to shift the automatic cuts for Defense (resulting from the failure to approve a budget) to cuts of Domestic programs. The National Defense Authorization Act passed the House 218 to 199 in Reconciliation with Wisconsin Representative Paul Ryan (strictly a guns guy) sponsoring cuts in Medicaid ($50 billion), food programs for the poor ($36 billion), federal retirement funds ($80 billion), and capping malpractice lawsuits to save $49 billion. The Act also proposes to increase Defense spending $8 billion (enough to fix 40,000 $200,000 flawed mortgages

While sequestered an agreement was not reached by the handpicked members of Congress who would never reach an agreement in a decade, the Budget Control Act with its default cuts now adds another $500 billion in cuts (over the next decade) on top of the agreed upon $487 billion in Defense spending cuts agreed to last Summer. In a “Quelle Surprise” moment, the DEMs appear to be showing some backbone and the Republicans are finding the Dems are serious about the burden of program cuts falling equally over all programs.

“We will sit and stagnate with banks and use rockets, To oversee that it’s our bottom line that gets carried to the high seas.” Shikari. Norquist would be proud of these pseudo budget cutters.
Falling back on the rhetoric of a built-in culture of dependency, Ryan fights back on the proposed cuts in domestic programs; “Here’s the problem: These efforts aren’t working. One in six Americans today are in poverty, let’s get back to the idea of America as an opportunity society.” It is not the two recessions in a decade, the cutting of jobs or globalization at issue, or the stagnation of income, which has led to an increasing portion of the Non-Institutional Civilian Population to reside in Not In Labor Force nor is it reductions in tax revenue; it is a culture of dependency as created by domestic programs. Another “Quelle Surprise“

moment in politics! Moreover, if we cut food and healthcare we can force them to work. When did healthcare become that cheap and affordable while earning a minimum wage? Which do you do, cast the bones of the future, gamble with your health, and forgo healthcare to buy food or the alternative is to diet? Investing more money in the military, expanding our military presence, and cutting domestic programs; Rep. Paul Ryan believes will solve the economic problem much of the population faces today.

Maybe in the past, the US in its early product life cycle of growth had the resource and the potential to expand the military and invest in the domestic economy; but today, the resources are limited and continuing to invest so heavily in the military could result in an erosion of global economic position. In “The Rise and Fall of the Great Powers;” Paul Kennedy examines the growth of Defense (guns), 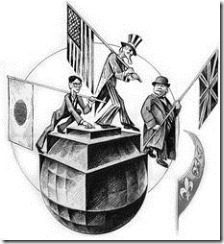 armaments, global commitments, etc. without an increasing and sustaining Domestic economy and Economic Investment (butter) concluding it has been a greater contributor to a nation’s demise as a world power and relegated to second or third tier status. Kennedy does so by reviewing the nations, which have been world powers since the 16th Century and compares those former world powers and circumstance in the end with the US. He analyzes the ability to engage in conflict(s) sustained or otherwise and increased military expenditures without adequate or increasing resource of energy, other natural resource, and domestic productivity. The US with a faltering economy, an unproductive large labor pool, and an emphasis on financial and Wall Street gambling may be no longer able to sustain the military and the military complex it has today.

As Paul Kennedy suggests a continuation of such policy could “lead to the downward spiral of slower growth, heavier taxes, deepening domestic splits over spending priorities, and weakening capacity to bear the burdens of defense

Hmmmmm, does it sound familar? and adds:

The task facing American statesmen over the next decades, therefore, is to recognize that broad trends are under way, and that there is a need to “manage” affairs so that the relative erosion of the United States’ position takes place slowly and smoothly, and is not accelerated by policies which bring merely short-term advantage but longer-term disadvantage. The-Rise-and-Fall-of-the-Great-Powers

It may be time to rethink our present stance on military expenditures and focus on domestic investments which will revitalize the country and bring more of those people Paul Ryan targets back into the Civilian Work Force. When the automatic cuts go into play; they will not go realign military policy favoring domestic policy; but, the Paul Ryan’s of Congress would go a long way towards providing the “Opportunity Society” he is calling for by doing so. It is an opportunity much of Congress seems to be blind too in their quest to unseat Obama and follow the pledges to Norquist.