With Crumbling Bridges and Roads, the Nation is Excited to Build a Giant Wall 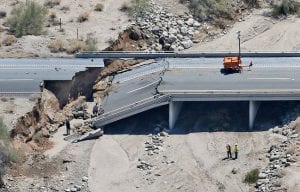 WASHINGTON (The Borowitz Report) August 31, 2015: As America’s bridges, roads, and other infrastructure dangerously deteriorate from decades of neglect, there is a mounting sense of urgency that it is time to build a giant wall.

Across the U.S., whose rail system is a rickety antique plagued by deadly accidents, Americans are increasingly recognizing that building a wall with Mexico, and possibly another one with Canada, should be the country’s top priority.

Harland Dorrinson, the executive director of a Washington-based think tank called the Center for Responsible Immigration, believes that most Americans favor the building of border walls over extravagant pet projects like structurally sound freeway overpasses.

“The estimated cost of a border wall with Mexico is five billion dollars,” he said. “We could easily blow the same amount of money on infrastructure repairs and have nothing to show for it but functioning highways.”

Congress has dragged its feet on infrastructure spending in recent years, but Dorrinson senses growing support in Washington for building a giant border wall. “Even if for some reason we don’t get the Mexicans to pay for it, five billion is a steal,” he said.

While some think that America’s declining infrastructure is a national-security threat, Dorrinson strongly disagrees. “If immigrants somehow get over the wall, the condition of our bridges and roads will keep them from getting very far,” he said.

With Crumbling Bridges and Roads, the Nation is Excited to Build Giant Wall

Man of The Year

“WASHINGTON (The Borowitz Report)—Capping an extraordinary 2018, Donald J. Trump announced on Thursday that he had been named Man of the Year by the terrorist organization known as ISIS.

Trump made the announcement after receiving the news from the leader of ISIS, Abu Bakr al-Baghdadi, whom Trump called ‘a terrific, fabulous guy.’

‘I got along great with him, and he said a lot of nice things about me,” Trump said. “He said ISIS didn’t even consider anyone else.’

Trump, who is expecting to receive an official Man of the Year plaque from ISIS in the next few weeks, said that the award ‘came as a total surprise to me.’

‘It’s a particularly impressive honor when you consider ISIS was co-founded by Hillary and Obama,’ he said.”

Some humor, sarcasm, and disappointment.

JACKSON, MISSISSIPPI (The Borowitz Report)—Celebrating her election victory on Tuesday night, U.S. Senator Cindy Hyde-Smith said that, despite predictions that her state was ready to turn the page on its shameful past, “I never lost faith in Mississippi’s racists.”

“For weeks, we’ve been hearing national pundits say that Mississippi was ready to enter the twenty-first century,” Hyde-Smith told a crowd of supporters at her victory rally. “Tonight, with your help, we proved them wrong.”

Hyde-Smith said that, despite the media’s unearthing of a cavalcade of embarrassing comments and actions from her past, “I never doubted that, at the end of the day, the people of Mississippi would listen to the racist voices in their heads.”

Choking back tears, Hyde-Smith thanked her supporters for honoring Mississippi’s storied heritage of hatred and cruelty.

“Mississippi voters do not want to tear down the relics of our Confederate past,” she said. “As such a relic, I am eternally grateful.”

Exit polls showed that Hyde-Smith performed extremely well with voters who described themselves as bigots, and dominated among those who could not correctly spell “Mississippi.”

WASHINGTON (The Borowitz Report)—Millions of Americans do not want Donald J. Trump to text them that there is an emergency, but “very strongly” want Robert Mueller to text them when this current emergency is over, a new poll shows.

FEMA’s about-to-be-launched “Presidential alert” system drew a sharply negative reaction in the poll, with a majority of Americans saying that they would burn, smash, or otherwise pulverize their phones in advance of the first text that Trump attempts to send them.

By contrast, and by a wide margin, Americans said that they wanted an alert system that would enable Mueller to text them “the second he knows this shit show is over,” the poll indicates.
Poll respondents were amenable to a broad array of methods by which Mueller might deliver such news, including the one-word text “FINITO,” the phrase “ORANGE CRUSHED,” and emojis depicting a thumbs-up or smiley face.