I have access to too many articles on a daily basis to the point of where I can not read them all much less write on each topic. This particular one emanates from SWI or Swiss Info High Pharma Margins Squeeze Health Systems by Jessica Davis Plüss. The topic? Cancer drug pricing is rising rapidly and margins are exceeding 80% of price according to Swiss Public Television known as RTS. I find it interesting the Swiss are discussing what to do with cancer drug companies, the pricing of the drugs, and still maintain a good relationship. This is also relevant to non-cancer related drugs.

As you must know by now, healthcare pricing is controlled in Europe. Pricing and costs are more of a complaint in the US and still not an actionable item where Congress takes notice and “actually does something.” Some examples include cancer drugs such as Rituxan, etc. and far more common drugs such as Humalog, Vimovo, and the more familiar one in EpiPens (epinephrine autoinjector).

EpiPen is a good example of out-of-control pricing.

In 2007 Mylan acquired the EpiPen brand from Pfizer; however, Mylan did not acquire the Pfizer subsidiary which manufactures EpiPen. CEO Heather Bresch reported to a congressional committee Mylan pays $69 per two-pack to the Pfizer subsidiary Meridian Medical Technologies. The price of a two-pack of EpiPens is ~10 times its cost.

To calculate the costs of manufacturing a product, one does not need to be an engineer or a PhD. Knowledge of the overhead, process, materials, and labor allows an astute and experienced layman to calculate the cost. Even so in 2016, a Silicon Valley engineering consultancy did perform an analysis of an EpiPen components and estimated the manufacturing and packaging costs at about $10 for a two-pack.

Whether the cost is $10 for a two pack or $34.50 for one EpiPen as Mylan claims, the costs do not vindicate wholesale price increases going from $100 in 2009, to $265 in 2013, to $461 in 2015, and finally $609 in 2016. With insurance some still have a sizeable co-pay. The list price at a CVS pharmacy is $733 for a two-pack. In some cases, a manufacturer will issue a coupon to a buyer which can be used at the pharmacy and shuffles the costs to the insure company leaving the user with a smaller co-pay. In the end, someone is still paying an out-of-control price.

The costs reflected in the attached chart come from Heather Bresch’s testimony to Congress. $334 of the $608 is paid out to pharmacy benefit managers (third-party administrator of prescription-drug programs for end payers, such as private insurers, and Medicare Part D plans), insurance companies, wholesalers, and pharmacy retailers leaving Mylan with $274 after rebates and fees. Deduct the cost of $69 of a two-pack paid to Meridian, and supposedly Mylan is left with $205 for each two-unit injector. After the company deducts expenses for research and development, sales and marketing, regulatory compliance, distribution and various access programs, profit drops to $100 per two-pack. As stated Mylan proposed cost structure is being challenged when compared to the expected costs of manufacture. WSJ claimed Mylan improperly assigned a tax to the expected profit which decreased Mylan’s profit by $66.

Times have changed since Jonas Salk and Albert Sabin developed their polio vaccines and purposely did not patent them. As reported by a Forbes analysis, by not patenting their vaccines each inventor/researcher lost out on profits in the $billions.

Jonas Salk had a simple answer when asked why he did not patent his vaccine; “Can you patent the sun?” Salk was not called the “Father of Biophilosophy” without reason . . . a philosophy taking in epistemological, metaphysical, and ethical issues in the biological and biomedical sciences.

Before he died, Salk was attempting to create an AIDS vaccine which he would not have patented either. Times have changed since the Polio vaccine.

As one commenter said, Salk could have patented his discovery; but his research was federally funded and all of his profits would have gone to the Federal Government. Research as tied to business interests has gone in a different direction from where Jonas Salk began as the law has changed. In place of social responsibility, a profit motive has taken hold.

Novartis CEO Vas Narasimhan: “Cell and gene therapies are bringing about a new era of cancer medicines going beyond ‘just improving lives and are saving them.'” continuing; The new therapies are challenging the traditional model for paying for medical treatment and the industry is divided on this approach. Pricing for these one-time usage therapies are to be based on four key measures of value – the improvements they offer to patients both clinically and in terms of their quality of life, and the resulting benefits to the health-care system and society. As pointed out in the Swiss Info article, based on value to the patient, pharmaceutical companies believe they are justified in getting back $14.50 for every dollar invested in bring a new drug to market.

Pharmaceutical companies have noted four industry determinants (page viii-ix) of setting pricing as detailed in WHO’s “Pricing of cancer medicines and its impacts to the setting of medicine prices” technical report.

(1) Costs of R&D; Prices must account for the R&D costs of the approved medicine and the expenditures from investigating drug candidates for which marketing approvals did not occur, failed attempts, and the cost of capital.

(4) Sufficient financial returns to incentivize future R&D programs. The industry justifies prices of medicine by stating the return on investment needs to be sufficient to incentivize the discovery of future medicines and notes 20% of its revenues were re-invested into R&D.

A little bit of a discussion. Point 1 is stating the industry must account for failures, as well as the successes, and changes to the initial product. Point 2 is a capacity remark to which I would say if properly planned the capacity would already be there and the increase in one additional unit is minimal. No one plans to 100% of capacity. Point 3 assesses the value of human life by assigning a price to it with regard to the medicine or “what would you pay for a drink of water in the desert when there is none available for hundreds of miles.” Point 4 is new research and states we need to be able to have revenue to invest in it after expenses. I would question how much is actually needed.

And the other 80% which is now attributed to profit margin? 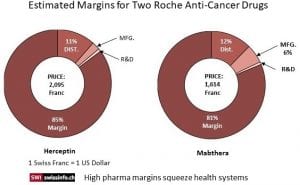 Typically Pharma has defended new product pricing with a justification of large investments in research and development and numerous clinical trials which can be successful or failures. Indeed CEO Vas Narasimhan pretty much says the same in bringing a product to market and also calls on additional criteria as justification for the increased pricing.

As linked to by Swiss Info, the World Health Organization (WHO) in reviewing the high prices for cancer drugs found the pricing strategy resulted in margins multiple times higher than just the R&D costs and even so when Distribution and Manufacturing costs were included in the analysis. For example, a vial of the breast cancer drug Herceptin costs approximately CHF50 to produce. In 2018 a vial was sold for CHF2,095 in Switzerland or 42 times its manufacturing cost. According to the WHO report ; for every dollar invested in cancer research, pharmaceutical companies earned on average $14.50 (CHF 14.50) in revenue.

The calculations of the cost data (chart) for two specific cancer drugs showed the final pricing for the two top treatments bear little relationship to R&D and/or Manufacturing costs. Swiss TV station’s (RTS) exposé revealed the pricing for two of Roche’s top cancer treatments are far more than just a recovery of R&D, distribution, and manufacturing costs. Herceptin costs are approximately CHF50 ($50) to manufacture and sold for CHF2,095 in Switzerland in 2018 which is 42 times the manufacturing cost. In terms of cost recovery, Herceptin has earned Roche CHF82.8 billion (85% profit margin) over 20 years or more than enough to recoup an investment and provide for R&D. A study of Novartis’s Glivec by the University of Liverpool revealed similar margin excess.

Roche media relations team member Ulrike Engels in defending the pricing strategy suggested the RTS calculations based on just Cost plus Margin data shows a fundamental misunderstanding of how prices are determined. Similar to what was stated by Novartis CEO Vas Narasimhan, Roche/Engels pricing of certain drugs which are life saving are based on the benefits or improvements in the treatment of patients both clinically and in their quality of life afterwards and the resulting benefits to the health-care system and society. It is not just a cost to bring a product to market plus a respectable margin. Neither is it a realization by Roche of having recovered investment costs and gained sufficient funds for R&D, the Failures, the Trials, and the Capitalization, it can relax its pricing.

Pharma companies are also using the “value-based” analysis to determine pricing for old drugs even without improvement. This is precisely what HHS Alex Azar did at Eli Lilly with Humalog a decades old drug used to treat diabetes. The six million diabetic Americans watched as insulin (Humalog) prices tripled under Azar’s watch at Eli Lilly from 2007 to 2017. During his tenure as president and vice president, Eli Lilly raised the price of Humalog by 345% from $2,657.88 per year to $9,172.80 per year. The resulting pricing shock forced some patients to attempt rationing their taking of the product which in some cases caused death.

According to a JAMA study in 2017, the rising cost of healthcare and “after accounting for inflation, healthcare expenditures increased $933.5 billion from 1996 to 2013.” 50% of the increase in healthcare costs during that period was simply due to higher prices. Be that as it may, different chronic diseases have different patterns of price increases. The biggest increase was seen in diabetes care and driven largely by the rising costs of pharmaceuticals. During that period of time, Diabetes care increased $66 billion in cost of which an approximate two thirds of it being solely due to the increased cost of the pharmaceuticals used in treatment.

To be redundant, value based analysis methodology considers the extra years of life gained, the quality of life during the time period lived, and the healthcare savings gained (an overall cost reduction in treatment), in addition to other benefits, to determine the value of the drug to a person and society in which to set a price. This is the argument being made. Roche’s Herceptin targets HER2-positive breast cancer, an aggressive cancer which occurs in younger women, and claims the benefits of treatment being particularly high thereby deserving of a higher price.

Novartis applied the same “value-based” analysis to justify pricing for Kymriah used to treat unresponsive b-cell acute lymphoblastic leukemia when there are no other options for them or their families. It is a one-time treatment with follow-up treatments far less frequent than traditional therapies.

The questions can be asked of whether it is morally responsible or acceptable for a company to set the valuation/pricing of a product used to save a life at a level tens of times higher than actual cost to bring it to market? Is it also morally responsible or acceptable to increase an older product’s pricing when the costs have been recovered many times over? Yet, this is what the corporate expectation is for cancer drugs with its pricing and also for older drugs such as Humalog, Vimovo, and EpiPen applications based upon a value analysis to patients.