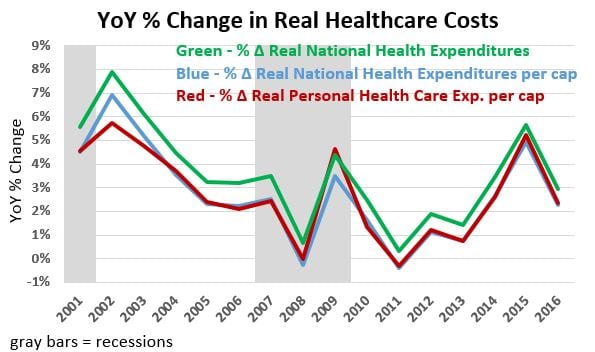 Healthcare Costs – I Got Confused by Some Graphs

I don’t follow healthcare as much as others at this blog. I started playing around with some graphs at FRED and got a bit confused. I don’t mind being confused, but I like to clear up that confusion eventually. So perhaps someone can tell me what’s going on.

First, this graph of healthcare expenditures / GDP which seems to indicate that Obamacare bent the cost curve:

Here, it looks like the rate of increase in costs declined through the early oughts, went up as the economy tanked (i.e., healthcare costs continued rising but GDP fell), and then stayed more or less constant (through 2014,the last year with this series).   This graph doesn’t say Obamacare didn’t help, but it doesn’t scream that it does either.

But this next graph is a real problem.  It shows healthcare expenditures per capita:

What am I missing?

One of the topics I’ve railed about many times during the decade and change in which I’ve been blogging is that society would be much better off if we forced people to pay the cost of negative externalities they impose on other people through their behavior. An obvious example would be making polluters pay for the cost that the pollution they emit inflicts on everyone else.

But it turns out there are a lot of these behavioral externalities in healthcare. For instance, here’s an infographic I took from Blue Cross Blue Shield: I imagine there are a few instances where obesity is a medical condition due to circumstances outside the control of a patient’s willpower, but I suspect that accounts for very few cases. Most people in today’s America have the ability, during most of their life, to control to a fair extent how much they eat, drink, smoke and exercise. I am no doctor, but I understand some (and I hasten to repeat the word  “some”) of the conditions can, in some cases, be brought about by a person’s behavior. For example, HIV can come from unprotected sex with prostitutes or IV drug use, diabetes from poor dietary choices and lack of exercise, and some psychotic disorders can be brought on or worsened by by drug use.

What if, going forward, we should cease to cover the costs of health conditions brought on by a person’s own behavior (when they can be identified as such)? This would be disruptive, so I don’t think it should be done cold turkey, but rather the way Social Security benefits get cut by ratcheting up the age at which a person can get benefits. For example, we could simply state that on date X, any new cases of lung cancer which are traceable to a person’s tobacco use are not to be treated at the expense of Medicare or Medicaid, and private insurance companies might be encouraged to do the same.

Note – people who used to smoke, or eat unhealthy, or not exercise a long time ago might have been submitting to societal pressures. But for the past few decades, the world has been a different place. Societal pressures now are to eat healthy, eschew illegal drugs, avoid smoking, avoid drinking in excess, and to exercise. We’ve moved from “smoke ’em if you got ’em” to “if you want to smoke, you need to do it in the smoking section.” Then we went to “you need to go outside to smoke.” These days you see smokers forced to stand some distance away from many office buildings if they want to get their nicotine hit.  Next to where I work are some office buildings occupied by a health insurance company.  Smokers who work there seem to be forced leave the premises completely  (they are usually standing in the street, even in the rain).   For many people, getting lung cancer went from the cost of conforming to social norms to being a consequence of anti-social behavior.

So what would be the effect of taking the treatment for these conditions off the public purse? I’d say the following:

1. We would see some number of cases of fraud where people would insist their behavior did not induce some outcome. A lying patient is harder to treat, so I’m guessing this would go some way toward worsening the outcomes of successful fraudsters.
2. The life expectancy and perhaps qualify of life of people who self-induce these problems would go down.
3. The incentive of people to minimize these behaviors would go up. Of course, not all of them would respond the right way, but some would. Particularly in light of the life expectancy issue in point 2. Overall healthcare costs would go down.
4. The cost to the public would go down.

(One comment… I am pretty sure I recently read something proposing some part of this recently, but for the life of me, I cannot remember what or where. My apologies if I’m inadvertently stealing someone else’s idea.)