Last December 2017, Envision Healthcare Corporation paid an approximate $30 million to settle allegations for subsidiary EmCare doctors getting bonus payments for admitting patients to hospitals when it was not necessary.

A subsidiary of Envision, EmCare is a provider of physician services to emergency departments, inpatient services for hospitals, acute care surgery, trauma and general surgery, women’s and children’s services, radiology / teleradiology programs and anesthesiology services. If you have ever been hospitalized, Radiology is one service which always seems to have someone other than the hospital billing you. One study of billing practices of 194 hospitals in which EmCare handled billing and was out-of-network; the average out-of-network billing rate was 62% higher than the national average of 26%. When EmCare’s billing was compared to that of a competitor TeamHealth, the latter’s billing in other hospitals was less and there was a smaller increase in out-of-network service billing.

If you remember a while back, Rusty and I would discuss the ongoing consolidation of hospitals, clinics, and pharmacies. The reasoning behind the consolidation was to have enough market clout when negotiating with insurance and Medicare. Having a larger presence and being able to set pricing nationally and regionally is a big factor in the rising cost of healthcare.

Envision is the biggest player in staffing ERs and Anesthesiology departments with 6% of the $41 billion emergency department and hospital-based physician staffing and 7% of the $20 billion anesthesiologist staffing. Two-thirds of all Emergency Departments (ED) do some type of outsourcing even if it is short term.

United Healthcare insurance is pitted against Envision’s practice of over pricing for it’s 25,000 emergency doctors, anesthesiologists and other hospital-based clinicians charge to patients and pass through. The disagreement over pricing and how it is paid for by insurance as billed by 3rd party providers will spill over into patients being billed more frequently for higher prices not accepted by insurance. 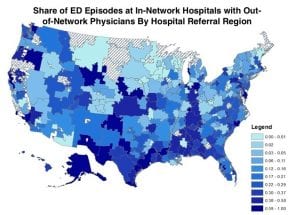 UnitedHealthcare’s 27 million privately insured patients could face expensive and unexpected doctor bills as of 2019 if Envision doctors become out-of-network for United Healthcare. According to the research group NORC at the University of Chicago more than half of Americans have received an unexpected medical bill. In another study by economists from the Federal Trade Commission in 2017, 1 in 5 emergency-room admissions resulted in a surprise out-of-network bill.

While the ACA increased the numbers of people insured, approximately 20% of people have problems paying medical bills largely because healthcare is still rising faster than most other costs and income. One source of increased costs has been the billing from out-of-network doctors billing patients utilizing in-network facilities such as hospital Emergency Departments. NEJM recently published a Yale Study by Zack Cooper, Ph.D., and Fiona Scott Morton, Ph.D. (Out-of-Network Emergency-Physician Bills — An Unwelcome Surprise) reported on the increased occurrence of surprise-billing for out-of-network services.

Patients typically do not choose to use out-of-networks doctors or facilities. They will choose an in-network facility and expect an in-network doctor(s) to care for them. Healthcare insurance expects its buyers to use in-network services or pay a penalty for not doing so. When one arrives at an in-network Emergency Department, they expect to be cared for by an in-network doctor. I have yet to hear a doctor on duty offering up he or she is not employed by the hospital but instead by a third party. The patient is not aware of in-network or out-of-network issues until they get the bill. The market place is not working for the customer and the doctor still gets the business regardless of the price and there is no competition from other facilities or in negotiated pricing due to having insurance. The third party employer knows this issue as well as the hospital. The only fool in the room is the patient waiting to be cared for and be used. Insurance will pay a portion of the cost or negotiate with the hospital for a price. The third party company employing the doctor may yet charge the patient for the balance of the costs associated with the doctor and at a higher percentage than normal. The uncovered and unexpected higher cost is the rub.

The authors of the Yale study analyzed the claim’s data of a large commercial insurance company insuring tens of millions of people, focusing on ED visits for people under 65 years of age, occurring between January 2014 and September 2015, and at hospitals registered with the American Hospital Association. They chose hospitals with over 500 ED visits and identified the Hospital Referral Region (HRR). Utilizing the breakdown criteria yielded “more than 2.2 million ED visits Broken in 294 of the 306 HRRs, covering all 50 states, and capturing more than $7 billion in spending.” The map of the United States (above) is a pictorial representation of the data.

Summarizing their finding and estimating cost impact, Yale: “of the 99.35% of ED visits occurring at in-network facilities, 22% involved out-of-network physicians. The greater than 1 in five ratio (22%) masks a significant geographic variation in surprise-billing occurrence to patients among HRRs. 89% and 62% of surprise-billing rates occur in McAllen, Texas and St. Petersburg, Florida as compared to Boulder, Colorado and South Bend, Indiana with the surprise-billing rate there near zero.”

Envision questions the validity of the study and blames United Healthcare for not paying the billing and claiming insurance is the problem. Insurance coverage is a problem; but, it is not of the same magnitude when one starts to look at the increase in costs of $1 trillion from 1996 to 2013 of which 50% was due solely to price increases.

And yes there are “potential” extra costs for patients who are treated by an out-of-network ER physician or any out-of-network service. In one hospital I was in, Radiology was out of network as well as one surgeon. Both negotiated a rate with United Healthcare. Then too, this was written into the ESI policy. I had no choice in doing in-network as I came through the ER each time and was too ill to decide and/or go to another hospital.

In a Kaiser/New York Times Survey: Among the insured with problem medical bills, a quarter (26%) said they received unexpected claim denials and about a third (32%) say they received care from an out-of-network provider that their insurance wouldn’t cover. The out-of-network charges were a surprise for a large majority: 69 percent were unaware that the provider was not in their plan’s network when they received the care.

The same NEJM/Yale study which had looked ay frequency of surprise Out-of-Network Emergency-Physician Bills also looked at the costs of the bill and what was left over for patients to pay. On average, in-network emergency-physician claims were paid at 297% of Medicare rates. For reference in the Yale study, the authors used other medical disciplines as a benchmark. Orthopedists are paid at 178.6% of Medicare rates for knee replacements and internists are paid at 158.5% of Medicare rates for routine office visits. The Yale study showed out of-network emergency physicians charged an average of 798% of Medicare rates resulting in a calculated, potential, and additional cost for patients. The difference between the out-of-network emergency physician charge and 297% of the Medicare rate for the same services in the patient’s location could be billed for an average balance of $622.55 (unless their insurer paid the difference). It is also important to note that the potential balance bills can be extremely high; the maximum potential balance bill faced by a patient included in our data set was $19,603.

The suggested solution from the study was for states to require hospitals to sell a bundled ED care package that includes both facility and professional fees. In practice, that would mean that the hospital would negotiate prices for physician services with insurers and then apply these negotiated rates for certain designated specialties. The hospital would then be the buyer of physician services and the seller of combined physician and facility services. If physicians considered the hospital’s payment rates too low, they could choose to work at another hospital.

The hospital, doctors, and the insurance companies would compete for the best package to service the patients utilizing them. In the end, this is a stopgap measure until healthcare costs can be brought under control in a better manner.