An important reason why I am so insistent on dividing data into long leading, short leading, and coincident indicators is in order to avoid the most common pitfall in any forecasting, which is that of projecting the current trend forward.

This morning PPI for February was reported. Frequently – but not always! – commodity prices lead producer prices, which in turn lead consumer prices.

But when it comes to one commodity of some modest interest to consumers, the price of gas, those projecting the hyperbolic trajectory forward have gotten something of a rude awakening in the past day, as spot oil prices declined sharply, from over $130/barrel to $95.88/barrel as I type this: 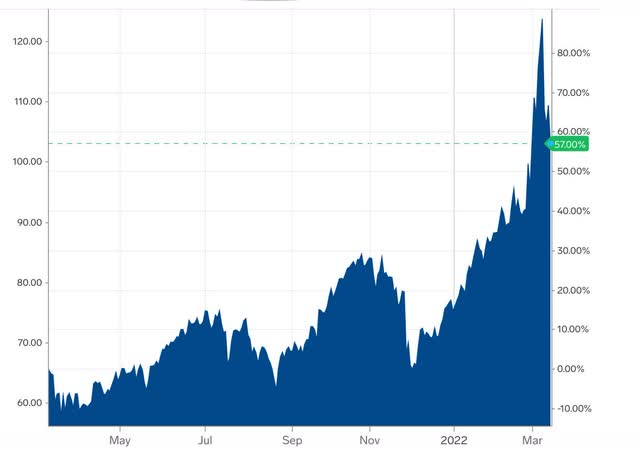 Will prices continue on trend, or whipsaw again higher? Nobody really knows! But if you had simply projected the recent sharp increase forward, as of this morning you were really wrong.

Oil prices lead gas prices at the pump by several weeks, and in the past week the latter appear to have at least stabilized:

If oil prices don’t whipsaw higher again in the next few days, you can expect gas prices at the pump to go back down below $4/gallon in the next couple of weeks.