Coronavirus dashboard for November 2: the winter wave has begun

Coronavirus dashboard for November 2: the winter wave has begun

The Delta decline is probably over. Nationwide US cases are up 4000/day from one week ago. The Northeast and South census regions still show a decline, but West and Midwest regions show increases: 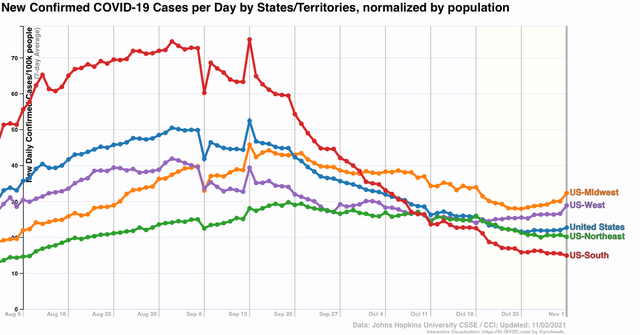 One week ago only 3 States were in the “increasing” category. Now the increasing trend States include: NJ, AL, CA, NV, AZ, CO, NM, ND, SD, MI, MN, IA, and NE. There are also slight increases in NY, RI, IN, and WI.

The declines are almost all in the warmest States + those with the most recent outbreaks. The increases are with few exceptions in the colder States.

On the plus side, deaths are down 35% from the Delta peak into the middle of the “normal” range for this pandemic: 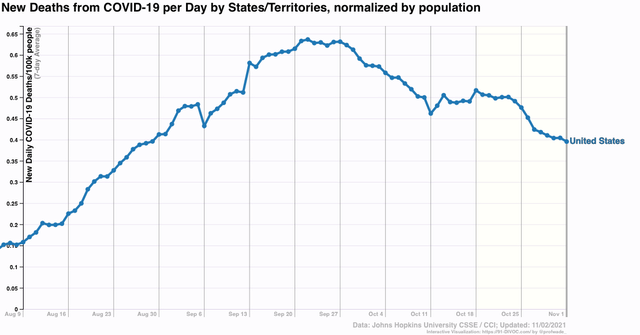 But as of yesterday, 80% of all US adults had at least one shot, and later this week we will probably cross the threshold of 70% of all US adults completely vaccinated. Including those age 12 and up the respective numbers are 78% and 68%. We can expect lots of younger school-age children to have at least one shot before Thanksgiving, and be fully vaccinated by Christmas.

Plus, on average (with plenty of variation) being infected recently almost certainly conveys some resistance to reinfection – and in the past 4 months, about 4% of all Americans had *confirmed* cases, most likely meaning that close to 10% were *actually* infected.

Put that together, and there are significantly fewer people susceptible to infection at present than there were 4 or 12 months ago, so I strongly suspect this winter’s wave will not be as bad as either last winter’s, or Delta.