As has been the pattern for the last several months, August data started out with a strong reading on manufacturing, while July ended with weak data on housing construction. As a side note, the latest read on motor vehicle sales also slid south.

Both the overall and new orders components of the ISM manufacturing index remained very strong, with the former increasing slightly m/m from 59.5 to 59.9 and the latter by 1.8 from 64.9 to 66.7, both far above the breakeven point of 50.0: 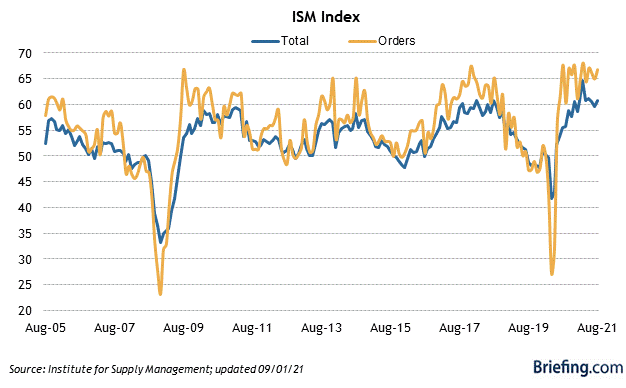 As I have said virtually all this year, the simplest way to read this is that the manufacturing sector remains on fire.
The story remains different with this morning’s release of July construction spending. Total nominal spending increased 0.5%, and spending in the long leading residential construction sector increased 0.6%, both all-time records:

But just as has been the case virtually all year, when we deflate by the cost of construction materials, that increase disappears, and in fact shows a plunge for the year, although there was a very slight increase this month:

Finally, recently I have stopped reporting on auto sales, because the manufacturers have reduced reporting to once a quarter, so most of the data is just an estimate, but the BEA does its own separate report, which was last updated on August 27 for the period through July. And the news here was that both light vehicles and heavy truck production declined further:

Since houses and cars are the two most important, and the first and second most leading, indicators of the consumer sector of the economy, this is needless to say not a good trend, although neither are at levels typically associated with the onset of a recession at this time.