No, liberals are not to blame for political polarization

No, liberals are not to blame for political polarization

Over the long weekend, Kevin Drum picked a fight by saying that you should “blame liberals” for culture wars, arguing that liberals have shifted their positions much more over the past two decades than conservatives.

This has provoked some strong counter-arguments, but what has struck me – as usual – is how little people have actually looked at the data. When you do so, there are at least three very important contradictions or limitations to Drum’s argument.

Drum’s decisive evidence is this graph from a 2018 report by the Pew Research Center on partisanship:

And indeed, Democrats have moved much further to the left than the median GOPer has to the right.

Except. Except he left out the fact that Pew did an identical study in 2014, and here’s what the same graph looked like then: 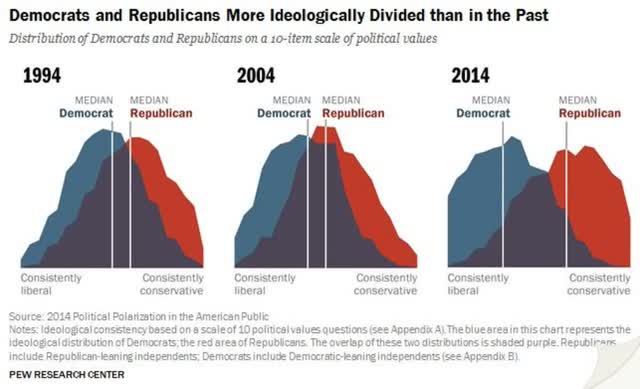 Oh. Notice that the differences aren’t nearly so asymmetrical in 2014 as they were in 2017. So what happened in between those two years that made Democrats more sharply break from the center?

Pew has been polling using the same or similar questions for about 2 decades. There were roughly 20 questions polled, with the results shown, in their 2018 report. About half dealt with economic issues, a little less with social issues, and a few with international issues like diplomacy and the military.

While I won’t show all of the results, Pew itself put together the below set of responses to 10 of the questions, which are pretty representative of the overall sample: 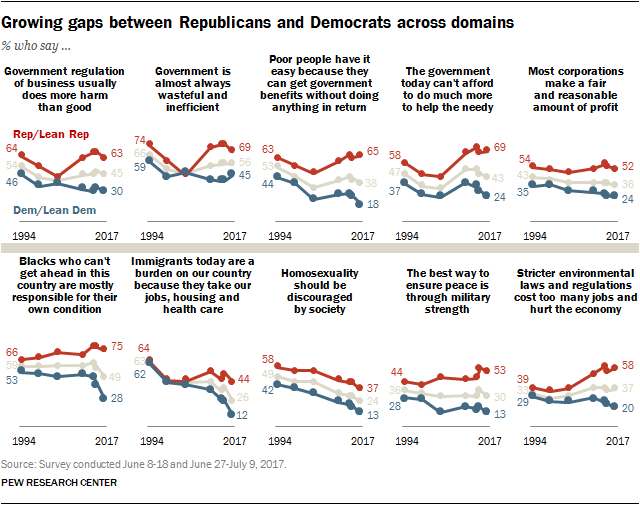 I created a spreadsheet of the differences in responses between Democrats and Republicans since the inception of all 20+ questions, and also from 2014 (or sometimes from 2012 or 2010 if that result was called out numerically by Pew). While I won’t post the entire chart, suffice it to say that with the exception of government help for the needy, and whether environmental regulation hurts the economy, in which the GOP moved further off center since 2000, as to virtually all other issues Democrats did move further from center during the 2 decades, and in about half of the issues, moved considerably further from “median” positions since 2012 or 2014 than the GOP.

But the three most important issues by far, all of which are shown in the Pew graphs above, were racial discrimination (as to which Democrats shifted 13% further than GOPers since 2000, and 36% since 2010), government help for the needy (17%) – which many respondents undoubtedly viewed as a proxy for aid to racial minorities, and most of all immigration (23% and 29% in two variations of the issue).

Drum also cites several polls on whether respondents are “satisfied with” laws on guns and taxes, as to which, unsurprisingly, in 2017 GOPers were much more satisfied than Democrats compared with a decade or more earlier.
Why? A bunch of state laws were passed easing gun restrictions, and the GOP Congress and Trump passed the “Tax Cuts and Jobs Act of 2017.”Since Democrats were very *dissatisfied* with those same new laws, the polls artificially make the Democrats’ response appear more extreme, because the responses are calibrated against a moving target.
There is pervasive evidence that while the US population skews heavily towards economic populism, on social issues there is virtually a 50/50 split. The main drivers of Democrats’ move to the left since 2014 have been on perceptions of racial discrimination and on the issue of immigration. The former is likely largely due to the whole “black lives matter” movement that stated out with the killing of Trayvon Martin in 2012, and picked up steam after shootings like those of Tamir Rice near Cleveland and Michael Brown in Ferguson, MO, in 2014. The latter has been heavily impacted by the plight of “Dreamers” who the GOP in Congress, and President Trump, consistently refused to protect.

On the broader issue of immigration, it is clear that it has been a problem for liberals not just in the US, but throughout Europe as well, and is in great degree responsible for driving the right wing authoritarian response in both places. In the past I have supported the idea of Democrats’ moderating their stance on that broad issue, employing a dual strategy of “the rule of law” as well as “the rule of equity” to minimize illegal immigration while granting full rights to Dreamers.

I’ve also written in favor of making use of  a“K.I.S.S.” approach to new government programs, arguing that methods like Social Security and Medicare, which use FICA taxes in which everyone pays in, and everyone can take out, enjoy much broader support than programs that specifically pay out to the needy and phase out at working class incomes. But to the extent that Drum is saying it is Democrats’ fault that they support Dreamers and Black Lives Matter – partly *in reaction to* more extreme actions by right wingers – I  strongly disagree.