Coronavirus dashboard for June 21: watching the States with flat or increasing rates of new cases

Coronavirus dashboard for June 21: watching the States with flat or increasing rates of new cases

For the past week I have been sounding the alarm about the economic impact of the “delta” variant of COVID. We are probably already beginning to see its impact on the case count in several States, with many more primed to join the pack, so that is what I want to focus on today.

To begin with, let’s compare the 3 countries that have had the most aggressive vaccination programs: the US, UK, and Israel: 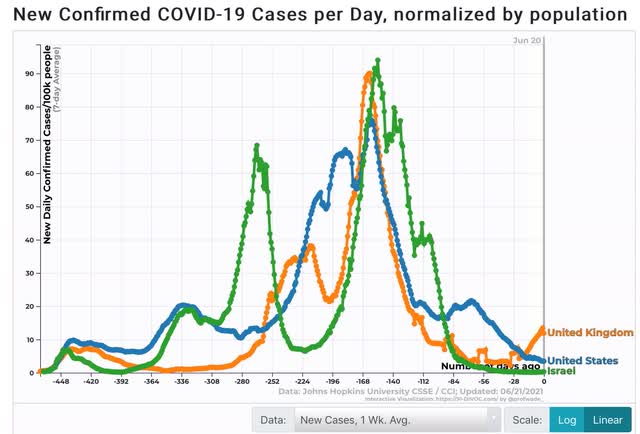 Israel has defeated the virus. Its case count is down to virtually zero. Vaccinations work! But thanks to the “delta” variant, the UK has seen more than a tripling of new cases over the past month. That is where the future likely lies for at least the unvaccinated portions of the US.  One difference between the two is that the UK emphasized maximizing the population with one dose, so when the variant hit, relatively few were fully vaccinated.

Here is what the county-by-county breakdown of vaccinations in the US looks like (note that several States do not fully report, so are greyed out):

Among other places, note the many counties along the lower Mississippi River and in the panhandle of Florida in which less than 25% of the population is fully vaccinated. And it appears that it is along this route: specifically southern Missouri, northern Arkansas, and eastern Oklahoma and Kansas where the “delta” variant may be making its earliest impact.

In particular, as noted in This report by a local television station: “The [Missouri] state dashboard says new cases are up by about 20.3% over the past seven days. The positivity rate has jumped 1.2 percentage points in that same time, while tests are down 4.6%.” According to other reports,  “ A swath of southern Missouri is seeing a big rise in coronavirus cases and hospitalizations at just the wrong time – as tourists eager to get out after being cooped up for a year make their way to popular destinations such as Branson and Lake of the Ozarks…..  most southern Missouri counties are well short of 40%. Branson sits in Taney and Stone counties, where the vaccination rates as of Wednesday were 27.4% and 28.4% respectively. Miller County, at Lake of the Ozarks, had a vaccination rate of 22.9%.

“We think that with the Delta variant here, those that aren’t vaccinated are just sitting ducks,” said Steve Edwards, CEO of CoxHealth, which operates several hospitals in the region.

To gauge where the variant may be beginning to show, below are the 17 States where there has been no decline in new cases over the past 2 weeks, divided between those which may have declared premature victory, those where the virus is just as rampant as last summer, and those in between.

There are five States – MO, AR, AZ, NV, and UT – where the virus is just as widespread as last summer: 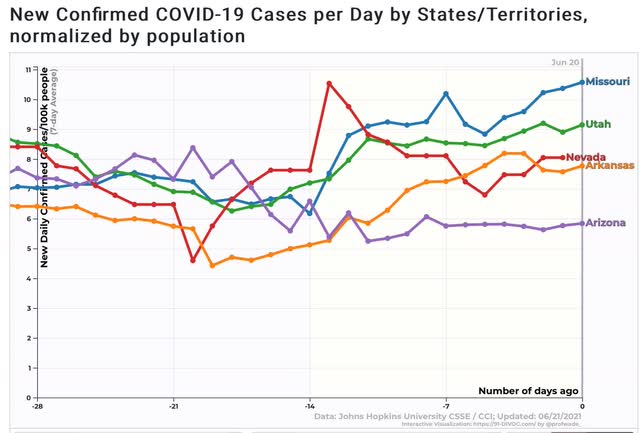 Note that in 3 of them – MO, AR, and UT – the number of new cases has actually risen.
Next, here are the 7 States that may have declared premature victory: 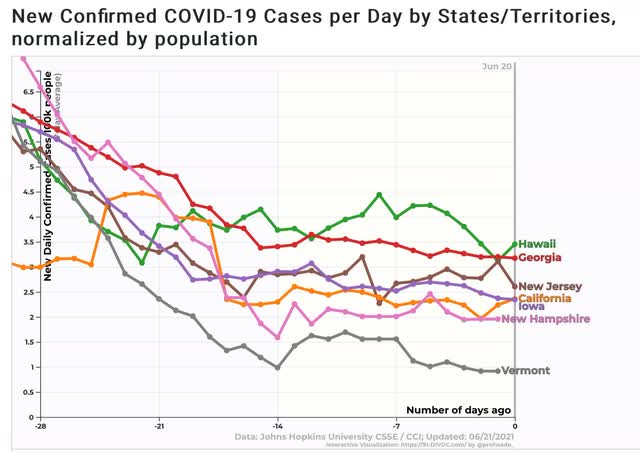 In all of these States, new cases are averaging less than 3.5 per 100,000 daily. At all previous times during the pandemic, that would be excellent. At less than 1 per 100,000, Vermont is outstanding! – but, to be consistent, that rate has not declined in the past 2 weeks.

Finally, here are the 5 States that are in between, all averaging between 4 and 5 cases per 100,000 population daily: 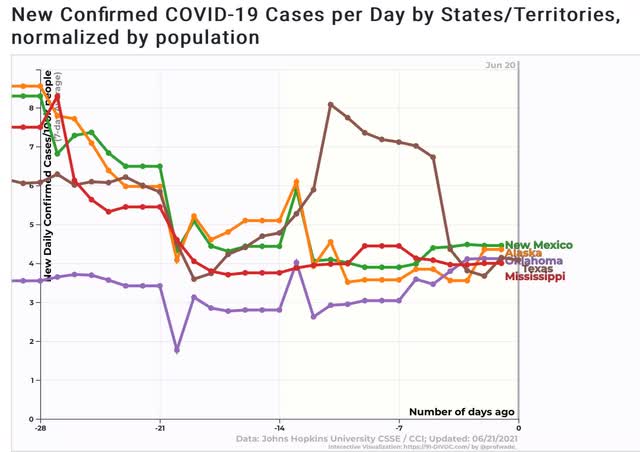 Note that in Oklahoma, and possibly New Mexico as well, cases are increasing.

In particular, three of the States that show increasing new cases – OK, MO, and AR – are contiguous, and all show low vaccination rates.

All of these States bear watching, the ones with higher rates to see how bad the next wave gets, and the ones at the low end to see if their higher rates of vaccinations stem the tide, or whether they too see significant upturns.