Coronavirus dashboard for April 5: the problematic cases of Chile . . . and Michigan

Coronavirus dashboard for April 5: the problematic cases of Chile . . . and Michigan

As you probably already know, the news on the vaccination front continues to be good, as the US is now administering on average over 3 million doses a day – and still climbing. At this rate of improvement, every adult in the US could be vaccinated by Memorial Day at the end of next month.

One bit of not so good news is that the percentage of seniors who have received at least one dose has almost stalled out at roughly 75%. For example, yesterday that percentage improved by exactly 0.1%. If 1/4 of even the most vulnerable population simply refuses to be vaccinated, we are not going to achieve herd immunity.

Further, while in the past few weeks I have been highlighting the success stories in vaccination, particularly in Israel and the UK, there are a number of counter-examples that I want to examine today.

First of all, Chile. Chile has administered even more doses per capita than the US, equivalent to about 55% of its population vs. 50% for the US. And yet both cases, and with about a 4-week delay, deaths, have both risen about 50% from the date that vaccinations started to be administered: 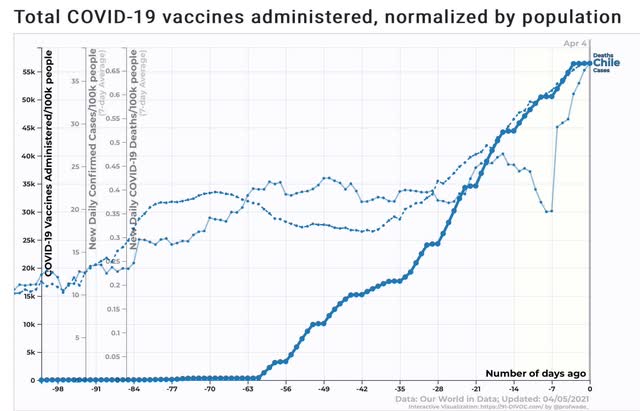 It’s possible that Chile’s trend is being affected by the fact that it is in the Southern Hemisphere and has entered autumn.

But there are several other countries, in the Northern Hemisphere, that are among the top 10 per capita for administering vaccines among more populous countries, who are undergoing similar surges – Turkey, France, Belgium, and Poland: 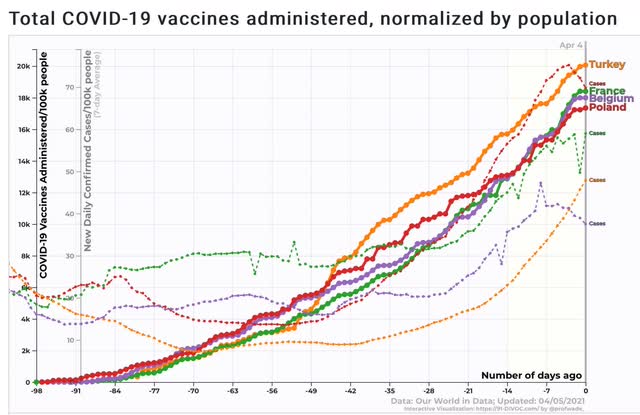 Cases are up 50% to 100%, in the case of Turkey, since the vaccination programs began.

The situation, alas, is similar in some US States, particularly Michigan, NJ and NY, where despite doses equivalent to about 1/2 of their populations having been administered, cases have risen by about 10% in NY, 20% in NJ, and 500% (not a typo!) in Michigan: 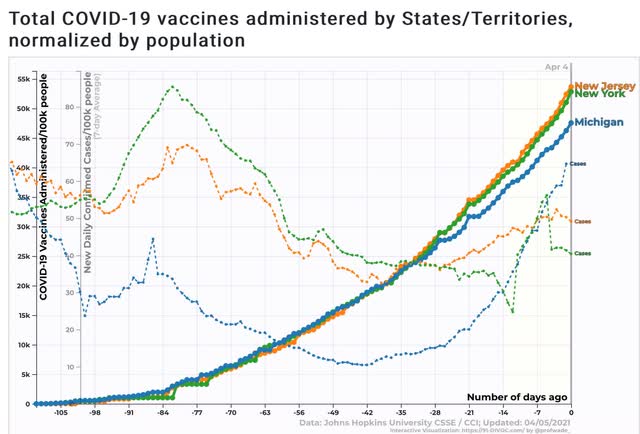 Deaths in NY and NJ have not risen, at least not yet, but they have plateaued: 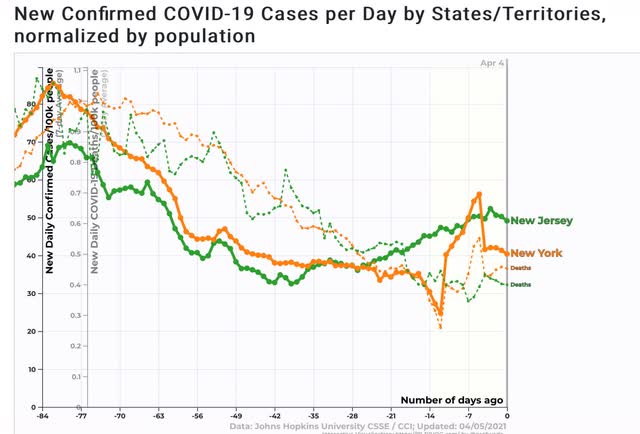 And in the case of Michigan, deaths have followed cases by 28 days both on the way down, and now on the way back up: 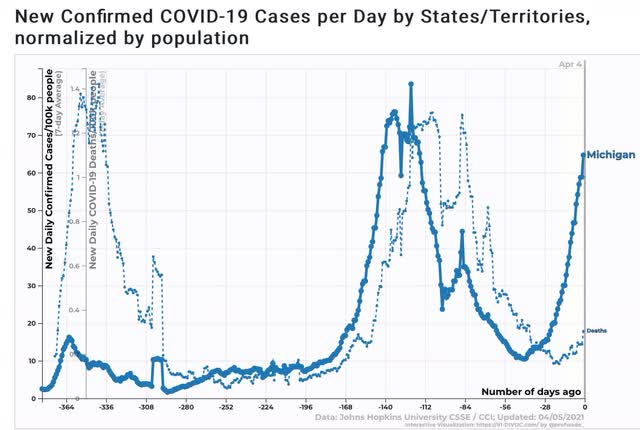 This week is going to be the acid test for Michigan because it was 4 weeks ago that cases started to really increase exponentially. If deaths follow this week, then by the end of this month Michigan could be back to its worst levels of the entire pandemic.

What this means, I think, is that relaxing too early – even with a large percentage of the population having received at least one dose of the vaccine – can lead to renewed severe outbreaks. We really, really, really need to get close to herd immunity levels in the next month or two.