“Looting is a natural response to the unnatural and inhuman society of commodity abundance.” — Guy Debord, “The Decline and Fall of the Spectacle-Commodity Economy.”

The photograph used in Andy Warhol’s 1964 print, “Race Riot” was taken by Charles Moore and was published in LIFE magazine in May of 1963. Warhol used it without permission and Moore sued. Eventually there was an out-of-court settlement. The scene depicted was not a “Race Riot” as Warhol’s presumably ironic title claimed. It was a police attack ordered by Police Commissioner “Bull” Connor on a nonviolent demonstration in Birmingham, Alabama. 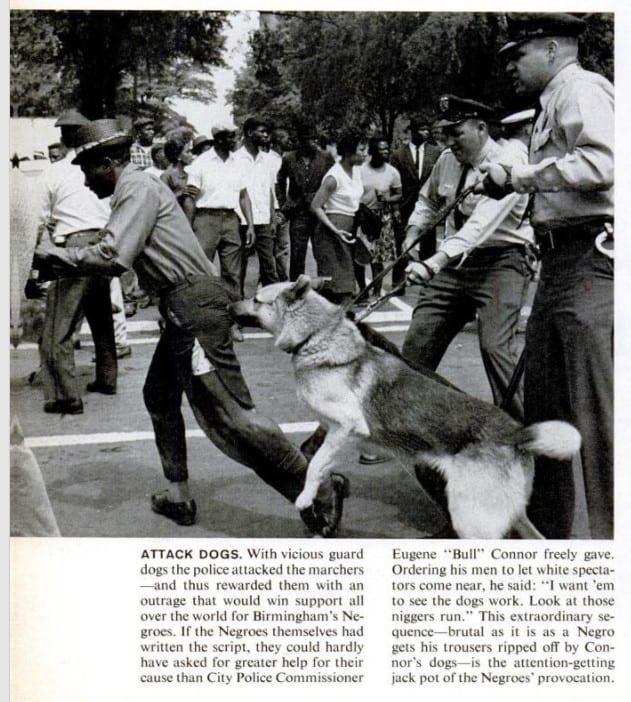 The text in the LIFE feature where the Birmingham photo appeared claimed that Martin Luther King Jr.’s strategy of nonviolent direct action invited police brutality and “welcomes it as a way to promote the Negroes’ cause.” 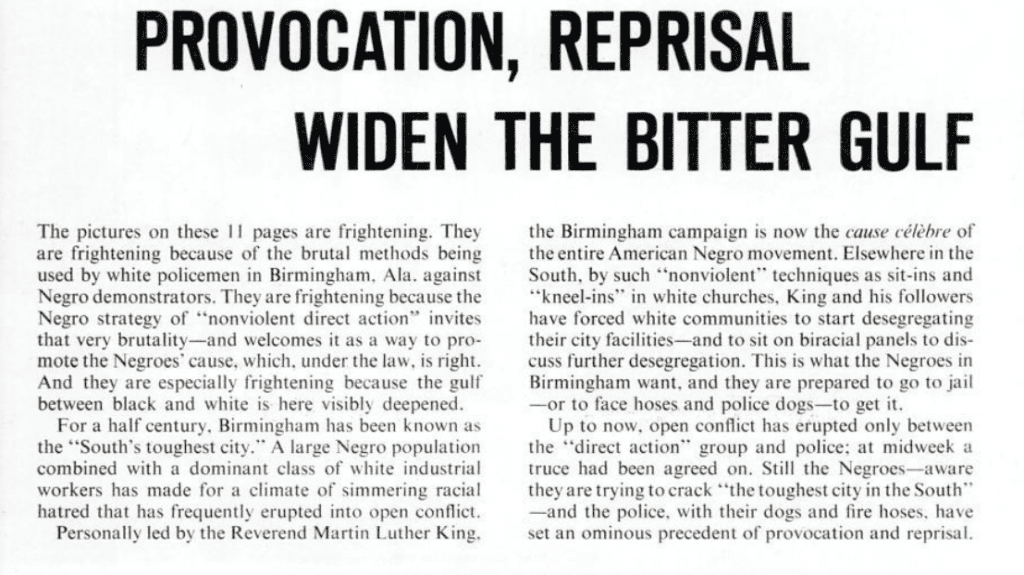 Excuse me? Nonviolent protests invite police brutality? Where have we heard that legend before? Remember, though this was the voice of liberal journalism “sympathetic” to the civil rights cause.

Sometimes a moment of clarity strikes when I see an absolute denial that there can be any justification whatsoever for some action or expression. This happened in response to the outrage provoked by an NPR interview with the author of a recent book that offered a defense of looting. Intuitively, I would consider looting to be troubling, frightening — something I would rather have nothing to do with. But utterly, completely indefensible?

The virulence of the rejections made me curious. I’m familiar with affirmative historical analysis of other “indefensible” actions. People may be familiar with the writing on rioting by Charles Tilly, E. P. Thompson, Eric Hobsbawm, Peter Linebaugh, Nick Blomley and others. But these focus mainly on pre-modern or early modern episodes. As a phrase in Hobsbawm’s classic essay “The Machine Breakers” suggests “collective bargaining by riot” was seen by him as anticipatory of later trade union strikes.

I found the NPR interview somewhat flippant. Perhaps I’ll return to that eventually. But in searching for affirmative analyses of 21st century rioting and looting I found some very interesting leads: Riot. Strike. Riot: The New Era of Uprisings by Joshua Clover, “Why is there no just riot theory?” by Jonathan Havercroft and, last but not least, the prophetic essay by Guy Debord alluded to in the title, “The Decline and Fall of the Spectacle-Commodity Economy.”

The latter article focuses on the Watts riot of 1965, which becomes eerily contemporary in the era following the murder of George Floyd. Just three weeks before he was assassinated, Martin Luther King Jr. acknowledged the inevitability, if not the legitimacy, of riots as “the language of the unheard.” Yet 55 years after Watts it remains politically obligatory to unequivocally denounce riots and looting as having nothing to do with legitimate, peaceful protest. Talk about your “political correctness” speech police! To even question this knee-jerk denunciation is seen as “glorifying violence.”

In an early Gallup question on the issue, Americans were asked whether tactics such as “sit-ins” and demonstrations by the civil rights movement had helped or hurt the chances of racial integration in the South. More than half, 57%, said such demonstrations and acts of civil disobedience had hurt chances of integration, while barely a quarter, 27%, said they had helped. 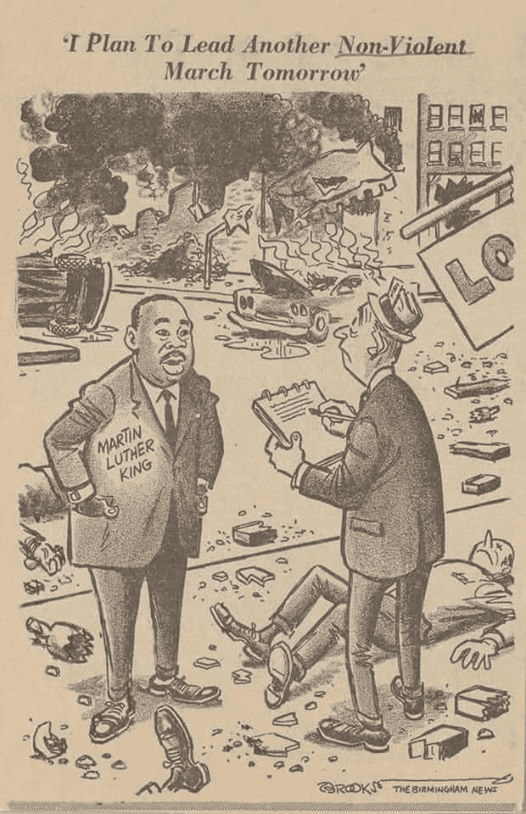 ‘I Plan To Lead Another Non-Violent March Tomorrow’ is the caption of a 1964 cartoon from the Birmingham News by Charles Brooks. Judging from a wider sampling of Brooks’s work, he was a “moderate.”

A couple of novelists from back in the day wrote some interesting observations about questions. In Gravity’s Rainbow, Thomas Pynchon wrote, “If they can get you asking the wrong questions, they don’t have to worry about answers.” “In the realm of totalitarian kitsch,” Milan Kundera wrote in The Unbearable Lightness of Being, “all answers are given in advance and preclude any questions.” Kundera went on to define kitsch as causing “two tears to flow in quick succession. The first tear says: How nice to see children running on the grass! The second tear says: How nice to be moved, together with all mankind, by children running on the grass! It is the second tear that makes kitsch kitsch.”

There is also a kitsch of righteous indignation: the denunciation of the cowardly terrorist or, closer to home, of the rapacious extractive corporation. Or maybe it’s the $62, 885,000 sale in 2014 of an Andy Warhol print titled “Race Riot.” This is not to say that corporations are not rapacious or terrorists not cowardly for targeting innocent civilians. But those actions are at least explicable even if they’re not justifiable. Rioting and looting are commonly denounced as not only violent and “counterproductive” but as mindless and incoherent.

But what does all this have to do with environmental sustainability? As Joshua Clover points out, “It matters little whether one conceives of climate collapse as cause of refugees, or refugees the source of resource burdens. In the present world, immigration has become an ecological fact, ecology a matter of immigration.” This is also true for racialized class stratification. Our present mode of circulation of commodities requires expansive policing, both of borders and of internal, “disadvantaged” communities. Mass incarceration is a feature of the Spectacle-Commodity economy, not a bug. And a print of a photograph of police attacking civil rights protesters can fetch $62,855,000. Sixty-two million, eight-hundred and fifty-five thousand U.S. dollars. And no cents.

It is logical to make legal appeals regarding legal questions,” Debord wrote, “What is irrational is to appeal legally against a blatant illegality as if it were a mere oversight that would be corrected if pointed out.

Much of the conversation of environmental sustainability revolves around the question of how to educate and persuade consumers, policy makers or industries to act more intelligently and responsibly toward the environment. What if we are asking the wrong questions? 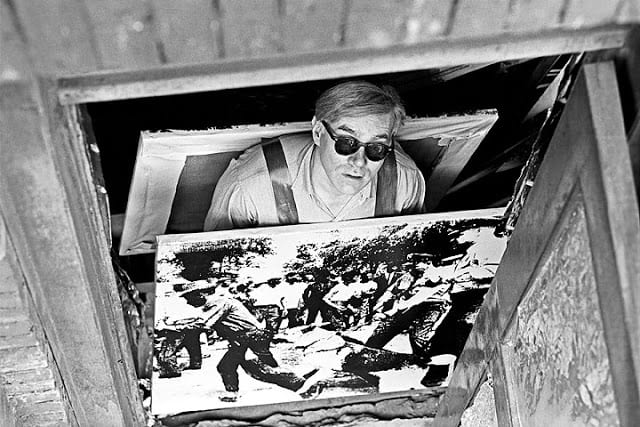