Never thought of myself as a global traveler. My kids kind of mentioned it as I was always bringing something home for them and my wife. I did ship home a Tang Dynasty tomb horse and drummer 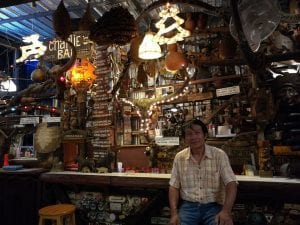 from Hollywood Road in Hong Kong.  Can not say I am an Indiana Jones type taking artifacts which belong in museums.

After working a 10-12 hour shift with the Thai, we would go to dinner, eat Thai and relax. This was one of the places we would go to, which was a short walk from the Landmark Hotel. Nothing special and just unique as a Thai bar for foreigners, which offered bourbon and whiskey as well as other liquors. Most of it was around 100 baht and cheap. Charlie is sitting in front there.

The original bar was demolished due to new developments coming into play. They also took out a lot of nice local restaurants at the same time. Charlie relocated and opened up again.

A plethora of pictures here of the old bar spanning a couple of decades. Fun place to hang in till bed time.