Coronavirus dashboard for April 9: Are new cases peaking? Or is a lack of testing failing to pick up continued spread

Coronavirus dashboard for April 9: Are new cases peaking? Or is a lack of testing failing to pick up continued spread

Here is the update through yesterday (April 8) (NOTE: significant new developments in italics)

The exponential growth rate began to fall from 35% on March 24. It now looks like in the past 10 days or so it has been in a new, slowly decelerating trend, declining by between -0.5% and -1%/day. Here’s a good graph of that trend if a few days old: 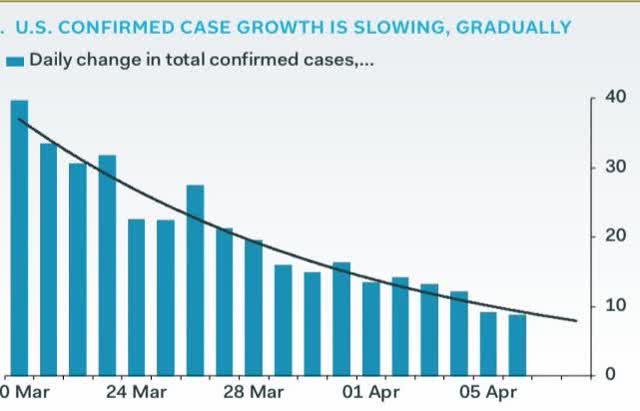 State lockdowns appear to be working.
Ben Engebreth is tracking coronvirus infection and testing numbers for each State, with graphs, here. Also, there is an awesome interactive tool to measure infections and other data for various countries and US States at 91-divoc.com.
Number of deaths and infections and rate of increase of testing (from COVID Tracking Project)

Result: The rate of testing appeared to be catching up a little bit to the spread of the virus, but has stalled again in the past week at about 140,000/day. It remains far below what is needed, which is probably now at least 250,000/day, and is falling further behind.

In South Korea, where aggressive testing has led to a near-total disappearance of new cases, the inflection point where the number of new daily cases plateaued was reached when the ratio of tests to new cases found reached 15:1. Any ratio less than that suggests that not enough testing is being done. Yesterday’s ratio of 4.6:1 is not only far behind, but has gotten worse in the past 4 days. I am very concerned that we face a situation similar to what we had a month ago, where insufficient testing was hiding the spread of the virus. That the percentage of positive results to total tests keeps rising only heightens that concern — i.e., we are not looking for new potential breakouts.

US States and population in total lockdown, business lockdown, and partial restrictions – no changes in past 24 hours 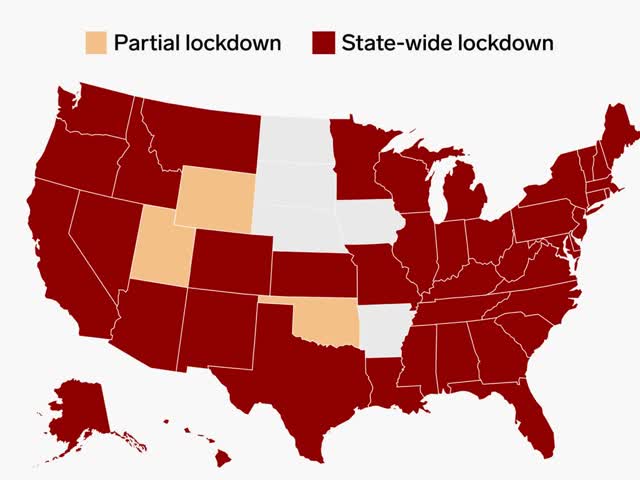 There have been no meaningful changes in the past day.

Here’s how we stand (meaningful new developments in italics):