A “Wild and Dangerous” Scheme, Part Two: What’s “fixed” got to do with it? Do with it?

“…we have seen a calculation… which shows that the fixed charges, for machinery and the general management of a mill, are as nearly as possible equal to the cost of wages in the process.”

In my earlier post on the “Wild and Dangerous Scheme” I teased the “egregious accounting error” committed by the author of the 1844 article in the Economist. In plain terms the error was double counting — the author deducts 16.5% from wages to compensate for a decrease in output and then attributes a second loss of 16.5% to the decrease in output resulting from it’s effect on “fixed charges.”

That double-counting error seems self-evident to me but there is also a semantic smoke screen at play that obscures it for some readers. The term “fixed charges” seems to refer to an immutable absolute quantity of costs and — implicitly perhaps? — an unalterable production process. It doesn’t. It refers to accounting entries, as the term “charges” indicates.

The fact that these charges are independent of output doesn’t mean they can’t change or can’t be changed. Machines could be bought or sold. Inventory levels could be raised or lowered. Insurance rates or taxes could change. Most importantly for the current example, the elements of the production process could be permanently altered thus requiring a reconfiguration of those “fixed” charges.

The double-counting error in the 1844 article is perhaps best illustrated in the case of a Six-Hour Bill instead of a Ten-Hour Bill. Instead of reducing the workers’ weekly wage to zero, the employer could simply cut their wage by 50% and hire a second shift to maintain output at full capacity. By the same token, a reduction from 12 hours to 10 hours could be met by hiring more workers to make up the lost output or by employing some combination of new machinery and additional workers. This is, of course, granting the author’s assumption of a constant output per hour worked.

What does “fixed” even mean? Could it mean fixed per unit of output? Fixed per employee or per hour worked? Fixed per longer unit of time, such as a year — or 15 years? Never changing? It could mean any of those. Whether it does mean one or another is a matter of fact or convention. Sometimes the convention is not what you might want or assume it to be.

Are raw materials a fixed cost? Common sense might suggest that reducing the output of cloth by 1/6 means that only 5/6 as much cotton will be needed as input. Not a fixed cost? But what if the accounting convention specifies a given inventory of cotton regardless of how much is actually used in a week? Are interest rates “fixed”? They are and they aren’t!

When an accounting error is obscured by a muddled allusion to fixed charges, the temptation may be to try to “make sense” of the author’s argument — to give the benefit of the doubt that the author may be wrong but not incompetent or deliberately deceptive — in effect, to excuse the bad accounting by virtue of the muddled semantics. Wildly and dangerously enough, though, in the case of the 1844 Economist article, I happened to stumble upon the receipts: the calculation which that article’s author refers to having seen.

As it turns out, the “fixed charges, for machinery and the general management of a mill,” were not “as nearly as possible equal to the cost of wages in the process.” They were more nearly equal to the cost of wages of a mill operating at half capacity and thus paying half wages! We now confront three problems with the argument — double counting, semantic muddling and misrepresentation of a source. 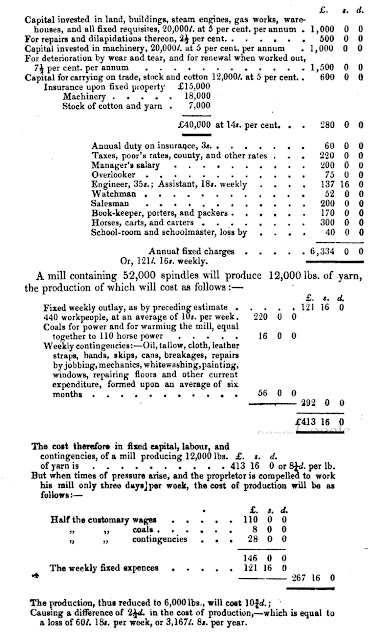