We have our first bits of forward-looking data for the year: November residential construction, December ISM manufacturing, and December light vehicle sales. They paint a decidedly mixed picture. Let’s take a look in order.

Residential construction spending improved by a strong 1.9% in November. Further, October, which had originally been reported as a decline, was revised to a 0.7% increase:

Housing is recovering from its early 2019 slump thanks to the decline in interest rates. This is a tailwind for the economy as we get into the second half of this year.

On the other hand, the ISM manufacturing index, and its more leading new orders component, declined to critical levels in December, at 47.2 and 46.8 respectively: 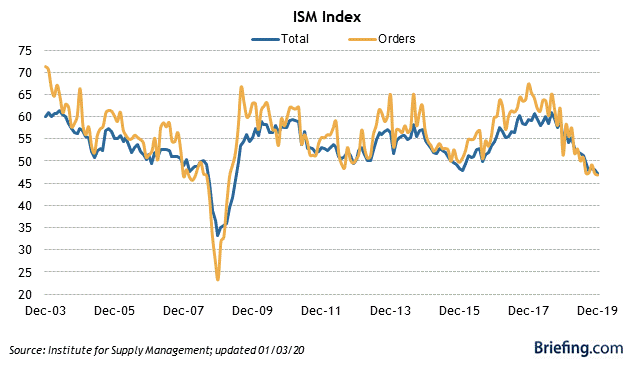 Over its 70+ year history, a decline below 48 in the overall index for two months has historically indicated that a near-term recession is more likely than not. Note, the ISM says that a reading below 42 is consistent with a *concurrent* contraction. So, Q4 GDP is forecast to improve by this metric. What I am saying is that we are very close to the tipping point where a Q2 or Q3 2020 contraction is forecast.

Finally, with the important exception of Ford, which will report today, we got December car and light truck sales on Friday. The reports I’ve seen have this variously between an annualized 16.7 and 17.0 million vehicles, which would put the number in the middle of the last 12 months in the blue line in the graph below (through November):

That’s mediocre, but not at the -10% off peak that has typically occurred before the onset of recessions in the last 40 yeas.

Note that the more leading and decisive heavy truck sales took a major spill in November. That might be a one-off due to the GM strike. I have seen no reports at all for December yet. Hopefully we’ll get that number today, and if so, I’ll update this post.

In short, January starts out with a forecast for some tough sledding in the first half of this year, but improvement in the second half (subject of course to catastrophic actions taken by the buffoon in the White House).