We got two contrasting views of the economy this morning. (Tuesday)

First, the good news: residential construction spending increased in July. Below I show it in comparison with single family permits:

Typically construction follows permits. In the past few years, it has been almost coincident with permits. This is more good news for the important and leading housing sector, indicating that the decline that started in early 2018 has ended. With the continued recent further decline in mortgage rates, I expect further advances, although possibly not strong.

Now, the bad news: the ISM manufacturing index fell below 50 to 49.1. Worse, the leading new orders component fell to 47.2, the worst reading since the Great Recession: 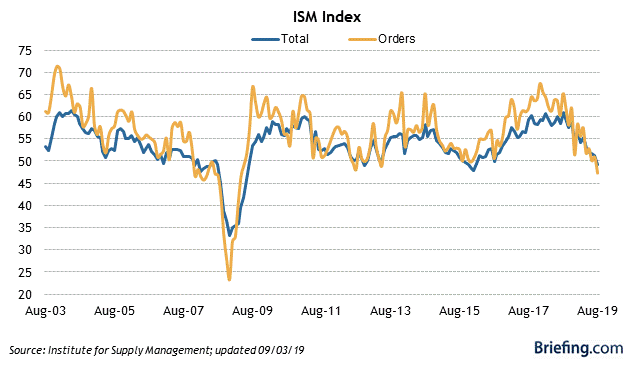 Typically it takes at least two readings below 48 for the ISM manufacturing index to indicate recession. But the new orders index is already at a level which has been consistent over the past 70 years with a recession in the very near future – although it is also consistent, as for example in 1966, with a slowdown only:

Nevertheless, it does tip the balance of short leading indicators from neutral to slightly negative.

The reports, combined, suggest that in Friday’s jobs report there should be a little improvement in residential construction jobs, but suggest a decline in manufacturing jobs – something that has been loudly telegraphed by the decline in the manufacturing work week in the past year.
Comments (2) | Digg Facebook Twitter |
2 Comments