“The court found that Johnson & Johnson’s actions had created a “public nuisance,” which Oklahoma law defines to mean an act (or failure to act) that ‘annoys, injures or endangers’ the health and safety of an ‘entire community.’

In a 42-page opinion, Oklahoma State Judge Thad Balkman details how Johnson & Johnson’s sales and marketing assured doctors the appearance of addiction in patients due to the use of J & J opioid products was actually evidence of ‘under-treated pain’ and required the prescribing of more opioids. Sales representatives used these aggressive marketing tactics to target prescription-happy doctors referred to as ‘Key Customers’ in internal correspondence.”

I can not help but feel there comes a time when one must look at the continuing misuse of opioids under a doctor’s care and wonder what the doctors were thinking.

Multiple times I have written on the deadliness of opioids. To market and promote the use of opioids, the pharmaceutical industry deliberately took one sentence of a letter written by Doctors Porter and Jink to the NEJM in 1980 and claimed the use of opioids as safe in all environments and not mentioning Porters and Jink’s study was done in a hospital setting.

Addition Rare in Patients Treated with Narcotics, NEJM 1980: “Recently, we examined our current files to determine the incidence of narcotic addiction in 39,946 hospitalized medical patients who were monitored consecutively. Although there were 11,882 patients who received at least one narcotic preparation, there were only four cases of reasonably well documented addiction in patients who had no history of addiction. The addiction was considered major in only one instance. The drugs implicated were meperidine in two patients, Percodan in one, and hydromorphone in one. We conclude that despite widespread use of narcotic drugs in hospitals, the development of addiction is rare in medical patients with no history of addiction.” Boston Collaborative Surveillance Drug Program, Boston University Medical Center, Waltham NA 02154

From 1980 till 2015 the letter was cited 491 of 608 times affirming the use of opioids does not cause addiction. There was a significant increase in citation after the introduction of OxyContin in 1995. The “median number” of citations of a NEJM letter was 11 times in total. The citation of one sentence in whole or partially was many times more.

“In Prescription Painkiller Addiction: A Gateway to Heroin Addiction,” Recall Report documents the start of the explosion in opioid use tying it to the introduction of OxyContin by Purdue Pharma in 1995/96. 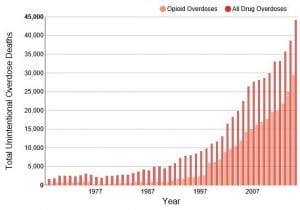 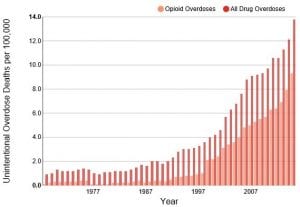 Up till seeing the Joint Committee data, I had not seen earlier data. In these charts can be seen the additional yearly data predating 1980 when the Jick and Porter letter had been written to the NEJM going back as 1968. This data is important to see the magnitude of the introduction of prescribed opioids such as Oxycontin and the influence of them and the pharmaceutical industry on the usage of opioids said to be a safe drug to use outside of supervision.

State Judge Thad Balkman’s verdict will be appealed in higher state courts. If upheld, it will go to the federal courts. J & J is not a company without financial resource and they will contest this verdict as far as they can take it. The importance of the verdict is in holding a company, a citizen amongst us as declared by SCOTUS responsible for the abuse of opioids as shown in the numbers presented in this post, in earlier posts, and in the related documentation presented in all of my posts on opioids.