This is a surprising result that is worth noting: the San Francisco Fed found that the increase in prime age labor force participation in the past five years has not been due to new people being drawn into the labor force, but rather by a very large decrease in people leaving it: 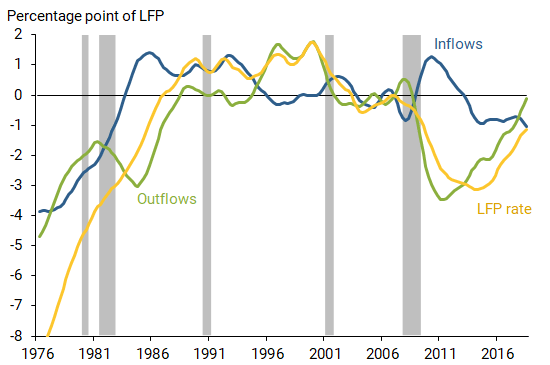 [Note: keep in mind that prior to the early 1990s, both inflows and outflows are increasing due to the secular trend of women entering the workforce.]

Why is this surprising? Because you would think that increased wages would draw people on the sidelines into the workforce. This is something I’ve looked at a few times in the past several years, and the pattern has been clear:

2. Once the unemployment rate declines enough, the decline in labor force participation decelerates, but nevertheless continues.

Here’s a graph showing this relationship since 1994:

The San Francisco Fed says that the reason for the big decline in outflows has been the ease of finding a new job, although that appears to be speculation. It might be that improved wage growth is something that is noticeable to people already in the labor force, rather than those presently outside of it.

Anyway, a counter-intuitive result worth noting.