Manufacturing slowdown apparent, but no contraction

Manufacturing slowdown apparent, but no contraction

With yesterday’s ISM report for manufacturing in March, let’s take an updated look at this sector, with a particular emphasis on what to look for in this Friday’s jobs report.

The ISM manufacturing index, and its more leading new orders sub-index, both continued positive in March, with the former at 55.3 and the latter at 57.4. Both of these are good, solid, positive numbers. Here’s the updated graph from Briefing.com: 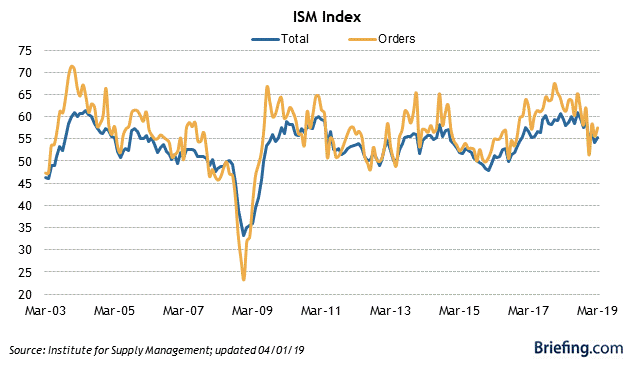 Although as noted above, these are positive numbers (any value above 50 indicates expansion), the last few months have shown a considerable slowdown from the red hot pace of expansion one year ago. This is in line with the five regional Fed reports, which have also slowed to very tepid – but still positive – readings in the last few months.

As I wrote last week, I am expecting a slowdown in employment growth. This is particularly true as to manufacturing and other goods-producing jobs. Here’s two graphs going back nearly 60 years of the spread between 10 year and 3 month treasuries (blue) and the YoY% change in goods producing jobs (red):

Note that in *every* case that the interest rate spread has inverted, or just decreased to nearly zero, within about 18 months YoY growth in goods-producing jobs has declined to less than 0.5%, and usually outright declined. That translates to an annual pace of not more than 7000 goods producing jobs a month. By contrast, in the past several years at least 20,000 goods productions jobs have been added virtually every month:

So if history is a guide, a sharp slowdown in goods producing jobs growth should begin very soon, if not having already begun in February.

In addition to watching for poor manufacturing and other goods producing jobs growth in Friday’s employment report, an even more forward looking indicator is the average manufacturing work week, which tends to decline even before jobs do. Here’s the history of that number over the past 35 years:

Although it wasn’t the case in 2007, usually the average manufacturing work week declines by nearly an hour if not more before a recession begins.

In the past 10 months, this has declined by -0.6 hours. Any further decline this Friday would be cause for significant concern.