Don’t blame me. Blame Noah Smith who asked me to write more about MMT. I don’t know much about MMT, but I am going to write about it anyway.

First, there seems to be an extremely important disagreement between MMTers. There are definitely some that argue that MMT implies the US Federal Government can (and should) spend more without taxing more.

In contast Stephanie Kelton who seems to be a rather prominent MMTer clearly asserts that a major increase in Federal Government spending should be accompanied by increased taxes here
“MMT would set public spending always to the level required to achieve full employment, and then accept whatever deficit may result.”

Now she might consider 4% to be higher than the current US non accelerating inflation rate of unemployment, but I don’t think she thinks it is much higher. Basically, her position is that the current amount of spending is about right. Low unemployment and stable inflation. As far as I know, MMTer’s accept that as a sign of good macro policy. So they should consider a big increase in spending inconsistent with MMT.

I think I understand what is happening here. There was a decade of high unemployment. People advocated policy based (at least in part) on the need for stimulus. Now the US has low unemployment. Serious policy analysts change their proposals given changing conditions. Many other people stick to a proposal when it makes no sense. I don’t want to be rude but consider the W Bush tax cuts which were proposed because the economy was booming, there was a surplus, and then justified as an anti-recession measure. They claimed that the same policy was perfect to solve different problems. He started with a decision to cut taxes on the upper tail (his words) and then looked for justification. Spend till we reach full employment, no spend a lot more on say a green new deal now that we have reached full employment may be “leftist,” but it has nothing to do with any economic theory (because the two statements are contradictory).

I think it is very very slightly unfortunate that MMT has been equated with “deficits are never a problem”. MMTers might say this from time to time, but they definitely also say that deficits can be a problem (when inflation is accelerating).

Given what I wrote above, the implication of MMT I have noted so far is that one should not impose austerity during a recession. Sadly, policymakers disagree. But conventional new Keynesians and conventional Paleo Keynesians agree. There is no daylight between MMTers and conventional Keynesians on what fiscal policy should have been in the recent past and should be now (although there is a huge range of views among MMTers — I mean differering by hundreds of billions a year).

OK what else. MMTers seem to argue that monetary policy is ineffective even when the safe nominal interest rate is positive. I think this is nuts. I think the evidence that it matters is overwhelming. US data from January 1 1980 throught December 31 1982 are enough to prove them wrong.

One of them wrote that monetary policy works by making people borrow. Notice that it is just assumed that macro policy is stimulus. The possibility that an economy might overheat and the policy aim to reduce demand has not come to the mind of the person whom I am quoting (whose name doesn’t come to my mind). Assuming that macro policy must or should always aim to stimulate demand is an embarrassing mental slip.

MMTers note that deficits can be monetized. They note that this implies that countries which borrow in their own currency are not anywhere close to risking default. I agree (the anywhere close is because I think a US debt of $ 1 quintillion in the form of 1 day notes would cause default — I am very reluctant to use the word “impossible”). Here again the position is completely conventional. Not only Keynesians but also Austerians think this. It is just that to Austerians fiscal dominance of monetary policy is a nightmare. I don’t think any macroeconomist thinks it is impossible.

So far we have conventional views and claims about monetary policy which might be accepted by fresh water fanatics but which are inconsistent with the historical evidence.

This is a distinction without a difference. It is purely semantic dispute about the definition of deficit spending. The disagreement does not imply different forecasts about observables. I think the fact that MMTers consider this a vitally important distinction implies that they won’t be able to make a useful contribution to the discussion.

Also I read things about the purpose of a bond auction and the natural gravitational effect of deficit spending. I think these are not meaningful statements in social science. I think there is no way to test if they are true. I think there is no way to get testable hypotheses using this kind of reasoning (I use the term “reasoning” in the broad sense of something that someone seems to think has something to do with useful thought).

I guess there is also a discussion of what comes first the bond sales or the government spending. Here I think I recall the word “first” but I know it isn’t about which happened at an earlier time (bond sales happen every week, government spending every minute). It isn’t a statement about causation either. I don’t think it is a meaninful statement.

So I see conventional views, confusing jargon, and meaningless distinctions. Also extreme rudeness. I don’t think that this is (or should be) typical academic debate 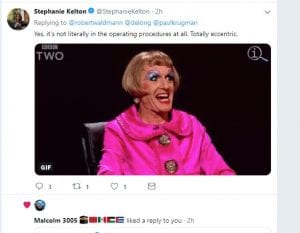