Click on the picture to get a great, detailed view of these magnificent and architecturally significant structures. 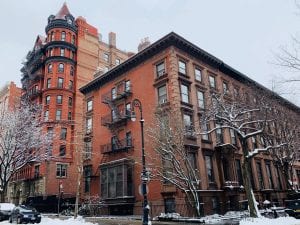 Claude Scales’s Photo of the day: there is a lot of Brooklyn Heights literary history in this photo.

The poet W.H. Auden lived in the top floor apartment of the brownstone row house at One Montague Terrace, nearest the corner of Montague Street and Montague Terrace, in the winter of 1940-41 when he wrote his “New Year Letter.” If you go to the right two doors, to 5 Montague Terrace, you find the house where Thomas Wolfe (not to be confused with the recently deceased Tom Wolfe) worked on his novel “Of Time and the River.” On the left of the photo, the building with the cylindrical tower and turreted top is where the playwright Arthur Miller and his first wife, Mary Slattery, lived during the early years of their marriage, and where he began work on his first Broadway play, “The Man Who Had All the Luck”. — in New York, New York.

Love the buildings and maybe because I worked on a few similar to them using rope or cable suspended scaffolds and ladders in downtown or near downtown Chicago. Harvard attorney Claude Scales is the photo-artist-author of this snapshot and commentary stolen from Facebook. I know him from when I would comment at Slate Magazine (along with JackD) when it was a cool place to be. Editor Moira Redmond (not to be confused with the English actress) described the Best of The Fray site, “the place I would tell the other editors to go to if you wanted to find out what Americans were actually thinking.”