The Key to Gentrification

The Key to Gentrification

In the world of urban politics, there is probably no more potent populist rallying cry than the demand to halt gentrification.  Activists have fought it on multiple fronts: zoning, development subsidies, permitting, rent control—every lever housing policies afford.  But what if they’re mistaking cause for effect, hacking away at the visible manifestations of the problem while leaving the problem itself intact?

Pivot to an important article in today’s New York Times, reporting on recent research David Autor  of MIT presented at the economics meetings in Atlanta earlier this month.  It’s all summed up in this set of charts: 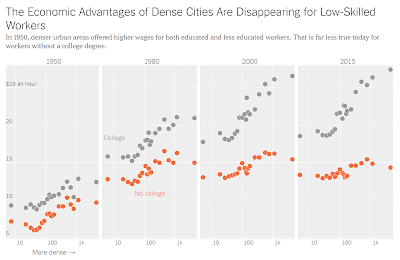 As you can see from the tiny print at the top, the data are being read horizontally within each chart, from less dense regions (rural areas) on the left to high density cities on the right.  The question being asked in the article is, if you live in a rural area or a small town, how much benefit can you get from moving to a big city?

In the early post-WWII period, the answer was “a lot” for both the majority holding only a high school diploma and the few with a college BA.  By 2015 the situation had changed: it was still a good move for college grads but there was little to be gained by those with only a high school education—and probably even less when you factor in the increased cost of living.  That’s an interesting story.

But there’s another way to read these charts, vertically, comparing wage gaps at any particular time and place between these two education-defined groups.  In 1950 the gap was relatively small; in the densest cities the college crowd made about 30% more per hour than the high schoolers.  By 2015 they made almost twice as much.  And don’t forget that the rise of inequality is virtually fractal: similar gaps have opened up within the top 20%, and within the top 5%, 1% and .01%.  The whole rightward tail of the distribution has elongated, pulling ever further from the median.

The distribution of income is reflected back to us in the distribution of housing.  High income households want big, fancy digs—not only in the suburbs as in the halcyon Ozzie and Harriet days, but also the urban core as touted by the “new urbanism”.  They will bid up the prices of existing dwellings, retrofitting them to meet their lifestyle demands.  Developers will be eager to build new units for them, creaming off their share of these high incomes.  To do this they will buy up working class housing for the purpose of tearing it down and building the expensive stuff.  Of course, upper income people want amenities suited to their means, so hardware stores and shoe repair shops give way to high-priced cafes, galleries, and boutiques for displaying elegant leather, wool, and felted clothing items.

Gentrification is simply the visible urban face of rampant income inequality.  As Autor’s data show, it’s especially intense in high density regions.  The use of housing development and rental regulation can slow it somewhat and change the form it takes, but wealthy people will always find a way to spend their money on expensive accommodations and amenities; that’s why they went through the effort to get wealthy (or why their parents and grandparents did).  A democratic city, with diverse neighborhoods and a high quality of life for all, can’t rest on a plutocratic distribution of income.  To put it differently, once we bring about much more even economic rewards in our society we’ll be able to look forward to new urban development with hope and anticipation rather than dread.