As I wrote a few weeks ago, whatever message Congressional GOPers might have wanted to put out (like, “our tax cuts helped spur the best economy in years!”) got stomped on by Donald Trump.

As it turns out, (please be sitting down for this) he was being truthful when he talked about momentum having been going his way. Here’s Gallup’s weekly polling through last Sunday:

Until the bomb attempts and several mass shootings derailed things, his approval ratings in the weeks following the Kavanaugh confirmation were the best since spring 2017.

Then, during the week of actual and attempted mass murder he went down 4 points.

Trump blamed the press (and even the victims for not having armed guards in their place of worship!), and amped up the anti-immigrant volume, thus guaranteeing the the ugliest face of the GOP is what has been last shown to the public before Tuesday’s polling.

I’ll update this post with Gallup’s final pre-midterms weekly number when it comes out tomorrow.

By the way, Gallup also supplied a nifty chart of Presidential and Congressional approval for each of the last 10 midterms in addition to current polling: 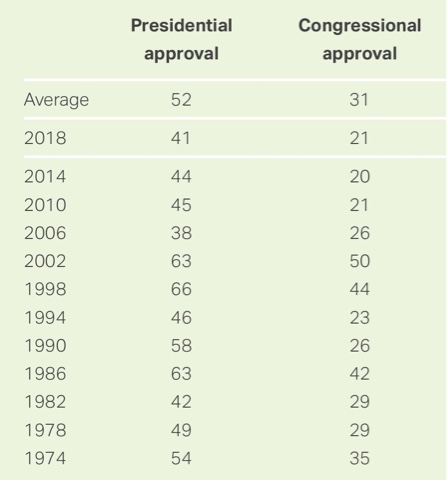 Just based on those numbers, I would expect the incumbent President’s party to take a pasting.

We ought to get some clues from some east coast races early Tuesday night. So here’s a handy list of the tightest ones, that I will be particularly watching:

Outside of California and a few seats in the upper midwest, the east is really where most of the action is in the House of Representative races. If there are upsets in the “slight favorites,” that will give us a lot of information as to whether or not there is a “blue wave.” Meanwhile, if democrats lose both “higher favorited” races, their ability to take the House is in real trouble. Contrarily, if the GOP loses one or more the the races where they are “higher favorites,” be on the lookout for a blue tsunami!