A baseline road map for the 2020 elections

A baseline road map for the 2020 elections

Now that the 2018 midterm elections are behind us, let’s take a preliminary look at 2020.
It occurred to me that a decent baseline for that election is to simply take the total 2018 House votes for each state, assume that the Presidential vote in 2020 in each state will be the same, and apply that to the Electoral College. Alternatively, you could use the results of the 2018 Senate races in those states where there were races in 2018, and apply those results for those states. That’s because the midterm turnout approached Presidential election levels, and Trump is going to engender the same intensity in two years as he did this past week.
So, using the 2018 results as the template for 2020, who wins?
It turns out that I wasn’t the only one who had that thought. Nate Silver already had the same idea and did that for the House vote. Here’s what that hypothetical 2020 Electoral College map looks like: 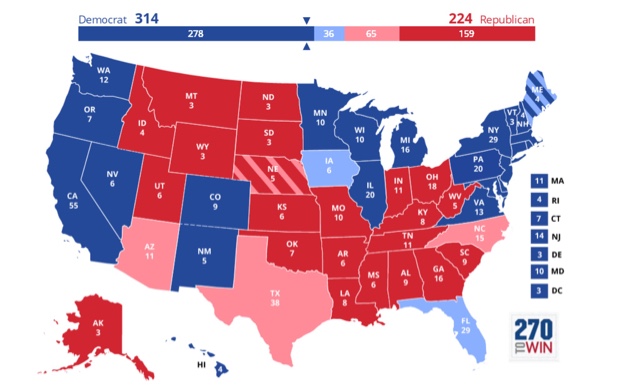 If you apply the 2018 House votes to the Presidency in 2020, the Democratic candidate wins handily.  As Nate Silver points out, it is a virtual duplicate of the 2012 map.
[Before I go further, let me just note that the above House map has a few glitches. Florida only went Democratic when the votes in House districts where there was no GOP candidate are added. Conversely, in North Carolina, there was a House district without a Democratic candidate. If we were to add just 2/3’s of the typical democratic vote in other GOP-dominated districts in NC to that district, then NC flips to the democratic column.]
Next, here’s what the 2018 Senate map looked like a couple of days ago. Since then, it appears that the Democratic candidate won in Arizona. For now, let’s leave Florida alone: 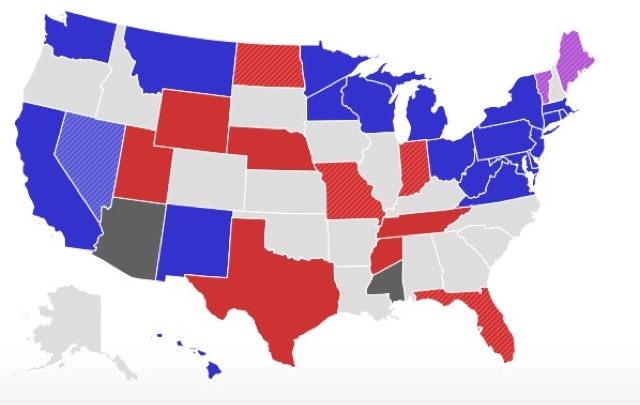 The only changes in the map for 2020 are that Florida flips to the Republican column, and Montana, Arizona, and West Virginia flip to the Democratic column. Again, the 2020 Democratic candidate wins if we apply this layer over the House map.
In fact, even if we give Florida to the GOP, and don’t give Montana, Arizona, and West Virginia to the Democrats, the democratic candidate still wins!
In short, if the 2020 electorate is the same as the 2018 electorate, Donald Trump is going to be defeated.
What this also tells us is that the upper Midwest is not lost to the democrats, and that the “blue wall” states that Hillary Clinton lost — Pennsylvania, Michigan, and Wisconsin — plus Iowa, are the states that the 2020 candidate most needs to focus on. Secondarily, states like Arizona and North Carolina should be targeted for insurance. Florida probably should get demoted to a “plan C” state.
And “urban cosmopolitanism” isn’t going to win back the upper midwest. A similar mix of economic issues (e.g., improving, expanding, and enhancing Obamacare) and social issues (particularly those issues most aggrieving women about the Trump-GOP party) are going to be necessary.
By the way, winning the Presidency in 2020 is not the ball game. There is every reason to believe that a Mitch McConnell-led GOP Senate will engage in maximum obstruction of Presidential appointments. So let’s look at the 2020 Senate map (showing which party won those seats in 2014): 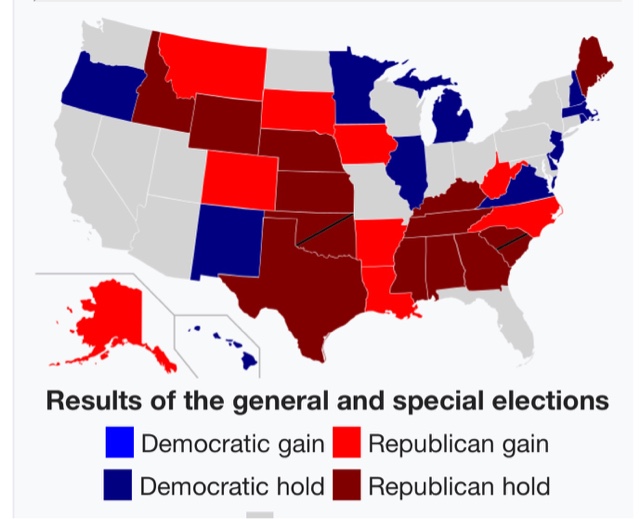 There are a slew of seats all over Dixie and the high plains that simply aren’t competitive for Democrats.  They will probably need to flip at least 3 of the following 6 seats: Colorado, Iowa, North Carolina, Maine, Montana, or West Virginia. That is probably going to remain an uphill climb.
Comments (2) | Digg Facebook Twitter |
2 Comments