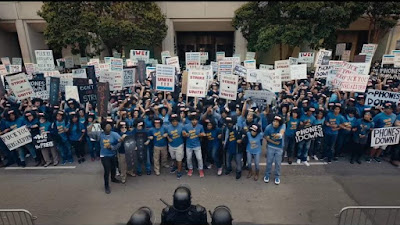 I saw this film several weeks ago and have been meaning to say a few things about it.  Herewith:

1. This is an exceptionally intelligent movie by American standards.  It maintains a high level of wit and observation from beginning to end, and little zingers flash by in almost every frame without announcing themselves.  It speaks up to its audience, something I really appreciate.

2. STBY fits into a tradition of films in which the act of organizing a union and carrying out a job action is held up as a revolutionary political and personal challenge.  Other examples include “Norma Rae” and “Bread and Roses”, but actually I was reminded even more of “The Cradle Will Rock”, at least in spirit.

3. There’s a California, loose-limbed absurdist aspect too.  I was reminded a bit (giving away my age, race and sensibility) of the Firesign Theater.

4. Kate Berlant as the employee motivation hack was perrrrfect.

5. Thank you, Boots, for showing us so clearly the “race versus class” debate is vacuous.  These are not separate things in America.

6. Maybe the horse stuff was a little too much, even for me.

On a serious note, the fundamental question in any strike is whether there will be scabs, and whether the police will push them through the line.  If the job doesn’t require scarce skills, the boss is willing to alienate the workforce, and the power of the state is enlisted to break the strike, it will almost always fail.  (Maybe the only exception is where a boycott of the strikebreaking company can be effective.)  All the politics of labor action swirl around these issues.  Spoiler alert: the intervention of the horse people at the end is not just a plot device, it’s a way to finesse the the central problem labor activism has to deal with in the twenty-first century.  But that’s OK—it’s only a movie.