The Lump That Begot Trump

I don’t want to pretend that this explains everything. But it is “another brick in the wall,” so to speak, if not the keystone. In January 2015, Senator Jeff Sessions produced an “Immigration Handbook for the New Republican Majority,” written by his communications director, Stephen Miller. 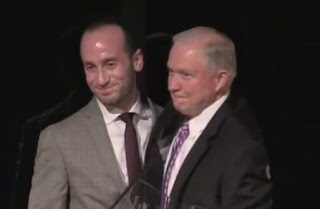 Miller’s analysis in the handbook is just the sort of thing that economists would denounce as a “lump-of-labor fallacy.” Curiously enough, few did. They were much too busy snatching pensions from future old folks on the pretext that older people working longer wouldn’t “steal jobs” from youth.

Here are a few representative arguments from the handbook:

The last four decades have witnessed the following: a period of record, uncontrolled immigration to the United States; a dramatic rise in the number of persons receiving welfare; and a steep erosion in middle class wages. But the only “immigration reforms” discussed in Washington are those pushed by interest groups who want to remove what few immigration controls are left in order to expand the record labor supply even further.

Here are the findings from a poll of likely U.S. voters commissioned by GOP pollster Kellyanne Conway:

As I mentioned above, these are precisely the kinds of arguments that economists routinely denounce as being based on a lump-of-labor fallacy. In fact, although he didn’t use that phrase, Walter Ewing of the American Immigration Council countered the handbook’s claims with one of the fallacy claim’s stock surrogates — the “not a zero sum game” rebuttal:

This is all very well and good… except for one problem: Miller’s and Sessions’s handbook cited an actual “zero sum” of net employment growth for U.S.-born workers:

…according to the BLS, all net employment gains since the recession have gone to foreign workers while 1.5 million fewer U.S.-born Americans hold jobs today than did then—despite the total population of U.S.-born adults increasing by 11 million over that same time.

Well, as the economist says, that may be true in practice but is it true in theory?  There is indeed a gap between what the evidence shows and what it proves. There is no guarantee that if “foreign” workers didn’t take those jobs, they would still be there for U.S.-born workers. Miller and Sessions fill that in with pure supposition. However…

However, in a contest between suppositions based on peoples’ perceptions and suppositions contrary to those perceptions, who do you suppose wins? As I have pointed out repeatedly, the “no zero-sum game” rebuttal, the lump-of-labor fallacy is a red herring. Sometimes there are empirically zero sums and there doesn’t have to be a “fixed amount of work” for the actual amount of work to be deficient. As tendentious as Miller’s and Sessions’s argument may be, Walter Ewing’s rejoinder is no less tendentious — and loaded down with hollow promises and empty platitudes to boot.