Chewing over the message of online job postings

Chewing over the message of online job postings

Here’s an interesting graph I came across yesterday. It’s from the Conference Board. What it does is track the number of job postings online, and breaks them down between first postings and repeat postings: 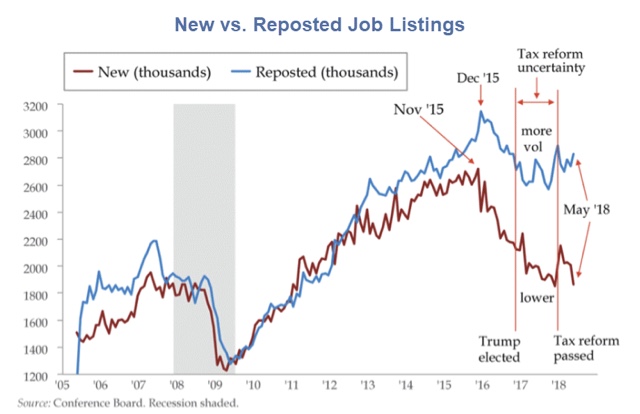 Let me say first of all that it is of limited use. The data only goes back to 2005, so there isn’t much history — heck, online job postings didn’t even *exist* until the end of the 1990s! Further, online job postings have undergone a secular increase, as more and more companies have come to use it — so I would expect the historical trend to be positive.  But has it reached maturity? Or is it still in its growing stage?  I dunno …. and probably neither does anybody else.

But with all those cautions, it struck me that the big gap between first time and repeat postings in of a piece with the gap between actual hires and job openings in the JOLTS series:

In the case of online job postings, the repeat postings are either trolling for resumes on an ongoing basis, or else evidence of inability to find a suitable candidate (at the wage the employer wants to pay) the first time around.

What is also interesting is how the two series converged beginning in 2006 as the 2007 recession approached. Which is what I would expect.  As the job situation softens, I would expect companies to pull back on repostings more than original postings, as they become hesitant to go through with a hire if a good candidate does not appear promptly.

I’m not sure what to make of the decline in both during 2016-17. It certainly was not borne out by other employment data.  But for now, the two series continue to diverge. That does not strike me as a sign that companies are skittish about hiring.